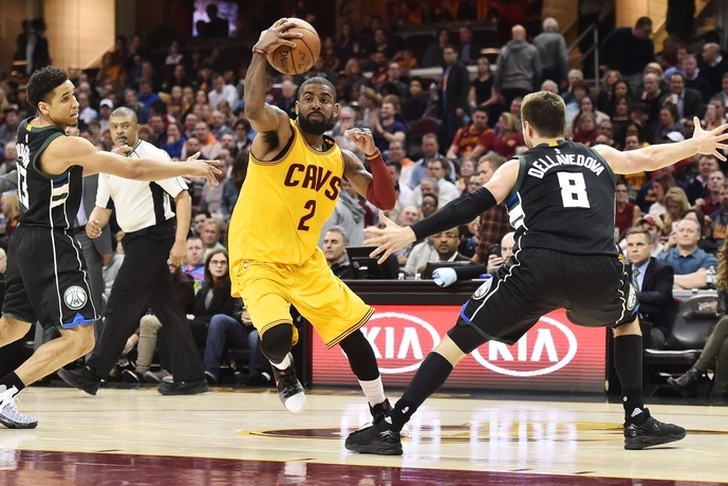 The Cleveland Cavaliers and Boston Celtics continue to work on completing their blockbuster trade before tomorrow's deadline, with the Cavs trying to get an extra second-round pick from the Celtics. However, there is a new wrinkle that could put that trade in jeopardy. We have the latest on that story, as well as updates on the futures of LeBron James and Kristaps Porzingis, in today's NBA Rumors Roundup:

Bucks lurking in Kyrie Irving trade talks
Since the Cavs-Celtics deal has yet to be completed, there is still the opportunity for another team to out-bid Boston for Kyrie Irving. According to ESPN's Zach Lowe, the Milwaukee Bucks are a team that could be lurking in the shadows and take Irving away from the Celtics.

Milwaukee is willing to offer a package centered around Rookie of the Year Malcolm Brogdon and Khris Middleton, but Cleveland also wants a first-round pick from them. The Bucks have been reluctant to include that to this point, yet would be willing to if Irving committed to the franchise long-term.

If they include that pick, there's a chance the Cavs veto the Celtics trade over Isaiah Thomas' failed physical and send him to Milwaukee. However, Irving hasn't shown a desire to re-sign with the Bucks when he's a free agent following the 2018-19 season should a trade happen.

Cavs still believe LeBron James will stay
Cleveland is also concerned about LeBron's future, as he has yet to commit to the franchise past the upcoming season. While the franchise is "no longer investing" hope that James re-signs with Cavs and are planning for a possible future without him, they do believe James will stay with the team, according to FS1's Chris Broussard.

“While the organization is doing their due diligence and being wise in planning for a future without LeBron, I know there are people within that organization that still think he’s not leaving,” Broussard told HoopsHype. “They think this is all just a bunch of drama and talk, and we all know LeBron likes drama. So, again, we don’t know. But if I had to make a pick, I would say he does stay in Cleveland.

:We know that this has been his M.O. for the last several years. Even when he went back to Cleveland from Miami, it was on a short-term deal. He wants to keep to his options open for various reasons – to keep Dan Gilbert on edge, to keep [the front office] trying to make the team better and just for other personal reasons. LeBron likes playing in this situation. I think that’s his M.O. and I don’t think we should assume that he’s definitely leaving Cleveland because he won’t commit there long-term."

Many around the league believe it's a "foregone conclusion" that James leaves next offseason, and it's reportedly the "worst kept secret" in the NBA that LeBron plans to join the Los Angeles Lakers. James already owns a home in Los Angeles, which is where he trains in the offseason, and his kids have also been enrolled in school there.

He has also been linked to the New York Knicks and may try to team up with friends Chris Paul, Dwyane Wade and Carmelo Anthony.

Latest on Kristaps Porzingis and the Knicks
Much has been made of New York Knicks big man Kristaps Porzingis skipping his exit meeting with the team following last season, which bothered former team president Phil Jackson so much that he explored trading his star player. Now, we are learning that Porzingis' fractured relationship with head coach Jeff Hornacek is what led to his decision to miss the exit meeting.

According to longtime NBA reporter Peter Vecsey, Porzingis was angry because Hornacek told Knicks center Willy Hernangomez, one of Porzingis’ good friends, to tell Porzingis to “stop playing like a pu**y.”

Porzingis, who is now back on speaking terms with Hornacek, has also expressed his displeasure about the dysfunction and drama within the franchise.