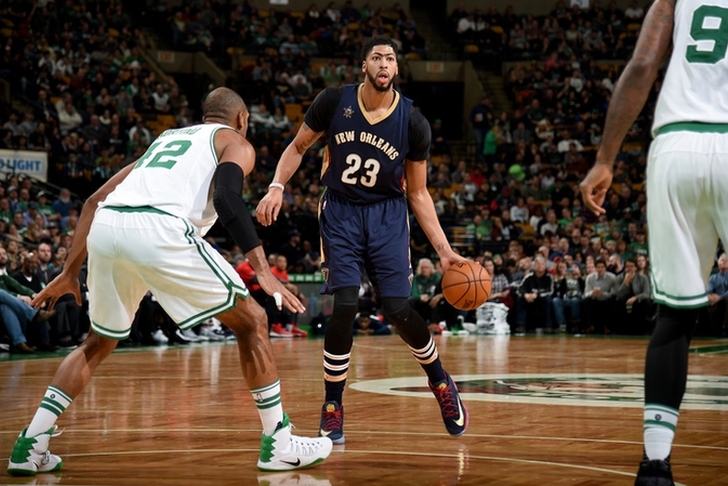 The NBA landscape changed following the blockbuster trade that sent Kyrie Irving to the Boston Celtics, but the completion of that trade is now in question due to concerns about the health of Isaiah Thomas' hip. As such, the Cleveland Cavaliers are asking the Celtics for additional compensation in order to complete the deal. We have the latest on that ongoing saga, as well as an update on Anthony Davis' future with the New Orleans Pelicans, in today's NBA Rumors Roundup:

Celtics "draw line in sand" with Cavs
Cleveland began looking for more compensation from Boston following Thomas' physical with the Cavs on Friday, where they discovered that his injury was more severe than they thought. They have told the Celtics that they want either second-year forward Jaylen Brown or rookie Jayson Tatum added into the deal - along with original package of Thomas, Jae Crowder, Ante Zizie and Brooklyn's unprotected 2018 first-round pick - but that's not flying with Boston.

The Celtics have reportedly drawn a line in the sand on the deal as they believe they were up front with Cleveland about Thomas' injury. As such, they are only willing to part with an additional second-round pick.

Per @ChrisMannixYS on @CSNNE, #Celtics will draw line in sand. May part with a 2nd Rd pick to complete #Cavs deal. No firsts/Brown/Tatum.

Boston was intent on keeping both Brown and Tatum in any trade this offseason, passing on possible deals for Jimmy Butler and Paul George because of it.

Cleveland has until Thursday to decide if they will still accept the trade or veto it.

Boston's next plan is to add Anthony Davis
The Celtics have already been linked to Pelicans star Anthony Davis, and while New Orleans has said they are not shopping him, Boston is hoping they can lure him away - and believe adding Kyrie Irving has helped their chances of doing so.

The Pelicans essentially have a "playoffs or bust" mentality going into the season after trading for DeMarcus Cousins at the deadline last year and, with Cousins set to become an unrestricted free agent in 2018, the future of the franchise is largely uncertain. Ben Golliver of Sports Illustrated explains how all of that uncertainty could lead to Davis trying to force a trade to Boston.

They could be almost unrecognizable to the point where if you’re Davis that could be the last straw in terms of wanting to be there. I could easily see a situation next summer where Davis says the exact same thing to New Orleans that Kyrie said to Cleveland this summer. And he would actually be about 10 times more justified in saying it than Kyrie was this summer given how much craziness has been around him throughout his entire career down there. And how lacking in commitment that organization seems to be towards winning. To me, I think that’s Boston’s long-term master plan, and if you’re trying to position yourself for an Anthony Davis trade—or signing—I really think bringing in a guy like Kyrie Irving definitely helps you if you’re Boston. I think he’s got that credibility among his fellow players...and I think he’s going to kind of end up being a recruiting magnet for that team.

Boston still has a large quantity of desire draft picks and young players that could help New Orleans if they decide to undergo another rebuild after the season, making them Davis' most likely destination should he ask to be traded.

However, Davis - who is under contract through the 2019-20 season - has previously said that he is "never leaving" the Pelicans and has never given any indication that he wants to leave. The 24-year-old averaged 28.0 points, 11.8 rebounds and 2.2 blocks per game last season.

Enes Kanter expected to pick up player option for 2018-19 season
Oklahoma City Thunder forward Enes Kanter is entering the final guaranteed season on the four-year deal worth over $70 million he signed with the team following the 2014-15 season, but plans to pick up his player option that will keep him in OKC through 2018-19, according to Fred Katz of the Norman Transcript.

A source with knowledge of the situation told me "I'd be shocked" if Kanter doesn't pick up his player option next year. It's worth > $18M.