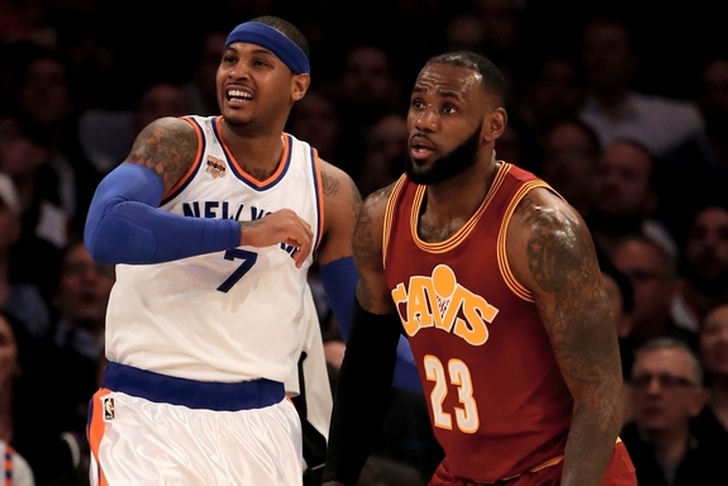 The start of NBA training camps are just over a month away and excitement for the new season is building following the release of the schedule on last week. LeBron James' future plans continue to be at the forefront of headlines, but there are also updates on where Carmelo Anthony may be playing next season and more. Here are all the latest NBA rumors you need to know:

Could LeBron James end up on the Knicks?
There continue to be plenty of questions about LeBron James' plans for free agency next summer given his reluctance to sign an extension with the Cleveland Cavaliers, with him being linked to both the Los Angeles Lakers and Houston Rockets.

"I could see [LeBron] going to New York before L.A. I still think, when you go to the Garden, it's a completely different feeling," Griffin said on the View From The Cheap Seats podcast. "The energy, there seems like there's just a consistent buzz the entire game. … Even last year when you go play them, it's still there.

"Honestly, I don't see him coming to L.A. period. Listen, again, I have no idea [laughs]. I think something is brewing with him and his group of guys. I don't know what's going to happen, but I think something's brewing and they're going to try to make that work."

The group of guys Griffin is referring to is Chris Paul, Dwyane Wade and Carmelo Anthony, all of whom are very good friends. That "Banana Boat Crew" has talked about playing together on several occasions, leading to speculation that it could happen in 2018.

For his part, LeBron is staying mum on the subject.

All four players are scheduled to be unrestricted free agents this offseason (LeBron and Carmelo would have to opt out), meaning they could choose to join a team that has enough cap space.

Latest on Carmelo Anthony
As for Anthony, he doesn't appear to want to stay in New York no matter what, telling the Knicks that he doesn't want to play for them next season as he tries to force his way to the Rockets. While the Knicks have told Anthony they won't trade him to Houston because they don't like what the Rockets can offer in return and are "unwilling to make a bad trade" involving him, Anthony is still holding out hope he can end up in Houston this year, according to Fred Kerber of the New York Post.

Sources maintain there has been little, if any, movement on the Anthony trade front. He wants Houston. He would waive his no-trade clause to go there – along with a 15 percent trade kicker that would cost him roughly $8 million to go to the Rockets. Cleveland is not nearly as attractive without Irving and with LeBron James’ future there in question. Other teams, including Portland and Oklahoma City, have interest in Anthony, but the attraction has been one-way so far.

Anthony's attraction to Houston came after the Rockets traded for Paul and is very intrigued the idea of playing with him and James Harden. If Houston is able to add Anthony to their current group, it makes them a more likely destination for both LeBron and Wade next summer as well.

The Chicago Bulls are expected to buy out Wade's contract at some point this season, meaning Houston could realistically sign him this season.

The Cavs, Oklahoma City Thunder and Portland Trail Blazers are also trying to trade for Anthony.

O.J. Mayo hoping he can return to the Bucks
Former Milwaukee Bucks guard O.J. Mayo was banned from the NBA in 2016 after a third positive drug test for marijuana and can not apply for reinstatement until the summer of 2018. If he is allowed back into the league, Mayo told Scooby Axson of The Crossover that he wants to rejoin the Bucks in order to make up his mistakes.

"I want to go back to what I left [in Milwaukee],” Mayo said. “I was real close with Jason Kidd. That was the best relationship I had with a coach besides [Barnes]. I had great relationships with Giannis [Antetokounmpo] and Khris Middleton. I was comfortable there. I felt like I let them down, cheated them for two years. They paid me $8 million to be, in my eyes, a subpar player. They invested millions of dollars for me to be on top of my s---, and when you’re not on top of your s---, it shows. If they just give me the chance, I can make it up. I owe them.

“I knew better. I knew guys in my neighborhood who should have made it somewhere but got stuck. I wasn’t raised like that. Every man writes his manner. I just made poor decisions.”