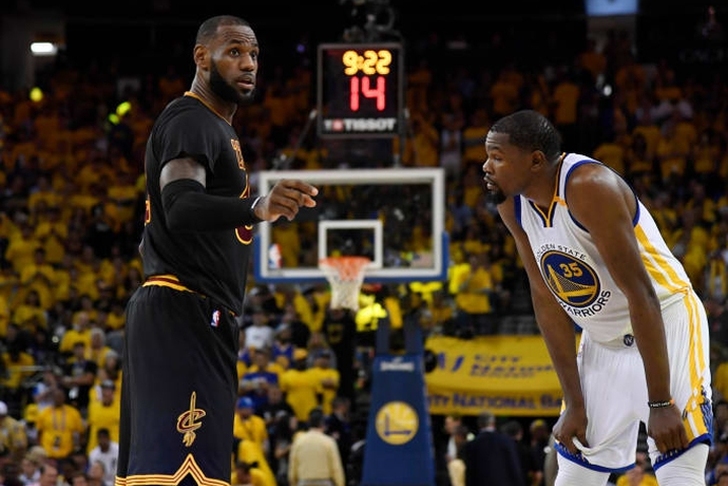 The fallout from the Kyrie Irving trade continues to dominate the NBA with new information about why he wanted a trade in the first place. The Cleveland Cavaliers are trying to move forward without him, but appear ready to start a rebuild soon with LeBron James refusing to commit to the franchise long-term. We have an update on his future plans, as well as the Washington Wizards' plans for Marcin Gortat. Here are the latest NBA rumors you need to know:

"Foregone conclusion" that LeBron James leaves Cavs next offseason
Cleveland is hoping that the return they got from the Boston Celtics will be enough to convince LeBron to make a commitment to the franchise, but other teams around the league don't see that happening. Bleacher Report talked to three NBA executives and they all think James is leaving in free agency next offseason.

"I don't see him staying in Cleveland," another thinks.

Cleveland is "no longer investing" hope that James re-signs with Cavs, which is why they made sure the return they got from the Celtics will help set them up for a possible future without him.

It's reportedly the "worst kept secret" in the NBA that LeBron plans to join the Los Angeles Lakers in 2018. James already owns a home in Los Angeles, which is where he trains in the offseason, and his kids have also been enrolled in school there. He has also been linked to the New York Knicks and may try to team up with friends Chris Paul, Dwyane Wade and Carmelo Anthony.

That "Banana Boat Crew" has talked about playing together on several occasions, leading to speculation that it could happen in 2018. All four players are scheduled to be unrestricted free agents this offseason (LeBron and Carmelo would have to opt out), meaning they could choose to join a team that has enough cap space.

LeBron averaged 26.4 points, 8.7 assists and 8.6 rebounds per game this past season,

Kevin Durant knows why Kyrie Irving wanted trade from Cavs
Irving requested a trade because he wanted to be "the guy" and felt the need to get out of LeBron's shadow. There were also rumblings of discord between the two stars, and while that may or may not be the case, Golden State Warriors forward Kevin Durant said that James was the biggest reason why Kyrie wanted out of Cleveland.

"When you’re around LeBron James, there’s so much that comes with that," Durant told Bill Simmons on his podcast. "Outside distractions and conversations and just noise that just comes around just from being around LeBron James. And Kyrie was at the point, like, 'All right, we lost the championship, this whole season’s gonna be about if LeBron’s gonna leave or not. I’m ready for a new challenge.' All that stuff kind of met at the pinnacle of why he wanted to leave, and it just felt like he wanted a situation where he would just be free from all of that and just play."

Marcin Gortat ready for trade but wants to stay with Wizards
Washington Wizards center Marcin Gortat told the team that he would be open to a trade during his exit interview at the end of the season, but that doesn't mean he wants to be traded. In fact, quite the opposite. Gortat explained the situation on the Wizards Tipoff podcast:

"First of all, I knew it right away that I would be coming back. I still have a contract and at the end of the day, I’m a Wizards player. I still have two fully guaranteed years. When I went for the exit interview, I was just preparing myself for the worst. You’ve gotta be ready in this business. That doesn’t mean I wanted to be traded. It doesn’t mean that I’m leaving or that I don’t want to play for the Washington Wizards.

"But listen, at the end of the day, if the team is winning then I’m fine with that. It’s all about winning and taking a step forward, going to the playoffs and hopefully reaching the conference finals and hopefully one day the NBA Finals. But it was just a tough situation for me certain weeks and certain months. In the playoffs, I had games where I was able to perform at the highest level and then the next game I was completely out of the game. So, it was tough. But like I said before, just because I said that in the exit interview stuff like that, doesn’t mean I don’t want to be on the team. I was just preparing myself that I might be traded. At the end of the day, I know I’m not the youngest one."

Gortat has spent the last four years with the Wizards, starting all but one game he has appeared in during that time. The 33-year-old averaged 10.8 points and 10.4 rebounds per game last season.