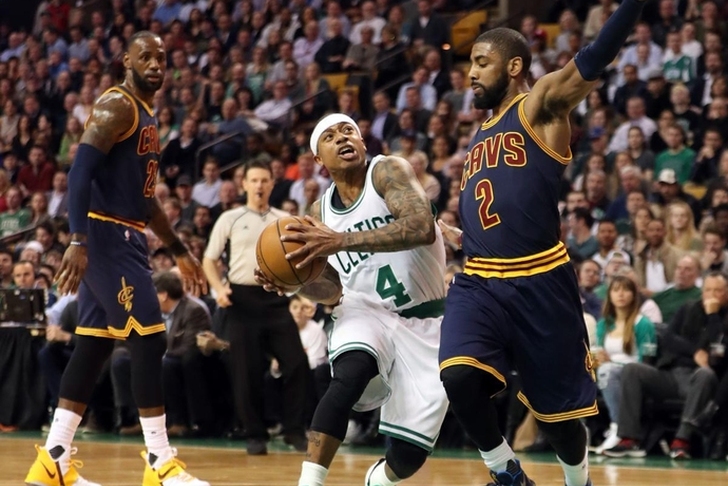 Kyrie Irving has a new home. The Cleveland Cavaliers granted their point guard's request for a trade, dealing him to the Boston Celtics. It's a true blockbuster, with the Cavs getting several pieces back from biggest threat in the Eastern Conference.

It's rare for a team to trade with one of their biggest threats for a championship, but that's what happened here. The Celtics were already the top threat to the Cavaliers in the East and the addition of Irving only makes them better. Of course, they did have to give up several pieces to land the 25-year-old guard.

Isaiah Thomas, the Celtics starting point guard, is the headliner of the trade. Although he's set to be a free agent after this year, Thomas makes just over $6 million this year. He finished fifth in MVP voting last year, after putting up a career-high 28.9 points per game with 5.9 assists per game.

Jae Crowder also heads to the Cavs, to help balance out the salaries. Crowder gives the Cavs another wing option. A solid defender, Crowder put up 13.9 points and 5.8 rebounds per game. With players like Gordon Hayward, Jaylen Brown and Jayson Tatum, the Celtics have plenty of wings.

The Cavs also get Ante Zizic, the 23rd overall pick of the 2016 NBA Draft. The Cavs reportedly wanted some younger pieces in a trade, and the 20-year-old, 7-foot Croatian fits that bill. Getting the Nets' first round pick for this coming year should allow the Cavs to add another lottery piece.

Kyrie Irving will waive his trade kicker, which means the trade is balanced from a salary cap perspective. It also saves the Cavs $29 million in luxury taxes. Boston, meanwhile, will trot out a starting five of Irving, Jaylen Brown, Gordon Hayward, Marcus Morris and Al Horford. They also keep Marcus Smart, Jayson Tatum and the Lakers' first round pick.