5 Teams That Could Trade For Steelers WR Martavis Bryant 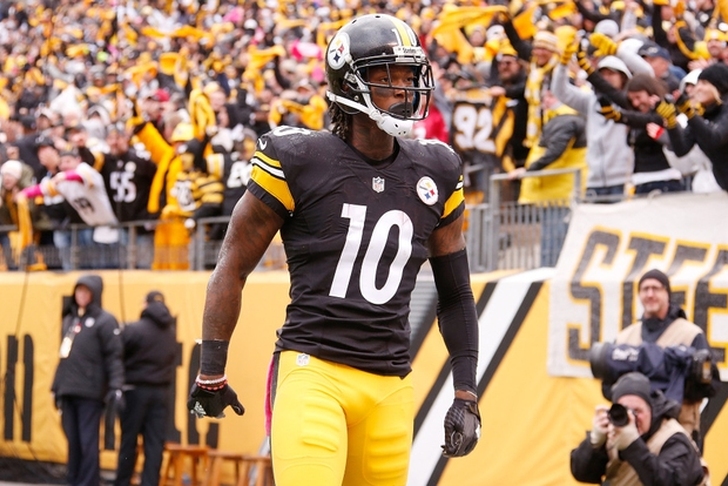 Pittsburgh Steelers wide receiver Martavis Bryant has reportedly requested a trade from the team due to a lack of touches and is looking for a fresh start, and while he has denied that report, teams around the league are undoubtedly calling Pittsburgh about his availability. If the Steelers do trade him, where could he land? Here are the five teams that are the most likely to trade for him:

5) New England Patriots
Couldn't you just picture Bill Belichick sending a first-round pick to Pittsburgh for a deep threat of Bryant's caliber? New England hasn't had a legit deep threat since Randy Moss, and we all know how successful Brady was with him on the roster. Of course, the Steelers would be very hesitant about sending one of the best weapons to the Patriots given the way they've dominated the AFC. Would they want to contribute to the continuation of that?

4) New York Giants
Despite their win over the Broncos on Monday night, New York isn't going anywhere this season. However, they have a huge need at receiver with Odell Beckham Jr. and Brandon Marshall suffering season-ending injuries, and with there being rumors that Marshall will retire, Bryant could be a legitimate, long-term No. 2 option next to OBJ. Pittsburgh's asking price would likely determine New York's interest.

3) Buffalo Bills
The Bills make sense for a number of reasons. First off, they need a wideout after trading Sammy Watkins and Anquan Boldin's retirement. Secondly, they have assets that would appeal to Pittsburgh with multiple draft picks in the first, second and third rounds in the 2018 draft. However, it doesn't seem like Buffalo is willing to part with those and want to rebuild through the draft - though Bryant could make them rethink that.

2) Chicago Bears
Chicago has one of the worst receiving cores in the league and Cameron Meredith suffered a torn ACL in the preseason. They are also rebuilding but need to surround Mitchell Trubisky with weapons if they're going to be successful. With Kevin White proving he can't stay healthy. However, that trade up for Trubisky cost them some picks that could come in handy here.

1) Cleveland Browns
The Browns are easily the most likely option for a Bryant trade. Forever in rebuilding mode, Cleveland has stockpiled assets but have shown they're willing to flip them for talented players they want to sign long-term (i.e. Jamie Collins). With one of the worst receiving cores in the league, Cleveland is actively looking to acquire a wideout via trade. The Browns have the assets, desire and motivation to make something happen, which is why they're the most likely to get a deal done.