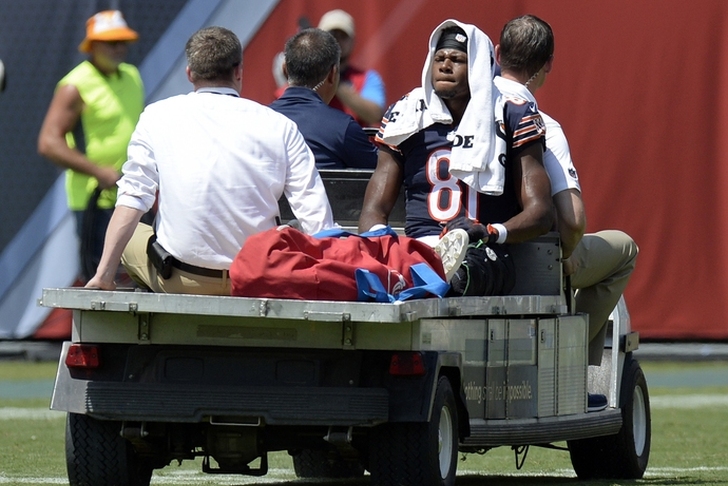 Chicago Bears wideout Cameron Meredith suffered a knee injury early in the first quarter of their preseason game against the Tennessee Titans today, and the team believes he has a torn ACL and possibly other knee damage, according to NFL Network's Ian Rapoport.

#Bears WR Cameron Meredith is believed to have torn his ACL, per Pam Oliver on the Fox broadcast. Likely had additional damage, too. Too bad

Meredith suffered the injury on this play, where he was tackled by two Titans defenders. Be warned, the injury is fairly graphic.

#Bears wideout Cam Meredith (@Cam_I_Am81) suffered a graphic knee injury on this play. He will not return to the game. #CHIvsTEN pic.twitter.com/xmqu4byf30

Meredith was carted off the field after his led was put in an air cast. He is expected to miss the entire season.

The Bears were expecting a breakout season from the Illinois State product in his third season as a starter next to Kevin White. He caught 66 passes for 888 yards and four touchdowns last season.