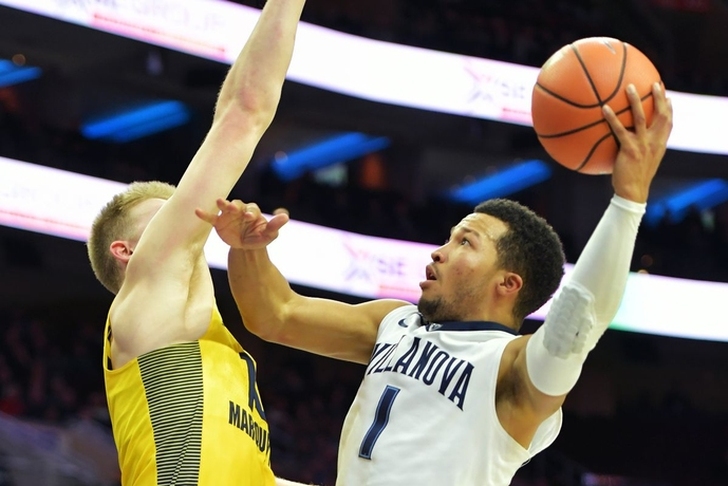 It's official - there is no such thing as stability in college basketball.

Six ranked teams fell to unranked foes over the weekend, including three top-five teams and five top 14-teams. Michigan State was No. 1 in the AP Poll for the first time all season to start the week (they were No. 3 in our poll) and fell flat on their face in Columbus, losing 80-64 to Ohio State.

Duke lost to NC State for the third consecutive year as their defense continues to be a major issue for the Blue Devils while Xavier lost to Providence despite 24 points and 12 rebounds off the bench from big man Kerem Kanter.

Arizona had their nine-game win streak snapped by Colorado on Saturday, capping a week in which the Buffaloes upset both the Wildcats and Arizona State. Things also got worse for Texas A&M, who dropped their third straight game after rising to No. 5 in the AP Poll to LSU thanks to this incredible shot from Tremont Waters.

Of course, there were also five matchups between ranked teams this weekend. Oklahoma, who had risen to No. 1 in my rankings last week, found out how tough it is to win in Morgantown in an 89-76 loss to West Virginia despite 29 points and five assists (and eight turnovers) from Trae Young.

Kansas held on for an 88-84 win over TCU on the road to end their slide, while Virginia used their dominant defense to fuel a 61-49 win over North Carolina and Tennessee used a monster second half to beat Kentucky at home (76-65) for the third straight year. Sunday was capped by Miami's 80-74 victory over Florida State.

How will all of those upsets shake up the rankings this week? Here are my latest Top 25 Power Rankings:

This is an ode to Mike Brey and the job he has done with the Irish. We all wrote them off after Bonzie Colson's injury following those losses to Ball State and Indiana, yet all they did was beat NC State by 30 (who then beat Duke) and knocked off Syracuse on the road without Matt Farrell as well. The Irish are doing the most with less right now.

I almost dropped Miami out of these rankings because of their loss to Georgia Tech earlier this week, yet they bounced back with a convincing home win that will keep this talented group in the top 25. Their defense is elite (top eight nationally in adjusted defensive efficiency, effective FG percentage defense, and both opponents three-point percentage and two-point percentage), and if they can figure their offense out, they're a team with tremendous upside.

Offense isn't a problem for Creighton as they rank third in the country in points and assists per game, and that offense propelled them to easy wins over St. John's and Georgetown this week.

The Heels lost to both Florida State and Virginia this week, though both of those games were on the road to AP-ranked teams, so you can only dock them so much. However, I still have major concerns about their perimeter defense, which has been their Achilles heel all season. I detail that weakness here.

A 0-3 start to SEC play is certainly not how Texas A&M expected their conference season to start, especially after going 11-1 in the non-conference. Their offense has struggled and Robert Williams (8.4 ppg, 10.0 rpg, 2.7 bpg), a projected lottery pick, has not progressed seemingly at all. Things won't get any easier for the Aggies this week, either, with road games against Kentucky and Tennessee.

TCU was in the top 10 in these rankings a few short weeks ago before losing two of their last three games. While those losses were close (five combined points) and to good teams (Oklahoma and Kansas), both did come at home. Their defense has been very un-Jamie Dixon-like this season (84th in adjusted defensive efficiency), which has kept them from being a top team.

Simply put, Kentucky isn't anything more than an average team right now. They don't shoot the ball well from the outside and still struggle to defend on the perimeter. Shai Gilgeous-Alexander (11.5 ppg, 4.3 apg) has been their best player over the past few weeks, but head coach John Calipari's squad needs to get more contributions from Kevin Knox (14.0 ppg, 5.5 rpg) and Hamidou Diallo (13.7 ppg, 4.9 rpg).

Bruce Pearl has to be the frontrunner for National Coach of the Year and it's not even close. The Tigers lost arguably their two best players in the preseason in Austin Wiley and Danjel Purifoy due to the FBI scandal, and while it's unclear if they will return this season, Auburn has only lost one game (Temple) with a depleted roster and no size. This week they recorded double-digit wins over both Tennessee and Arkansas.

Gonzaga has been as dominant as expected in West Coast Conference play, winning their first four games by an average of 32.75 points per game.

Cincinnati's offense is still a major work in progress, but as we've come to expect, the Bearcats are one of the country's elite defensive teams with the nation, ranking second in adjusted defensive efficiency. Thanks to the AAC schedule, they'll really on be tested twice (UCF - Jan. 16, Houston - Jan. 31) for the rest of the month. Cincy won't square off with Wichita State until Feb. 18.

Keep an eye out for the Tigers, who solidified their lofty record with a home win over Louisville on Saturday. Defense has been their calling card, giving up 70 points or less in each of their last nine games. Their only loss qualifies as a good loss (Temple, No. 37 RPI) and they have three quality wins over Ohio State, Florida, and the Cardinals.

Kansas seemed to snap out of their snide with a good win on the road over a quality TCU squad, though they almost gave away a sizable lead in the second half. I'm still looking to see more consistent guard play out of them, and I explain why here.

The Pirates got monster nights from Angel Delgado (28 points, 15 rebounds, six assists) and Khadeem Carrington as they rallied from 11 points down on the road for a 90-87 win over Butler on Saturday. However, just 14 of those points came from players other than their Big 3 (Delgado, Carrington, Desi Rodriguez), which is a problem this team has - they can be too reliant on their stars.

ASU ended their two-game skid to start Pac-12 play with a two-point win over Utah on the road on Sunday. For as good as they are offensive, this three-game road trip really exposed their defensive flaws (109th in adjusted defensive efficiency) and reliance on the perimeter jumper.

The Wildcats are above the Sun Devils since they just beat them even though their loss to Colorado on Saturday was the first time they had suffered a defeat since the Battle 4 Atlantis. Head coach Sean Miller ripped his team for not playing hard and them not listening to him (shocking coming from Sean Miller, I know), but the bigger problem was that leading scorer Allonzo Trier was limited to just eight points in the loss.

Xavier's 10-game win streak came to a screeching halt on Saturday in a narrow loss to a game Providence team that was playing motivated basketball. Still, it was just their second loss of the season and both came against quality opponents. I'm not worried.

Do not take this Texas Tech team lightly just because they're Texas Tech. They have a stingy defense that ranks in the top 10 in virtually every major category, a solid 10-man rotation led by Keenan Evans (17.2 ppg, 3.6 apg), and a resume that includes two wins over top 20 RPI opponents. Plus, their only loss came to Seton Hall, who is ranked No. 4 in the RPI. These guys are legit.

Speaking of legit defensive teams, I told you guys Virginia was going to be really good this year! UVA has ridden the nation's best defense to several big-time wins, including Saturday's beatdown of UNC. As long as Kyle Guy (14.9 ppg), Devon Hall (11.9 ppg, 4.0 rpg, 3.1 apg), and Ty Jerome (9.8 ppg, 2.9 rpg) continue to play well offensively, this team will be in the top 10/15 for the rest of the season.

Duke is the exact opposite of Virginia right now. Led by freshman star Marvin Bagley III (22.5 ppg, 11.5 rpg), they have the nation's best offense but a defense that couldn't stop a nosebleed. That terrible defense has allowed at least 89 points in each of their first ACC games, and unsurprisingly, they're 1-2 in conference because of it. The Blue Devils won't be a legit contender until they fix their problems on that end of the court.

Another week, another set of dominant wins for the Boilermakers over lesser Big Ten teams in Rutgers and Nebraska. Right now, they're one of just two teams in the country (Michigan State) that rank in the top 10 in both adjusted offensive and defensive efficiency, according to KenPom.com.

Speaking of Michigan State, their shocking blowout loss to the Buckeyes was just that - shocking. It snapped a 14-game win streak and knocked them out of first place in the Big Ten (though it's still obviously extremely early). They'll be fine - they're too good on both sides of the ball not to be - but I'd like to see them get another quality win (North Carolina and Notre Dame are good wins, but not great wins). Thanks to the terrible Big Ten, they won't get that chance until Feb. 10 against Purdue.

Wichita State is the team that benefits the most from everyone losing at the top of the polls. Their well-balanced attack led to blowout wins over a good Houston team and South Florida, putting them at 3-0 in AAC play. An upcoming stretch against SMU, Houston, and UCF starting on Jan. 17 will be a good test for the Shockers.

You can hate on Oklahoma and Trae Young and call them overrated all you want after their loss to West Virginia, but you're simply wrong. Winning on the road is the hardest thing to do in college basketball, and with true road wins over Wichita and TCU already, the Sooners get a bit of a pass. However, Young's turnovers (eight vs. WVU) will be something to watch if another team can frustrate him like the Mountaineers did (though that's an extremely tough task).

The Mountaineers surge up these rankings for a number of reasons:

1) They knocked off our previous No. 1 team in convincing fashion and have another win over Virginia.
2) They're on a 14-game win streak.
3) Their defense is elite.
4) Esa Ahmad, perhaps WVU's best offensive player, still isn't back and won't be for another week or so.

West Virginia is for real, folks.

When the going gets tough, put the only team you can rely on at the top - and that's Villanova. We saw that they are susceptible to the upset bug when they lost to Butler at Hinkle Fieldhouse, but in their defense, that's a place they've traditionally struggled. The Wildcats responded with a 10-point win over Marquette on Saturday. They're making shots, leading the country in effective field goal percentage, and they aren't turning the ball over (sixth in turnover rate). Those two things are a recipe for success.