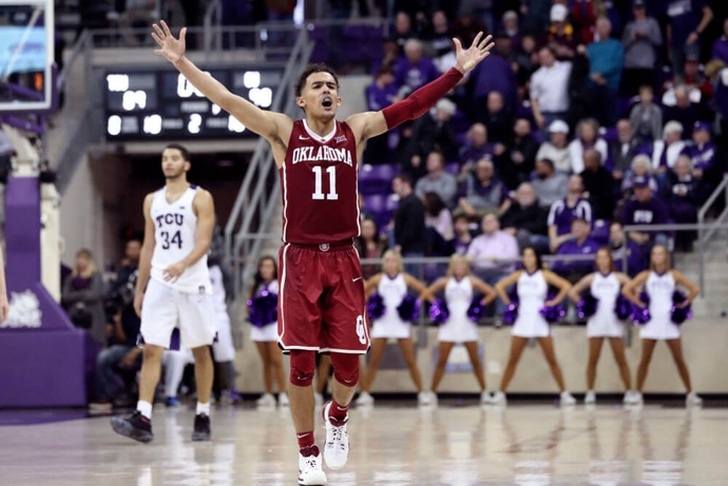 Happy 2018! College basketball certainly left 2017 with a bang this weekend as the three remaining unbeatens - Villanova, Arizona State, TCU - all lost on Saturday while Oklahoma's Trae Young continues to run away in the National Player of the Year race with a 39-point, 14-assist performance in the Sooners' comeback win over the Horned Frogs.

Of course, the other top teams in the country all faced unexpectedly tough tests as well. A shorthanded Texas A&M team was blasted by 22 points on the road against Alabama while Duke, Xavier, West Virginia, Virginia, North Carolina, and Kansas all got victories over unranked opponents by seven points or less.

There were also a number of statement wins, headlined by Texas Tech's 77-53 throttling of Baylor and Kentucky's 90-61 drubbing of Louisville.

How will all of that craziness shake up the rankings this week? Here are my latest Top 25 Power Rankings:

The Vols nearly upset a very good Arkansas team on the road this weekend before losing by two in overtime. They don't have any marquee wins (yet), but Tennessee's three losses have all been by single digits to teams ranked in the top 20 in these rankings.

Cincy has bounced back from back-to-back losses to Xavier and Florida with a five-game win streak, including a victory over UCLA. Sunday's 82-48 drubbing of Memphis got conference play started on the right foot for them.

Clemson fans are focused on bigger and better things on the football field right now, but the Tigers are having their best season under head coach Brad Brownell - who entered the season on the hot seat. They're on an eight-game win streak with wins over Ohio State and Florida, solidifying their 12-1 record as legitimate.

The Zags have bounced back from their surprising loss to San Diego State with blowout wins over Pacific and Santa Clara. They won't be tested until Jan. 18 against Saint Mary's.

Alabama got the marquee win they needed with a 22-point win over Texas A&M. The Tide finally played with consistent effort and energy on both ends of the floor and Collin Sexton didn't have to do everything. If this is how they'll play from now on...watch out.

Arkansas extended their win streak to six games with a comeback overtime victory over Tennessee at home. Add that to their win over Oklahoma earlier this season and you have a team that's building a very impressive resume.

The Pirates picked up an important comeback win over Creighton this week to start conference play, yet only beat St. John's - who was playing without their two best players in Shamorie Ponds and Marcus LoVett - by five at home. The foursome of Desi Rodriguez (18.6 ppg, 5.5 rpg), Myles Powell (14.7 ppg), Khadeem Carrington (14.1 ppg, 3.7 apg), and Angel Delgado (13.7 ppg, 11.5 rpg) are carrying them right now.

Virginia's one-point win over Boston College could be alarming given that their offense was held below 60 points for just the second time this season and one player (Ty Jerome) accounted for over half their points (31). Then again, maybe BC is good since they beat Duke and backed it up with this performance? We won't know how this win will look for a while, but getting a win was the biggest thing.

The Canes rebounded from last week's loss to New Mexico State with a blowout win over a bad Pitt team. With a resume lacking quality wins, they'll have a chance to prove their worth again next Saturday when they host Florida State.

UNC looked sloppy for the second straight time at home in a 73-69 win over Wake Forest thanks to a late floater from Joel Berry. The Heels will figure it out, but a lack of bench production is a major red flag.

RELATED: Rauf Report: Kevin Ollie's Job Status, What To Make Of Kentucky & More Takeaways From The Week Of College Basketball

The Red Raiders made a MAJOR statement on Friday with that blowout win over Baylor, solidifying them as a major player on the national stage. They're one of the best defenses in the country, ranking in the top five in both adjusted defensive efficiency and effective field goal percentage against, and have a balanced offensive attack led by Keenan Evans (16.6 ppg, 3.6 apg). They'll face their biggest test of the season on Tuesday at Kansas.

KU has found their rhythm since that near-loss to Nebraska and seems to have found an identity, going 17/32 from three-point range in their 92-86 win over Texas in the Big 12 opener on Friday. This week (vs. Texas Tech, at TCU) will tell us if the Jayhawks are really back or not.

Kentucky following up their romping of Louisville with a narrow 66-61 home win over Georgia to start SEC play. They're inconsistent on both sides of the ball (which comes with youth) and don't always share on the offensive end, but at least we've seen flashes of what the Wildcats can be this week. Shai Gilgeous-Alexander (11.6 ppg, 4.2 apg) also appears to have stepped up and given them a needed leader.

A&M was shorthanded in their loss to Alabama without leading scorer D.J. Hogg (suspension) and Admon Gilder (knee), but they shot just 30 percent from the field in that 79-57 loss to the Tide. Missing two starters was obviously key in that, which is why they don't drop as far.

TCU blew a double-digit lead late in the loss to the Sooners in a defeat that will stick with Jamie Dixon's squad for a while. Now comes a tough three-game stretch against Baylor, Kansas, and Texas before they have to face Oklahoma again in Norman.

The Mountaineers rallied to beat Oklahoma State on the road on Friday - a pivotal win for a team still waiting for the return of Esa Ahmad, who figures to be one of WVU's leading scorers when he returns.

The Wildcats still have not lost since the Bahamas and their win over Arizona State shows this team is absolutely trending in the right direction. Deandre Ayton continues to prove his worth as a top-four pick in the upcoming NBA Draft with 23 points and 19 rebounds in the win.

The Boilermakers continued to roll with a blowout win over Lipscomb. They also haven't lost since Atlantis, and since they hold the head-to-head win over the Wildcats, they're just above them.

The Shockers looked sluggish in their first-ever game in the AAC but still managed to beat UConn on the road by 10. This team just continues to grind out tough, gritty wins.

Trevon Bluiett (19..7 ppg, 5.6 rpg) led Xavier to a hard-fought road win over Marquette this week, then they overcame a 16-point deficit to beat lowly DePaul at home. It was a performance reminiscent of their 22-point comeback win over East Tennessee State earlier this year - they just didn't look interested.

Yes, Arizona State suffering their first loss isn't fun, but doing so in a close game on the road against a good Arizona team isn't alarming. They still have some defensive problems (outside the top 100 in adjusted defensive efficiency) that showed up and don't have the size to deal with a big man like Ayton, yet they're still one of the best teams in the country.

Villanova's first loss of the season came in a 101-93 defeat at Butler despite 31 points from Jalen Brunson. There is some cause for concern - the Bulldogs shot 60 percent from the field, including 68.2 percent from the three-point line, and made 15 shots from long range - but those numbers are huge outliers from the 65.8 points and 6.6 threes per game the Wildcats were giving up before this game. Butler also just seems to have Villanova's number as three of their last five losses have been to the Bulldogs.

Michigan State hasn't lost since the Champion's Classic (though they haven't played anyone of note since the ACC/Big Ten Challenge against Notre Dame, who stinks) and continued their streak with a 108-52 win over Savannah State before getting back into conference play this week.

Duke was number two last week, yet I can't put them at No. 1 despite Villanova losing because of the way they're playing. Yes, they beat Florida State, 100-93, but their defense struggled mightily again and needed another monster performance from Marvin Bagley III (32 points, 21 rebounds) to win.

I honestly don't feel comfortable doing this. I really don't. But Oklahoma has the resume to warrant this position.

More and more people are starting to believe in this Sooners squad after they beat a really good TCU team on the road. They now have true road wins over both the Horned Frogs and Wichita State and have the best player in the country in Trae Young. As long as his supporting cast continues to play at this level, Oklahoma can beat anyone.