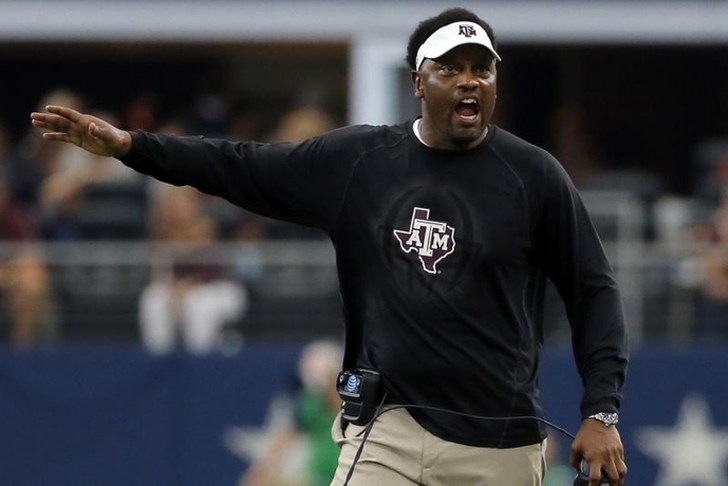 The college football coaching carousel is already in full swing with Arkansas firing Bret Bielema and Nebraska firing Mike Riley following their season-ending losses yesterday, while UCLA has already filled their opening by hiring Chip Kelly. Several more coaches are expected to be on the chopping block this weekend as the regular season ends. As such, here are all the latest coaching news & rumors you need to know:

The Aggies have been good but not great under the sixth-year coach, failing to reach double-digit victories in the last five seasons after finishing 11-2 in Sumlin's first season and A&M's first year in the Southeastern Conference in 2012.

Even that season, A&M finished third in the SEC West behind Alabama and LSU, and the Aggies haven't come close to competing for a division title since. Sumlin has two years left on a contract that pays $5 million annually, and the two sides are expected to negotiate a buyout in the range of $10 million.

Sumlin posted an 11-2 record in his first year with the Aggies, but they haven't approached that level again, posting one nine-win season and three eight-win marks since. In total, Sumlin is 51-25 at Texas A&M, but only 25-22 in SEC play.

Scott Frost's reps meet with Florida
UCF head coach Scott Frost is preparing his team for the AAC Championship Game on Saturday, but his reps met with Florida officials about their head coaching vacancy, according to ESPN.

Kelly was one of Florida's top targets along with Frost, and with Kelly now at UCLA, the Gators seem to be turning their full attention to Frost. However, the Gators do have some concerns about Frost and his ability to recruit at the SEC level.

USF head coach Charlie Strong is another backup option the Gators have their eye on.

Frost to Nebraska a "done deal?"
While Florida has interest, that meeting may be a last-ditch attempt by the Gators to land him. The Huskers have also been targeting Frost to be their next head coach, and the move is reportedly a "done deal," according to Bleacher Report's Lars Anderson.

I've heard from a source that I trust that Scott Frost to Nebraska is a done deal.

Frost has led the Knights to a perfect 11-0 regular season record and a top 15 ranking. The former Nebraska quarterback has been the coach most linked to the Huskers head job, and they're reportedly ready to offer him a seven-year, $35 million deal.

"As I said, I'm very, very happy here," Mullen said after Mississippi State's Egg Bowl loss to Ole Miss. "I'm happy with what we've built, I have a great president (Mark Keenum) and great administration. You look at our fanbase and the program we've built, I think it's pretty special. I'm fortunate to be the head coach and (athletic director) John (Cohen) and Dr. Keenum have both told me they want me to continue to be the head coach here—before the game they did, we'll see what they say right now."

That's because the school plans to give him a pay raise and are going "all in" to keep him, according to Sports Illustrated's Bruce Feldman.

Mississippi State knows Dan Mullen is a pretty hot commodity these days and is prepared to “go all in” to try and keep him in Starkville, a source told SI Friday morning. The 45-year-old Mullen is already getting paid $4.5 million, but word is the school is willing to bump him up to around $6 million and also making an even stronger financial commitment to his staff.

Mullen is 69–46 in nine seasons with the Bulldogs, including an 8-4 mark this season.