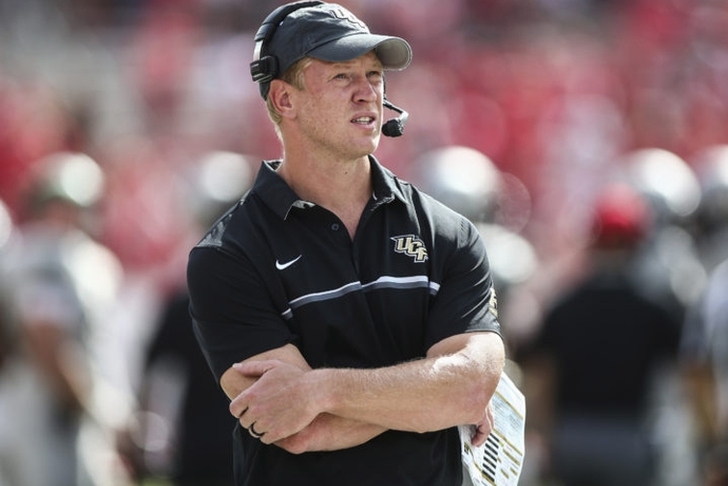 With just one more week until the end of the season, the Florida Gators are really starting to ramp their search for the next head coach. A number of coaches have been linked to the job, namely ESPN analyst Chip Kelly and UCF head coach Scott Frost, but there are plenty of rumors to sort through regarding who they want to replace Jim McElwain. Here's all the latest you need to know:

The Gators want Frost. But Florida is worried about the Heartland native’s ability to build out a staff of SEC recruiters, and the Gators are wary of him bringing his entire UCF staff with him to Gainesville. If Frost were to take the job, Florida would want to include current interim Randy Shannon and perhaps other current Gators on the defensive staff.

The former Nebraska quarterback has also been linked to the Huskers head job once they fire Mike Riley at the end of the season, and they've reportedly already offered him a seven-year, $35 million deal. If Florida already has concerns about Frost's ability, matching such a huge deal would give them more reason to be concerned.

Frost is in his second season with the Knights, posting a 15-7 record in his tenure, including a 10-0 mark and #13 ranking in the AP poll.

Chip Kelly more interested in UCLA than Florida?
Another signal that Florida may be cooling on Frost has been their pursuit of Kelly, which really ramped up last week. However, it appears there may be a snag in their pursuit of him as well, as Kelly is reportedly very interested in the now-available UCLA job, according to 247Sports' Bruin Report Online.

UCLA is my bet to win the Chip Kelly sweepstakes, IF he's really ready to come back to college.

Strong was the defensive coordinator at Florida from 2003-2009 - even serving as the interim head coach in 2004 - before taking head coaching jobs at Louisville, Texas, and now USF.

Despite his lack of success at Texas, Strong has a 62-38 career coaching record and has the Bulls sitting at #22 in the latest AP poll with a 9-1 record. He also has a tremendous history of success recruiting in the state of Florida, which the Gators like. If Frost leaves for Nebraska and Kelly goes to UCLA, Strong appears to be the man Florida has their eyes on as a third option.

Follow our Florida Gators team page for all the latest Florida football rumors!