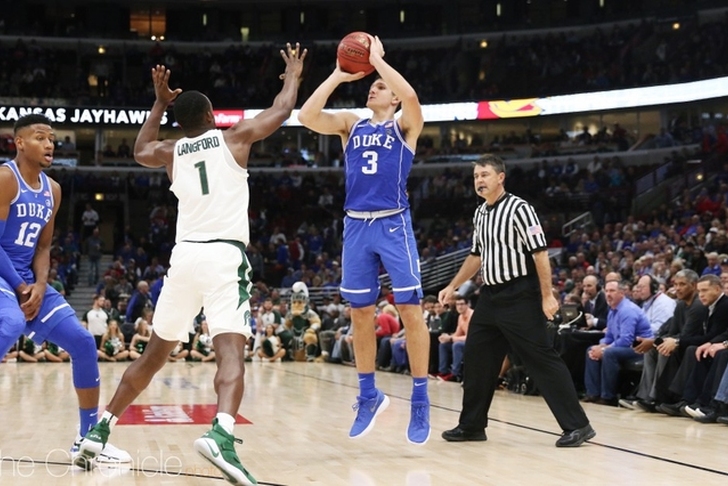 The college basketball season got off to an...underwhelming start just over a week ago with a number of games on Nov. 10 that were good but lacked any real buzz. And there lies a problem - the season just kind of started without anyone really noticing. That buzz came on Tuesday at the Champions Classic, where Duke handled Michigan State and Kansas survived a tougher-than-expected test against Kentucky.

As such, it's good to hear that the new Commission on College Basketball is looking into starting next season with the Champions Classic. That will generate the kind of hype that results from the start of the season feeling like an event rather than just a slate of games.

While that needs to get done, having college basketball back in our lives for the past week and a half has been much better than the seven months we went without it. And now we get Feast Week - the week when we pretend we're totally invested in hanging out with family we haven't seen since Christmas instead of watching the hundreds of games that will be on TV.

Thanksgiving weekend is loaded with top quality tournaments - the PK80, the Maui Invitational, the Battle 4 Atlantis, the Jamaica Classic Montego Bay, the Cayman Islands Classic, etc. - that will provide chances for teams to pick up resume-boosting wins and make major statements that could dictate the course of their season.

Which teams are the best in the country going into the new week? Here are my Top 25 Power Rankings after the first week of the season.

25) Notre Dame Fighting Irish (3-0)
LW: NR
I'm not as high on Notre Dame as pretty much everyone else, but the bad losses of some other top teams allow them to creep into these rankings. Despite not looking impressive against DePaul or in the first half against Mount St. Mary's, they're 3-0 and Bonzie Colson (20.0 ppg, 11.0 rpg) looks like one of the best players in the country. If Temple Gibbs (17.7 ppg) can continue to provide that second scorer for the Irish, I may be wrong about them. We'll find out at the Maui Invitational this week.

24) Saint Mary's Gaels (4-0)
LW: 24
Saint Mary's continues to roll over lesser competition, and while that comes with a territory of being a mid-major, it hurts them in these rankings. Jock Landale has lived up to the hype so far and Calvin Hermanson (20.7 ppg) has given them another major offensive threat. The Gaels look legit.

23) Texas Tech Red Raiders (4-0)
LW: NR
This Red Raiders team is on a mission to make the NCAA Tournament this year after narrowly missing out last year and put on a stellar performance against Northwestern in their first marquee showdown of the season, blowing out the Wildcats 85-49 to win the Hall of Fame Tip-Off Tournament. They're a top 25 team for sure and don't have their next big test until Nov. 30 against Seton Hall.

22) Texas Longhorns (3-0)
LW: 23
Texas is 3-0 with all three wins coming by at least 18 points - and one game was without projected top-five pick Mohamed Bamba. I picked the Longhorns to be a breakout team this year and it looks like they're going to deliver. We'll find out at the PK80 this weekend, where they face Butler in their first game.

21) Virginia Cavaliers (4-0)
LW: NR
I tried to tell you Virginia wasn't going to take a step back this year! Kyle Guy (19.7 ppg) is having his breakout season while UVA continues to play their stingy brand of defense. A true road victory over VCU was a major building block for this group.

20) Alabama Crimson Tide (3-0)
LW: 20
The Tide opened the season with a 12-point win over Memphis without Collin Sexton, Braxton Key, or Riley Norris, showcasing the depth and talent on this team. Sexton (23.5 ppg, 5.0 apg) has since returned and looks like the lottery pick he was billed as, and fellow freshman John Petty (18.3 ppg) has given them a knockdown shooter. A tough week against UT-Arlington, BYU, and Minnesota will be revealing.

19) Louisville Cardinals (2-0)
LW: 14
Louisville hasn't looked like the well-rounded team they have the talent to be with 11- and nine-point wins over George Mason and Omaha, respectively, though that's not a huge surprise given the mess they went through this offseason and first-year head coach Dave Padgett trying to find his way. We'll find out a lot about the Cards on Nov. 28 when they take on Purdue and on Dec. 3 against Seton Hall.

18) Minnesota Golden Gophers
LW: 19
Minnesota already has an impressive road win over Providence on their resume and are averaging a stunning 95 points per game thanks to their 50.2 percent shooting on the season. Jordan Murphy (25.3 ppg, 13.3 rpg) looks poised for a breakout season while Nate Mason (14.3 ppg, 5.7 rpg, 5.0 apg) has continued his steady point guard play.

16) Purdue Boilermakers (4-0)
LW: 18
Purdue keeps rolling along thanks to big man Isaac Haas (13.0 ppg, 6.5 rpg) and their plethora of three-point shooters. With five players averaging double-figures and 10 players firmly in the rotation, the Boilermakers are deep and versatile.

15) Seton Hall Pirates (4-0)
LW: 15
The senior trio of Khadeen Carrington (12.0 ppg, 5.3 apg), Desi Rodriguez (17.0 ppg), and Angel Delgado (12.8 ppg, 8.5 rpg) have Seton Hall looking like a legitimate threat to win the Big East. A blowout win over Indiana was nice, but the Pirates will need to prove their worth in their next four games against Rhode Island, Texas Tech, Louisville, and VCU.

14) Texas A&M Aggies (2-0)
LW: 25
The Aggies have arguably the most impressive win of the young season, beating West Virginia by 23 points in the Armed Forces Classic despite not having projected lottery pick Robert Williams (their best player) and point guard J.J. Caldwell, who many thought they needed to handle WVU's press. Can they repeat that success, or is West Virginia just not as good as we thought they were?

13) Xavier Musketeers (3-0)
LW: 16
Led by stars Trevon Bluiett (25.3 ppg, 7.7 rpg) and J.P. Macura (17.3 ppg, 5.0 rpg, 4.7 apg), Xavier went on the road and beat Wisconsin as part of the Gavitt Games, showing that the Musketeers have picked up right where they left off from last year's Elite 8 run. Beating Baylor and Cincinnati in the coming weeks could propel them into the top 10.

12) Cincinnati Bearcats (3-0)
LW: 12
Speaking of Cincinnati, the Bearcats finally seem to have found some offense, ranking sixth in the country with 102 points per game. Given, they're playing against lesser competition, but they only scored 97 points once last season - and they've done it in all three games this year. Those numbers won't continue and we'll have to wait until the start of December (at Xavier, vs. Florida) until we know if this offense is for real.

11) North Carolina Tar Heels (2-0)
LW: 11
The defending champs have looked shaky at times this year, but that's to be expected when you're breaking in a new style of play and have a star point guard in Joel Berry (8.0 ppg, 6.0 apg) who is coming off a broken hand. Still, they've been among the most efficient teams in the country because they're playing good team ball - two-thirds of their made field goals have come off of assists.

10) Miami Hurricanes (3-0)
LW: 10
Miami hasn't been tested, but five-star freshman Lonnie Walker has looked fine after tearing his meniscus this offseason and they're very deep with eight players averaging at least 7.7 points per game. A road game against Minnesota as part of the ACC/Big Ten at the end of the month will be their first tough game.

9) USC Trojans (3-0)
LW: 9
USC hasn't looked great this season despite being 3-0 and came from down double-digits to beat Vanderbilt in overtime on the road on Sunday. For all the preseason talk about Bennie Boatright, point guard Jordan McLaughlin (19.7 ppg, 5.3 rpg, 4.7 apg, 2.3 spg) has emerged as this team's leader. I have concerns about them going one-on-one and playing inefficient basketball, but they still have the talent to compete with anyone.

8) Kentucky Wildcats (3-1)
LW: 7
The Wildcats have struggled shooting the ball, which well all expected. However, their inconsistency to defend the drive is reason for concern - it's why they only beat Utah Valley and Vermont by 10 and four points at home, respectively. Kevin Knox (15.0 ppg, 7.8 rpg) is finding his place as Kentucky's go-to scorer and that defense appeared to turn a corner in their loss to Kansas. Still, I want to see the Wildcats put it all together.

7) Michigan State Spartans (2-1)
LW: 3
I picked the Spartans to win the national championship in the preseason and while I still think they will do that, it's clear they aren't as improved from last season as we all thought they would be. They still turn the ball over a ton (22.7 percent of their possessions, 292nd in the country), don't force many on the defensive end, and don't shoot a lot of threes. Miles Bridges (19.7 ppg, 7.0 rpg) - who is dealing with a sprained ankle he suffered in their victory over Stony Brook - has been good, but not National Player of the Year good.

Losing to a Duke team without Marvin Bagley in the Champions Classic was a tough blow, and now the PK80 will tell us if that was just a blip on the radar or if there is real cause for concern with this team.

6) Florida Gators (3-0)
LW: 6
The Gators are still largely playing for respect and recognition as one of the elite teams in the country, which they can get with a great performance at the PK80. KeVaughn Allen (10.7 ppg, 4.3 rpg) hasn't lived up to preseason expectations but transfers Egor Koulechov (20.0 ppg, 8.0 rpg) and Jalen Hudson (18.3 ppg) have emerged as top-end players.

5) Villanova Wildcats (3-0)
LW: 8
Villanova does as Villanova does, cruising through their first three games against lesser competition into the Battle 4 Atlantis. They continue to play solid all-around basketball with six players averaging double-figure points and redshirt freshman Omari Spellman (11.7 ppg, 8.7 rpg) has given them a real presence on the inside they've lacked in recent years.

4) Wichita State Shockers (2-0)
LW: 5
Following two blowout wins, Wichita enters the Maui Invitational as the favorite to win the tournament thanks to their balanced rotation. Point guard Landry Shamet (13.5 ppg) is working his back from a foot injury he suffered in the offseason, but Shaq Morris (17.0 ppg, 7.5 rpg) and Darral Willis Jr. (16.5 ppg, 8.5 rpg) have picked up the slack on the inside. Markis McDuffie (last year's leading scorer) won't return from a stress fracture in his foot until December, but their defensive dominance still has them as a top team.

3) Kansas Jayhawks (3-0)
LW: 4
Outside of their terrible shooting performance against Kentucky, the Jayhawks have looked every bit like the team we expected them to be. Svi Mykhailiuk (19.7 ppg) and Lagerald Vick (18.0 ppg, 6.0 rpg) have stepped into major scoring roles with Udoka Azubuike (14.3 ppg, 5.3 rpg) filling the paint inside. If they can get Devonte' Graham (9.7 ppg, 9.3 apg) going offensively, watch out.

2) Arizona Wildcats (3-0)
LW: 2
Sean Miller's Arizona teams haven't been known for their offense, but this group has been lighting it up so far this season. Led by Allonzo Trier (30.0 ppg) and star freshman DeAndre Ayton (18.7 ppg, 11.7 rpg), the Wildcats have the nation's second most efficient offense and are shooting nearly 51 percent from three-point range. We'll find out if they can continue this improvement at the Battle 4 Atlantis.

1) Duke Blue Devils (4-0)
LW: 1
Marvin Bagley (18.0 ppg, 9.3 rpg) has been as good as advertised and Grayson Allen (21.8 ppg) is back to looking like a National Player of the Year Candidate. However, the difference in this year's Duke team is freshman point guard Trevon Duval (12.5 ppg, 8.5 rpg), who is running the offense well and setting up those two stars in great position to score. That win over Michigan State - without Bagley (the projected No. 1 pick in the draft) for most of the game - was really eye-opening and shows how good the Blue Devils are and can be.