Thanks To The Return Of Miles Bridges, Michigan State Is Poised To Win The National Championship 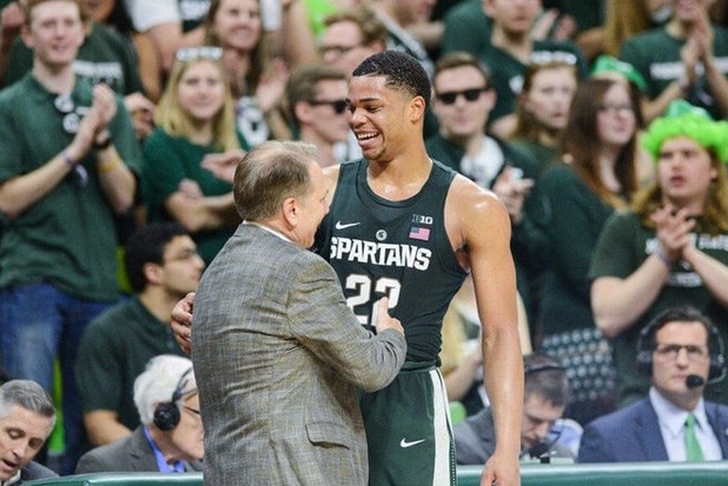 The Michigan State Spartans, ranked No. 2 in the AP preseason poll, are one of a handful of teams that enter the new college basketball season with national championship expectations.

Of course, only one team can finish the season with the trophy in their hands - and Michigan State will be that team.

The foundation for this Spartans team was set all the way back in April. That was when star swingman and projected lottery pick Miles Bridges decided to return to East Lansing for his sophomore season.

That decision came as a shock to a lot of people. After all, he was the first real star "one-and-done guy" to decide that he wanted to spend more than one year in college.

“The decision for him wasn’t that hard,” head coach Tom Izzo said on “The Sidelines” podcast in April. “That’s what was so impressive. I spent three weeks almost trying to talk him into it. Or at least going through the process so we could really find out [just how high he would be drafted].

“It was really bizarre. Most people won’t believe this, but I probably spent more time talking him into going [pro] than out of going, and to his credit, he did what he wanted to do. And he really could have made his decision [to stay] three weeks earlier. But we really held him off so we could do some research and talk to him and his mom, who kind of wanted him to go. But he also has some things he has to work on. He doesn’t want to go there and be in the D-League like a lot of people. The money was important, but not the end all means all. He likes college, he enjoyed what he was doing.”

Since then, fans have been dreaming of a national championship, and rightfully so. The Spartans return 78 percent of their scoring and 81 percent of its rebounding from last season with Bridges in tow, and big men Gavin Schilling and Ben Carter are both back from injury. Add in a freshman class consisting of five-star Jaren Jackson (another projected lottery pick) and four-star Xavier Tillman, and you have a team with no apparent weaknesses.

“They seem to be handling it well, but the heat hasn’t started yet, you know?” Izzo said of the team's expectations at Big Ten Media Day. “(Friday) is Midnight Madness, and all the people will start adoring them, and everybody tells them how good they are. And I gotta pull a Nick Saban and tell them how bad they are.”

Bridges, of course, knows what the expectations are as well. After all, that's a big reason why he returned to school.

“I try not to let it get to me, I’m just trying to focus on winning,” Bridges said at Big Ten Media Day. “One game at a time, starting with Ferris State. I want to count on my teammates to get me going this year. Even when we go through trials and tribulations, I know my teammates are gonna have my back.

“We knew coming into this year that we were gonna have national championship expectations. Either way, if we talked about it or not. We might as well speak it into existence,” Bridges said, adding that it’s tough to avoid using those words. Especially when people ask me about my goals. I mean, of course I want to win a national championship. When they ask me what are my goals for the season, I’m gonna say, ‘National championship.’”

Bridges will get all of the headlines all season long, but a number of other players will have a major impact for this team, starting with sophomore point guard Cassius Winston. He came to Michigan State with Bridges as a four-star recruit in the nation's No. 3 recruiting class in 2016, but struggled as a freshman - as many of the Spartans did.

Winston posted a turnover rate of 26.4 last season, which was among the very worst in the country. However, he's improved by leaps and bounds this offseason.

“I think I made a huge jump in all areas that I needed to, so I think it’s going to be an exciting year for me, and I’m looking forward to it,” Winston said.

For Izzo, that biggest area of improvement has come in his shooting.

The Spartans are also really excited about Jackson, who is a jack-of-all-trades forward. That athleticism and versatility adds yet another dimension to Michigan State's attack and is something they plan to utilize.

"At first when I got here the speed of the game was different, and I just had to adjust to that," Jackson said. "As I'm playing more and more, I'm getting more confident, slowing myself down and making sure I'm getting to my spots on the floor, where I want to be successful.

"If it's spacing the floor for a three when others are penetrating, that's what I'll do. If it's crashing the glass or if it's getting to the basket, that's what I need to do in that situation. I feel like, because of the different things I can do on the court, I'll be able to contribute in significant ways."

The improvement of Winston and arrival of Jackson give Michigan State all of the ingredients of a champion. They have experience. They (should) have reliable guard play. They have versatile wing players. They have depth. They have one of the best coaches in the sport.

And, thanks to the return of Bridges, they have a bonafide superstar. All of that means that they'll be the ones celebrating in San Antonio on April 2.

Michigan State hosts North Florida in their season opener on Friday at 8:00 pm ET on the Big Ten Network before facing No. 1 Duke in the Champions Classic on Tuesday.