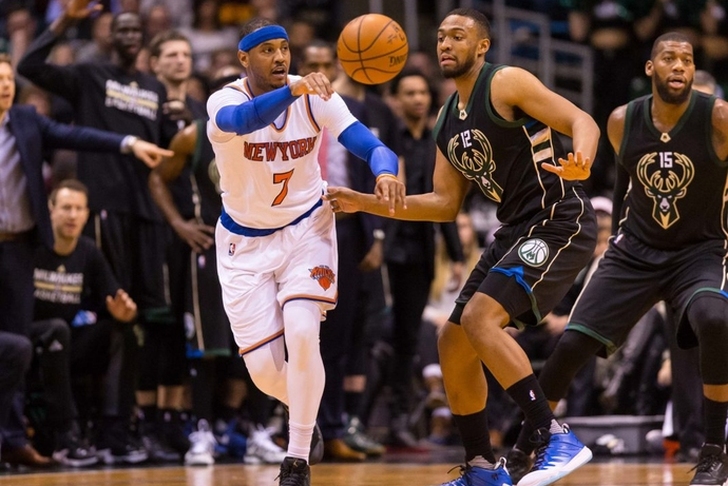 The wild NBA offseason is coming to a close at the end of the month with the start of training camps, but that doesn't mean the trade market has dried up. The Cleveland Cavaliers and New York Knicks continue to be the most active teams exploring their options, particularly when it comes to the future of Carmelo Anthony. Here's everything you need to know in today's NBA Rumors Roundup:

Cavs shopping Nets first-round pick
Cleveland acquired the Brooklyn Nets' first-round pick in the Kyrie Irving trade, which is expected to be a top pick in the loaded 2018 draft class, giving the Cavs the opportunity to draft a franchise player. However, they are exploring trading that pick, according to Joe Vardon of cleveland.com.

As owners of Brooklyn’s No. 1 pick, which could be a top-five pick in next year’s draft, Cleveland has fielded numerous calls already about a potential trade. It could be a part of a major trade package for the Cavs later this year, or, conceivably, the Cavs could make that pick next June.

The Cavs wanted the pick to give themselves the chance to draft a star young player they can build their future around, serving as long-term insurance with LeBron James refusing to commit to the franchise past this season. So why part with the pick?

Rather than drafting a top prospect and waiting for him to develop, Cleveland could flip that pick in a trade to acquire another superstar. That could be used as ammo as they try to convince LeBron to stay - or to keep them among the top teams in the Eastern Conference even if James leaves.

This is something that will be an underlying story with the Cavs all season.

RELATED: 4 trades the Cavs could make to convince LeBron to stay

Bucks are possible third team in Carmelo Anthony trade
As you may have heard, Anthony is trying to force the Knicks to trade him to the Houston Rockets, yet the two sides remain far apart on a possible deal due to New York's unwillingness to take on the three years and $60 million remaining on Ryan Anderson's contract.

They have been searching for a third team that could get involved in talks to take on that contract, and the Milwaukee Bucks emerged as a possibility to be that team, according to ESPN's Ian Begley.

Milwaukee was willing to send former No. 2 overall pick Jabari Parker to the Knicks - fulfilling New York's desire to flip Anthony for a young star - along with either John Henson or Greg Monroe to shed salary. Because of that desire to shrink their payroll, they also did not want to take on Anderson's contract.

Is there still a possibility this deal gets done? Of course. Milwaukee wants to improve their three-point shooting, which Anderson would certainly help as a career 38.1 percent shooter from distance. However, Monroe will be a free agent after the season, and acquiring Anderson would lock the Bucks into a bad contract for two more years after that. Houston would have to include something else to sweeten the pot for Milwaukee to take on Anderson.

Parker, who suffered a torn ACL for the second time in his three-year career last season, posted career-highs with 20.1 points and 6.2 rebounds in 51 games before the injury.

Magic Johnson offers to pay Lakers' tampering fine
The Los Angeles Lakers were fined $500K for violating the league's tampering rules when team president Magic Johnson joked about pursuing Paul George during an interview with Jimmy Kimmel, and Magic wants to atone for that mistake. He said that he wants owner Jeanie Buss to take that money out of his salary since he was the reason for the fine.

"We can't say a lot but we will correct the situation," Johnson said. "It's under my watch. I apologize to Jeanie, and that was the main thing. I told her she could take it out of my salary because I don't want the Lakers to be paying that fine. … I don't want her spending $500,000, because she didn't do anything. That's on me."

Earlier this offseason, George told his former team, the Indiana Pacers, that he would leave them to sign with the Lakers as a free agent in 2018. That prompted Indiana to trade him to the Oklahoma City Thunder, where he is now considering signing an extension.