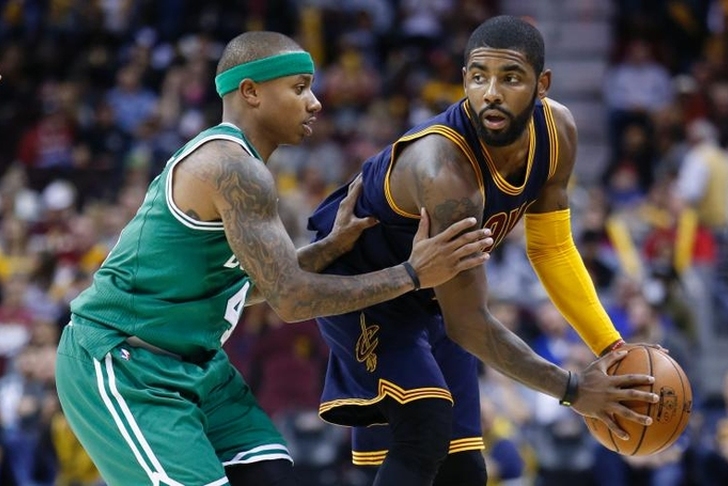 The NBA offseason craziness continued Tuesday thanks to a blockbuster trade that sent Kyrie Irving to the Boston Celtics and both Isaiah Thomas and Jae Crowder to the Cleveland Cavaliers. However, there are now questions about whether or not that trade will be complete because of questions about the health of Isaiah Thomas' hip. Here are the latest NBA rumors on the Irving trade and more:

Kyrie Irving Trade Issues
UPDATE: Adrian Wojnarowski has another major update. The Cavs are going to ask the Celtics for another asset because of the concerns about Isaiah Thomas' health. If the Celtics say no, the Cavs could elect to veto the trade.

Original Post:
The NBA world was thrown into chaos when the Cavs traded PG Kyrie Irving to the Celtics for Isaiah Thomas, Jae Crowder, Ante Zizic and the Nets' 2018 first round pick. But, there's the chance the trade might not end up going through. ESPN's Adrian Wojnarowski has the latest:

"In the aftermath of issues resulting from Isaiah Thomas' physical examination on Friday, the Cleveland Cavaliers and Boston Celtics are planning a telephone call for Saturday to discuss the status of the teams' blockbuster trade, league sources told ESPN," Wojnarowski writes. "The proposed deal sending Cleveland's four-time All-Star guard Kyrie Irving to the Celtics for Thomas, Jae Crowder, Ante Zizic and a 2018 first-round pick via Brooklyn has been thrust into uncertainty with medical questions surrounding Thomas' injured hip, league sources told ESPN. It is possible that Cleveland could request further compensation from Boston before it'll approve the trade, league sources said."

The deadline to monitor is Thursday: that's when Cleveland has to make a decision if they'll veto the trade based on a failed physical. However, the Boston Globe reports attempts to renegotiating the trade would happen before the deal is vetoed. So the blockbuster deal is now in a state of uncertainty.

Nerlens Noel Latest
Noel officially signed his qualifying offer with the Dallas Mavericks today, but that wasn't without controversy. First, came the report that Noel had signed and didn't get a report $17 million offer from the Mavericks.

But Haynes' report was contradicted by fellow ESPNer Adrian Wojnarowski.

Nerlens Noel clearly betting on himself with acceptance of $4.1M QO. He turned down 4-year, $70M Mavs offer made on July 1, sources say.

One thing is clear here: Noel is betting on himself to exceed $17 million per year once he hits the open market next season. In his career, Noel has averaged 10 points and 7.5 rebounds per game. However, the best part of his game is his defense.

It's a two-way contract, which means McAdoo can play in the G-League. It's not a big loss for the Warriors, as he put up just 2.8 points in under nine minutes per game. But he's still just 24 years old, so the Sixers can still try to develop the former North Carolina product.