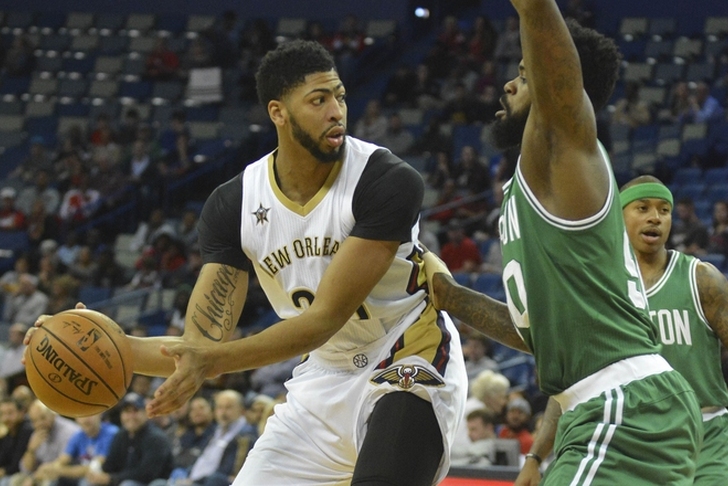 The NBA offseason has reached its quiet point after the free agency frenzy, but Kyrie Irving trade talks and questions about Carmelo Anthony's future with the New York Knicks are keeping the league in the headlines. With training camps not set to start until the end of September, those two storylines - plus potential contract extensions for young stars like Andrew Wiggins and Joel Embiid - figure to stay in the spotlight until they are resolved. Here are all the latest NBA rumors you need to know.

Pelicans not shopping Anthony Davis
The Boston Celtics had expressed interest in trading for Anthony Davis earlier this offseason, but the New Orleans Pelicans assured Davis that he has "nothing to worry about" in terms of being dealt, according to Williams Guillory of The Times-Picayune.

Davis meant it as a joke, but he acknowledged that it was hard to ignore the amount of trade rumors this summer that have speculated about his potential departure from New Orleans.

In particular, the Celtics have been linked with the four-time All-Star as a sensible destination if things ever went bad in New Orleans because of the vast number of trade assets they possess.

Davis said that he spoke with his agent, Thaddeus Foucher, and Pelicans general manager Dell Demps about the rumors earlier in the offseason and he was assured that there was nothing to worry about.

The Pelicans essentially have a "playoffs or bust" mentality going into the season after trading for DeMarcus Cousins at the deadline last year and, with Cousins set to become an unrestricted free agent in 2018, the future of the franchise is largely uncertain.

If the Pelicans struggle, Cousins will be more apt to leave. Should that happen, it's certainly not out of the realm of possibility for New Orleans to explore what they could get for Davis in a rebuild. But, for now, Davis isn't going anywhere.

Pistons prepared to give Avery Bradley lucrative deal
The Celtics traded Avery Bradley to the Detroit Pistons earlier this offseason to clear cap space to sign Gordon Hayward, but also because they knew they were not going to be able to afford to re-sign him as a free agent next summer.

Detroit is aware of the price tag Bradley comes with in 2018, and they plan to shell out a lot of money to keep him, according to Steve Kyler of Basketball Insiders.

The thought process from the Pistons side was if they were going to shell out $90 plus million dollars, it needed to be a better fitting two-way player. The Pistons will get a full season to see if Bradley is the player they believe him to be, but there is a risk for the Pistons, too. Bradley will be an unrestricted free agent and can choose his next team on his own and could leave the Pistons with nothing to show for the trade.

Sources close to the process believe that Detroit traded for Bradley knowing full well it would be very expensive to retain him beyond this season, however, if he is everything they hope he’ll be, they have no issues paying him.

Bradley, one of the league's best perimeter defenders, has been a vital starter for Boston over the past few seasons. He averaged 16.3 points and 6.1 rebounds per game last year.

Pistons the second option for Cavs in Kyrie Irving trade talks?
The Pistons have continued to be active on the trade market and have had talks with the Cleveland Cavaliers about acquiring Kyrie Irving. While the Phoenix Suns are currently at the forefront of negotiations with the Cavs, Detroit will be one of the next teams they turn to if they are unable to reach a deal with Phoenix, according to Sam Amico of Amicohoops.net.

The Cavs and Pistons have held some talks, and I have heard they did involve Jackson, but those didn’t get very far. I actually like your idea, but I doubt the Pistons are willing to part with Drummond or  Johnson just yet. But you never know. Word is, if the Cavs can’t get something done with the Suns, the Pistons will be among the teams they turn to next.

Detroit is one of 20 teams that have reportedly had contact with the Cavs, but it remains to be seen what the Pistons are willing to offer for Irving. Cleveland is asking for a veteran player, a promising young player and a draft pick.

Detroit's offer would likely have to include either Andre Drummond or Reggie Jackson for salary purposes, along with Luke Kennard and/or Stanley Johnson. It's unclear which players Cleveland values.