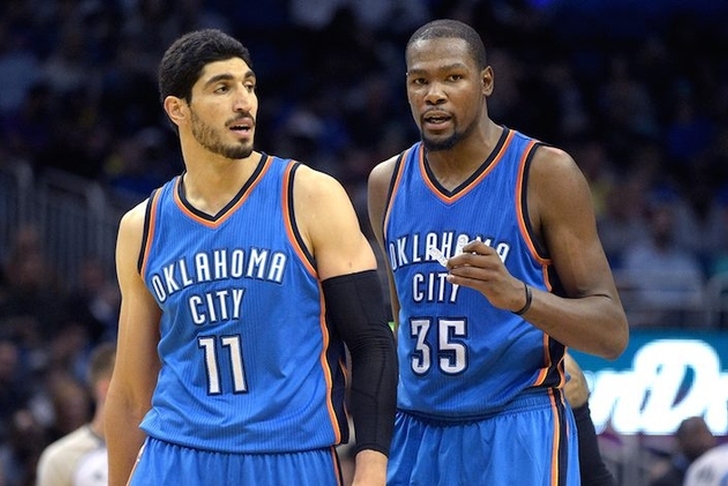 The NBA offseason is coming to a close with training camps opening today for teams participating in preseason NBA Global Games. However, there are a few notable trade rumors floating around as well as questions surrounding the health of a few stars. Here are the latest NBA rumors you need to know:

Davis "never leaving" Pelicans
Anthony Davis has only been able to take the Pelicans to the playoffs once in his four-year career, and New Orleans didn't win a game when they got there. Many blame that lack of success on Davis' lack of a supporting cast, and how that lack of help may cause him to leave the team in free agency when he can. However, Davis says not to worry about that - he doesn't ever plan on leaving the Pelicans.

Davis calls himself old-school and says, "I never plan on leaving here. I love it here. I plan on bringing a championship here."

Kanter takes shot at Durant
The Oklahoma City Thunder started their season with media day yesterday, starting their first season in OKC without Kevin Durant. Russell Westbrook is now this team's only go-to guy, but his teammates don't seem to be worried about him stepping up to take a bigger leadership role - Kanter said he was already the team's leader when Durant was on the team.

Enes Kanter on Westbrook assuming the leadership role on the team: "He was our leader last year, too."

While praising Westbrook, that is also a not-so-subtle shot at Durant, who was viewed as "the guy" in Oklahoma City - but apparently wasn't viewed that way in the locker room.

Bosh not giving up on comeback
Miami Heat forward Chris Bosh's career is in jeopardy after he failed his physical with the team due to blood clotting issues, and it is widely expected that he has played his last game with the Heat. However, Bosh isn't giving up on his comeback, according to ESPN:

Saying "little setbacks happen," Chris Bosh vowed on Friday night to continue his comeback to the NBA without specifically addressing what had caused him to fail a preseason physical with the Miami Heat.

Speaking in a videotaped segment published online, Bosh called the news "a down moment right now" while pledging that everything would work out.

"I had the intention of releasing Episode 2 of 'Uninterrupted: Bosh Rebuilt' today under the assumption I would be cleared to go for camp," Bosh said in the video. "Unfortunately that is not the case. But that doesn't stop me from wanting to share my creative side with you guys and hoping that you want to come along on the journey with me.

"Little setbacks happen. But that doesn't change my intentions and what I want to accomplish," Bosh said. "So I hope you continue to watch. I hope you continue to just take in my journey and just come along with me with the ups and downs. So it's a down moment right now, but everything's going to be all right."

Bosh has had each of this last two seasons cut short due to blood clots, raising major questions about his playing future. However, he told Uninterrupted last week that he believed he was "ready to play" this season. There is currently no timetable for Bosh's return.