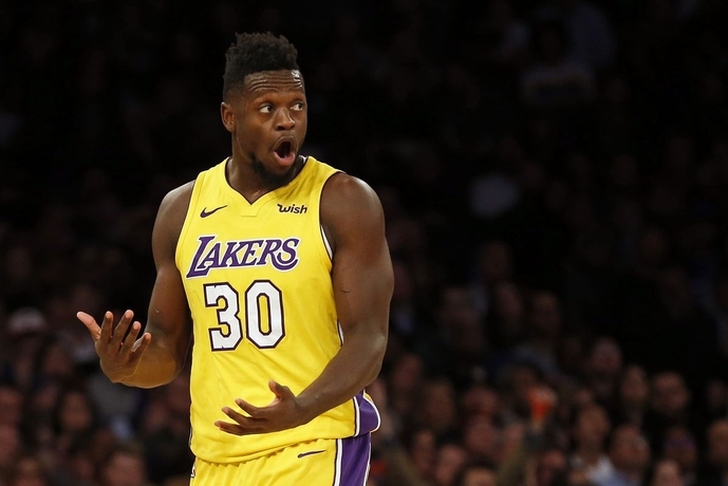 The Los Angeles Lakers were expected to be major sellers at the NBA Trade Deadline, but now that they're recalibrating their plans to focus on the 2019 free agency class instead of the 2018 class, their plans have changed. Here are the latest Lakers trade rumors you need to know ahead of today's 3:00 p.m. ET deadline:

Lakers turning down offers for Julius Randle
Los Angeles has been taking offers for forward Julius Randle since last year's trade deadline, and while he did not appear to be in the team's long-term plans, they have turned down several offers they received for him, according to ESPN's Adrian Wojnarowski.

So far, the Lakers have turned down several teams offering second-round picks for Julius Randle, league sources tell ESPN. No one will offer a first with him headed into restricted free agency.

Randle is averaging 14.2 points and 7.4 rebounds per game this season.

The Lakers have been shopping Jordan Clarkson along with Randle and tried to trade him to the Detroit Pistons for Avery Bradley before Bradley was included in the Blake Griffin trade.

Clarkson, who has also received some interest from the Cleveland Cavaliers, is averaging 14.5 points, 3.3 assists, and 3.0 rebounds per game this season.

Lakers expected to land Marquese Chriss from Suns
As the Lakers go from potential sellers to possible buyers at the deadline, they have emerged as favorites to land Phoenix Suns forward Marquese Chriss, according to Steve Kyler of Basketball Insiders.

For what it’s worth, seems the Phoenix Suns are looking at deals involving Marquese Chriss. Several teams seem to be involved, with the Lakers being considered the Favorites.