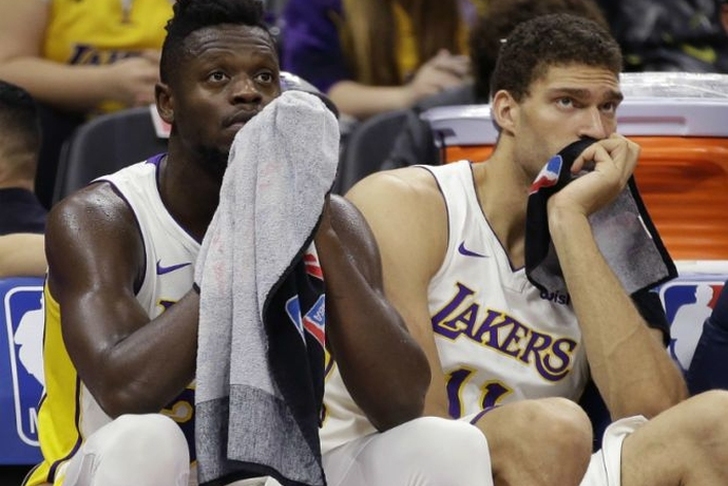 The Los Angeles Lakers have been trying to maximize their cap space to make a run at two superstars in the coming offseason, and in order to do that, they are looking to offload some contracts. As such, they have placed several players on the trade block that may be dealt before Thursday's deadline. Here are the latest Lakers trade rumors you need to know:

Julius Randle not in the Lakers' long-term plans
Los Angeles has been taking offers for forward Julius Randle since last year's trade deadline, and even though they've been discussing the possibility of potentially keeping him given his recent good play, ESPN's Adrian Wojnarowski said on his podcast that Randle is still not in the team's long-term plans.

“Julius Randle, for different reasons, the Lakers are probably not going to invest in him long-term. Does Randle move here at the deadline?”

Randle is averaging 14.0 points and 7.4 rebounds per game this season.

Brook Lopez buyout coming?
The Lakers acquired Brook Lopez from the Brooklyn Nets in the D'Angelo Russell trade because he is in the final year of his contract, but with his role diminishing, there's a chance the Lakers buyout his contract.

"One name from a buyout perspective that is kind of interesting is Brook Lopez," David Griffin said on SiriusXM NBA Radio. "I have to think the Lakers are going to look long and hard at letting Brook go, just because it doesn't behoove them to win more games the rest of the season"

Lopez is averaging 12.0 points and 3.8 rebounds per game this season.

Cavs interested in Jordan Clarkson
The Cleveland Cavaliers are trying to upgrade their backcourt head of the trade deadline, and since the George Hill trade no longer seems likely, they are targeting Los Angeles Lakers guard Jordan Clarkson, according to ESPN's Brian Windhorst and Adrian Wojnarowski.

Los Angeles tried to trade Clarkson to the Detroit Pistons for Avery Bradley before Bradley was included in the Blake Griffin trade.