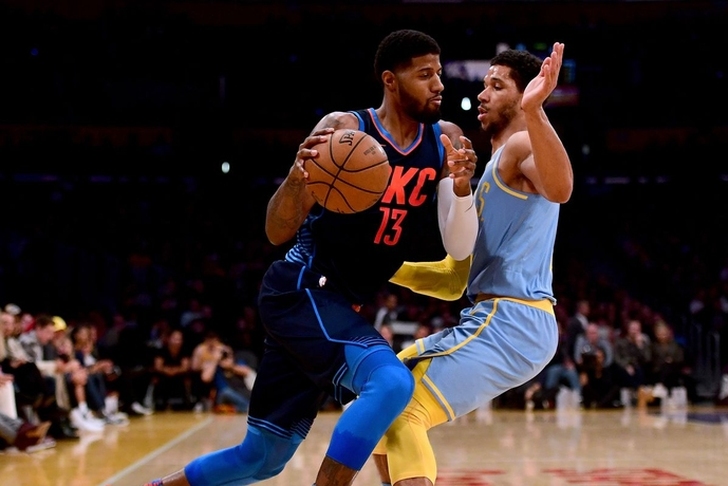 The Los Angeles Lakers have been trying to maximize their cap space to make a run at two superstars in the coming offseason, and in order to do that, they are looking to offload some contracts. As such, they have placed several players on the trade block that are garnering interest from other teams around the league. Here are the latest Lakers trade rumors you need to know:

Gather Lakers offered Jordan Clarkson for Bradley. Don't know if that talk will heat up. https://t.co/xhpTaIOPHQ

Larry Nance Jr. wants to stay with Los Angeles
The Lakers have made a Larry Nance Jr. available prior to the Feb. 8 deadline after refusing to part with him this offseason, but Nance is hoping that he isn't dealt.

“I was a little bit surprised [by the rumors], but at the end of the day, it’s a business," Nance told The HoopsHype Podcast. "If something like that were to happen, if I were to get traded to a different team, it would be a team that would value me. I try to look at it like that, just as an opportunity, if that were to happen. Obviously, I’d love to stay in L.A. But if it happens, there’s nothing that I can do about it, but it would be a new opportunity and hopefully one that I can seize and make the best of.”

Lakers still expected to get Paul George
The Oklahoma City Thunder acquired Paul George in a trade with the Indiana Pacers this offseason after he openly expressed a desire to sign with the Lakers in free agency this offseason, and while he is strongly considering re-signing with OKC, many around the league still expect George to leave the Thunder for the Lakers, according to The Ringer's Kevin O'Connor.

The Lakers are in a tough spot. It won’t be easy for them to dump salary, and even if they do, there are no guarantees that players like LeBron James or Paul George will come to Los Angeles. Though most league executives still expect George to bolt for the Lakers, the All-Star forward recently said his strong relationship with Russell Westbrook this season has made the decision on his future long-term home “easier.” If George stays in Oklahoma City, that’s one less potential sidekick for LeBron in L.A., which is problematic since the other one, DeMarcus Cousins, just ruptured his Achilles tendon.

George is averaging 21.2 points, 5.4 rebounds, and a league-leading 2.2 steals per game this season.