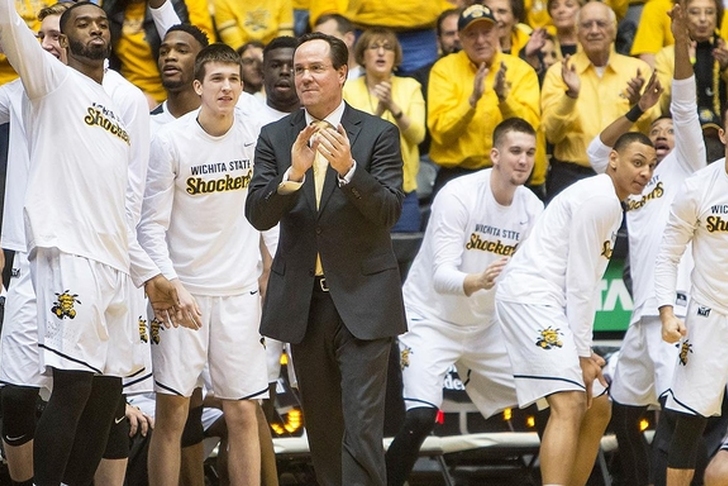 The Wichita State Shockers are no stranger to the national stage in college basketball. After all, they've made the NCAA Tournament six straight times, winning at least 30 games in four of those six seasons and making the Final Four in 2013.

This is something that has been building under head coach Gregg Marshall. He's entering his 11th season in charge of the program, but this one will be different.

The Shockers are making the jump to the American Athletic Conference, which will be a major step up in competition from the Missouri Valley. It's something they've done to bolster the prestige of their program and give them the opportunity to boost their tournament resume.

“When you bring in a school like this, which is as competitive as you are, it elevates everybody,” American Athletic Conference commissioner Mike Aresco said in a press conference at Wichita's Koch Arena in September. “Everybody has to be that much better. I think this will have tremendous value for us and I think we will have tremendous value for you because now you’re going to be going into big cities and you’re going to be playing on CBS and ESPN and ESPN2 on a regular basis.

“Everybody is going to see what this program is on a day-to-day basis, not just once or twice every year.”

The move will certainly help Wichita in the eyes of the selection committee. Last season, the Shockers were so efficient that they were ranked No. 8 in the entire country by KenPom.com. However, they received a No. 10 seed because of the weaker schedule that comes with playing in a conference like the Missouri Valley. Playing in the American and facing teams like Cincinnati, SMU and UConn will significantly boost all of their metrics.

Taking that step up in day-to-day competition would be a struggle for most teams, but not this group. They're so equipped to handle it that they're favored to win the conference in their inaugural season.

Why? They literally have everyone back from their 10-man rotation, including budding stars like Landry Shamet and Markis McDuffie. All 10 guys. That gives them more returning experience than any other team in the country, along with one of the deepest benches. While many of the top teams are facing a good deal of uncertainty going into the season thanks to the FBI's investigation into the sport, the Shockers are as rock solid as it gets.

Another factor in Wichita's favor? Their absolute dominance on the road. Winning away from home is the toughest thing to do in college basketball, especially in conference play, but the Shockers haven't felt those woes. They have been the best road team in the country since 2009, compiling a 72-21 record in such games in that time. Given, they will be tested weekly in the AAC unlike the Missouri Valley, but with so much experience, there's no reason to think they can't keep that success going.

However, that doesn't mean all of the questions surrounding this team have been answered. Both Shamet and McDuffie are recovering from foot stress fractures they suffered this summer, but they remain on track to return by mid-November and mid-December, respectively, according to Marshall.

Once they return, both are expected to be first-team All-AAC performers. Shamet posted medial numbers as a redshirt freshman last season (11.4 points, 3.3 assists and 2.8 rebounds in 26.7 minutes per game) but was extremely efficient with an effective field-goal percentage of 59.8 and a true-shooting percentage of 62.9.

His ability to run the offense and pick his spots is the biggest key to Wichita's offense, though it's his ability to take over a game that makes the Shockers elite. There's no better example of that than his 20-point performance against Kentucky in the NCAA Tournament when he went toe-to-toe with De'Aaron Fox.

He's only expected to miss two games before returning from his foot injury (UMKC, Charleston), and assuming he's able to return to form, Shamet is the favorite to win AAC Player of the Year.

McDuffie, who will likely miss all of Wichita's non-conference schedule, stepped up as Shamet's running mate last year. He led the Shockers in scoring (11.5 ppg) as a stretch four and was a nightmare for opponents. The 6-foot-8, 212-pounder has shown the ability to hit the three consistently (35.2 percent) and the ability to blow by bigger, slower defenders. And he'll make you pay for sending him to the free throw line, where he shot 81.9 percent.

The health and production of those two stars will be major storylines to follow all season long and could have a huge impact on the AAC title race.

NEXT READ: UT-Arlington is the mid-major team poised to break through on the national stage

We'll find out about this Wichita State team right away, as they will be tested on the national stage in the Maui Jim Maui Invitational from Nov. 20-22. The Shockers will be the highest-ranked team in the field but they are joined by a number of NCAA Tournament teams. Notre Dame, Michigan, VCU, Marquette, LSU, and Cal are also taking part in the event with Wichita facing the Golden Bears in their first-round game.

Win that prestigious early-season tournament and the Shockers will make a statement to the rest of the country that they will be one of the top teams all season long. Marshall is hoping their performance in Maui will set the tone for the year.

“The last time we were in it (in 2010), we didn’t make the NCAA Tournament, because we ended up playing Chaminade,” Marshall said. “You need to play quality teams … as much as you can on a neutral floor.

“It’s a wonderful setting on that great weekend. It’s good for your program and we’re excited to be back.”

Wichita State opens the season on Nov. 10 at home against UMKC.