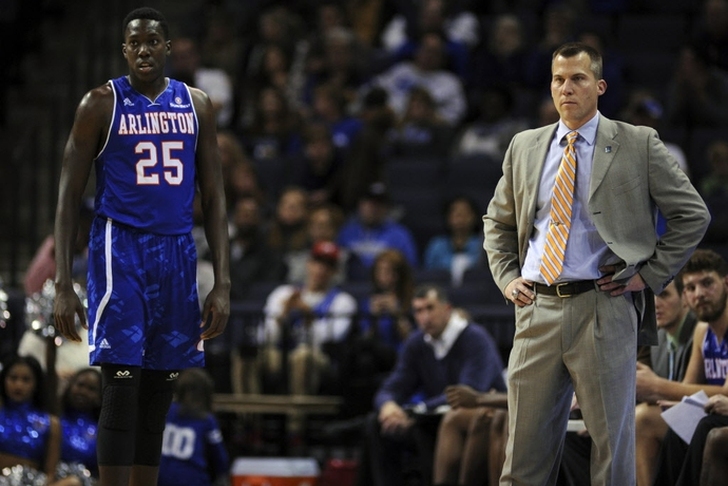 Every year, there is a mid-major team that steps up and becomes a real threat on the national stage.

Rhode Island and Middle Tennessee were those teams last year. This season, the UT-Arlington Mavericks are primed to become the ones you need to pay attention to.

Heck, they were this close to being that team in 2017.

The Mavs won the Sun Belt for the first time in school history with a 27-9 mark and looked primed to be a threat in the NCAA Tournament. However, they were upset by a game Texas State team in the conference tournament, sending them to the NIT, where they fell in the quarterfinals.

UT-Arlington returns many key players from that team, including guard Erick Neal (10.6 ppg, 6.6 apg last season) and reigning Sun Belt Player of the Year Kevin Hervey (17.1 ppg, 8.5 rpg). They are two of the six returning seniors on this year's team that has hopes of repeating as conference champs, according to head coach Scott Cross.

"This will be the most talented team that I've ever coached," Cross told Chat Sports. "The intangible aspects, we won't know until the season really gets here. I think we'll be super competitive, so I'm pretty confident we'll have that intangible. But we lost so many guys that brought toughness and grittiness to the table. That's the area of question that we won't know. Hopefully, we can raise that level. If we can just raise it a little bit, based upon the talent that we have and the length and the athleticism we have, I'm super excited about the possibilities of this team.

"This team definitely has the highest ceiling. If we can just raise the floor a little bit by getting them tougher, getting them better defensively, we have a chance to have another special year."

Cross, the reigning Coach of the Year in the Sun Belt, would know. He has been at UT-Arlington since he arrived on campus as a player in 1995. Once he playing career was over, Cross joined the coaching staff as an assistant and took over the head job in 2006.

The presence of Hervey and Neal give Cross plenty of reason to be optimistic. Hervey was an AP All-American honorable mention last season, and as good as he was, this year could be even better. He was still recovering from a torn ACL that cut his sophomore season short at the beginning of the year and worked off the lingering effects as the season went on.

After Hervey was named an All-American, Cross said the honor was just the “tip of the iceberg” in terms of what the 6-foot-9, 230-pounder could accomplish. This year, he's 100 percent healthy and has drawn national recognition as one of the top small forwards in the country.

Neal, providing valuable experience at the point, is the third-leading returner in the country in terms of assists per game.

"I think that combination is as good as any in the conference," Cross said. "You can put Erick and Hervey against any two in the league and we're right there, as good as or better than anybody."

That sentiment will be tested early this season. The Mavs have one of the toughest non-conference schedules in the entire country that features road trips to BYU, Alabama, Northern Iowa and Creighton - along with a home game against FGCU.

While those games were scheduled to test this team, Cross told me it's not about trying to boost their NCAA Tournament resume - they want to make sure they're ready to go once conference play starts.

"I think every year our schedule is one of the toughest. Maybe even last year and the year before may have been even tougher. At least this year we have more home games than we've had in the previous few years. Yes, I do believe that the non-conference will be equal or tougher than even what we'll play in-conference.

"I think this is the best year that the Sun Belt will have since I've been a part of the Sun Belt. All the schools are going to be better this year with the exception of maybe one or two that took a little bit of a hit. We were probably one that people thought may take a hit based on losing three starters and a fourth player that was our sixth or seventh man, but I feel like we'll be more talented than we were last year. There are so many returning players. Out of the top 15 in the league, I think 11 or 12 of them were underclassmen, so I think the Sun Belt is going to have an outstanding year this year."

The Mavs are the favorite to win the Sun Belt again and are looking to make the Big Dance for the first time since 2008 - but it's not NCAA Tournament or bust for this group. They're focused on taking this season one step at a time, one game at a time, and believe that will make them successful.

"I don't put an expectation on an outcome," Cross explained. "I put an expectation on playing as hard as we possibly can and getting better every day. Those are definitely goals that we would like to achieve, that I don't want to put an expectation on a season. You don't go to the NCAA Tournament and you feel like the season is a failure when you can win 27, 28 games, maybe go to Madison Square Garden. There are so many opportunities to do some great things. I don't want to put that type of pressure on our guys. For them, I want their focus to be on playing as hard as they possibly can, playing together and getting better every single day.

"Our slogans have been 'Take The Stairs' and 'Championships Are Won Today.' That basically means we have to take care of today. Tomorrow is not promised to us. We have to become better today and we need to have that attitude if we want to win a championship in March and go to the NCAA Tournament. We have to win one today, and that has to be their mindset.

"'Take The Stairs' is similar in the fact that we can't look for the easy way. It's going to take getting in the gym and putting in the time. It's going to take diving on the floor and grabbing loose balls and taking charges and being tough and physical. We have to do all of those things if we want to be a successful team. I feel like this team will adopt that persona, and once they do, we can be a successful basketball team."

That said, last year's disappointment of failing to make the tournament and narrowly missing out on Madison Square Garden in the NIT has stuck with this group.

"I think it's probably a good thing in terms of motivation for this year," Cross told me. "Not fulfilling that goal can be a motivating factor for the guys. We'll have so many seniors on this year's team. It's their last opportunity to do it. They may put a little extra pressure on themselves, but I always feel like when it's your last chance, you're going to lay it all on the line and play a little bit harder, a little bit tougher. In the end, I would rather have than and maybe be a little uptight because they want to do well, That toughness and that playing hard is going to win out in the end."

I expect that motivation, along with this group's experience and talent, to be the reason why the Mavs could have one of the best seasons in school history. This is a team worth keeping an eye on all season long - especially in March.

UT-Arlington officially opens practice this weekend. They will host Loyola Marymount in their season-opener on Nov. 11.