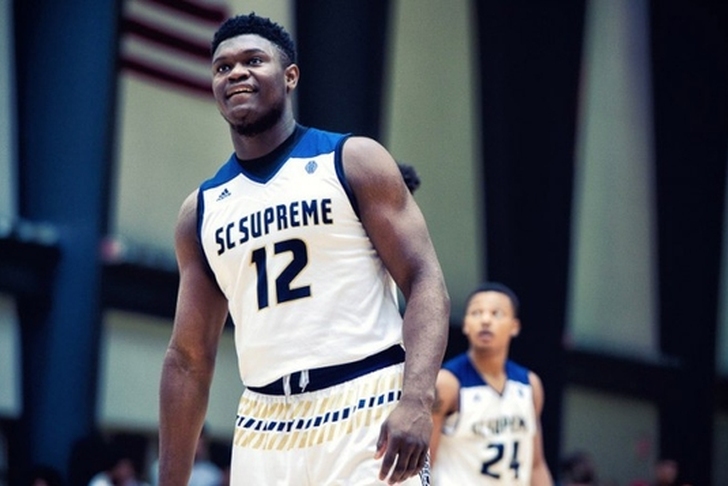 An Adidas rep that is facing fraud and corruption charges from the FBI for steering a top 2017 recruit to Louisville was also trying to influence a 2018 super-recruit to commit to Kansas, multiple sources told Chat Sports exclusively Thursday afternoon. The sources have been independently sourced (one inside the Big 12 with coaching ties to the SEC, and another recruiting expert with knowledge of South Carolina AAU basketball) and provided nearly-identical information.

What We Know:
The Adidas employee, arrested on Tuesday, had been taking a similar approach with the prospect on behalf of Kansas, the leading Adidas college basketball program. The sources both said the player is a top prospect that plays for a South Carolina AAU team on the Adidas circuit and, as of Thursday afternoon, is expected to visit Kansas' Late Night in the Phog Midnight Madness event this weekend.

The player who fits the description is 2018 #1 overall player (according to 247Sports.com, rated #2 by several other services) five-star small forward Zion Williamson (Spartanburg, SC), who plays for the Adidas-sponsored SC Supreme.

Our sources both say it's unclear if anyone on the Kansas coaching staff knew about Adidas' interference in the recruitment of Williamson.

On Tuesday, Adidas’ director of global sports marketing for basketball James “Jim” Gatto was arrested by the FBI and accused of providing $100,000 to an “All-American high school basketball player”, widely identified as 2017 #19 overall prospect Brian Bowen - now a Louisville freshman - in exchange for the player committing to play basketball at Louisville, another top Adidas school. Bowen has not been officially named in the probe, but multiple media outlets have named him as Louisville player involved and the school has suspended him from all NCAA activities.

What To Watch For:
Williamson made his offical visit to Kansas this past weekend for their "Late Night in the Phog" Midnight Madness event. He was supposed to visit Kentucky last weekend but canceled due to a death in the family but plans to reschedule the visit.

More on Williamson:
Williamson is the No. 1 ranked player in the 2018 class by 247Sports (rated #2 by several other services) with Kentucky - a Nike school - and Kansas serving as his two favorites. A number of other schools, including Clemson, Duke, North Carolina, South Carolina, and UCLA, are also believed to be in the mix for him.

While Adidas has been recruiting Williamson for Kansas, fellow five-star prospect Immanuel Quickley has been one of the biggest factors in recruiting him to Kentucky. Williamson and Quickley are good friends and openly discussed wanting to play together in college, but stopped short of saying they were a package deal.

Quickley committed to Kentucky on Sept. 22.

Download the Chat Sports app for iPhone or Android for more on this story as it breaks. ​

The 6-foot-7, 230-pounder has official visits scheduled to Duke on Oct. 20 and UCLA on Oct. 27. He made unofficial visits to both Clemson and South Carolina this summer.

Williamson has become a YouTube sensation for his high-flying dunks while playing for SC Supreme and his high school, Spartanburg Day School. Check out his highlight film below. Download the Chat Sports app for iPhone or Android for more on this story as it breaks.