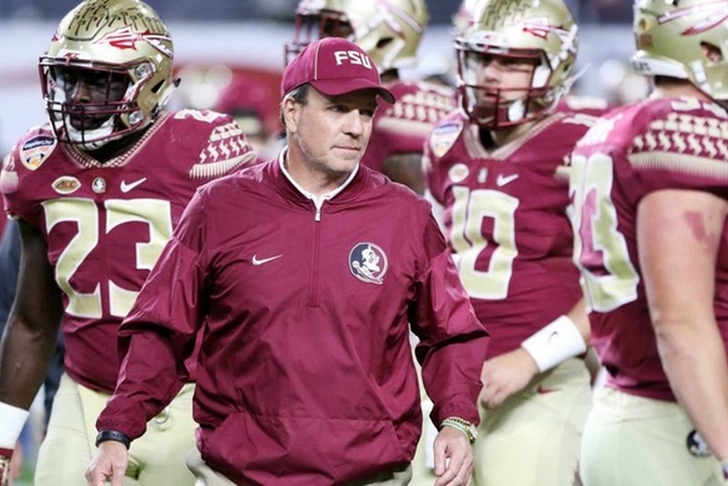 Florida State head coach Jimbo Fisher has resigned in order to take the same position with the Texas A&M Aggies, according to ESPN's Mark Schlabach.

Jimbo Fisher has resigned as FSU's coach and will be named the new coach at Texas A&M, sources told ESPN. He will not coach in Saturday's regular-season finale against Louisiana-Monroe. FSU is planning a news conference for this afternoon

Fisher was hoping to wait until after Florida State's game against UL-Monroe on Saturday to make a decision, but the Seminoles were pressuring him to make up his mind before then.

The game was postponed due to Hurricane Irma earlier this season and was originally canceled, but the Seminoles need the win to become bowl eligible at 5-6, so the game was rescheduled.

Texas A&M had been plotting to replace now-fired Kevin Sumlin with Fisher ever since their season-opening loss to UCLA, hoping to lure him because of his relationship with athletics director Scott Woodward, who held the position at LSU when Fisher was an assistant there.

Fisher's new deal with Texas A&M will reportedly pay him over $7 million per year, making him the third highest-paid coach in the country.

Fisher had been trying to strong arm the school to building a standalone football facility and had flirted with taking the LSU head coaching job each of the last two years. This time, Florida State essentially called his bluff.

He is 83–23 in eight seasons as FSU's head coach, winning at least 10 games for five consecutive years before this season. He also led the Seminoles to three straight ACC titles (2012-14) and the 2013 national championship.