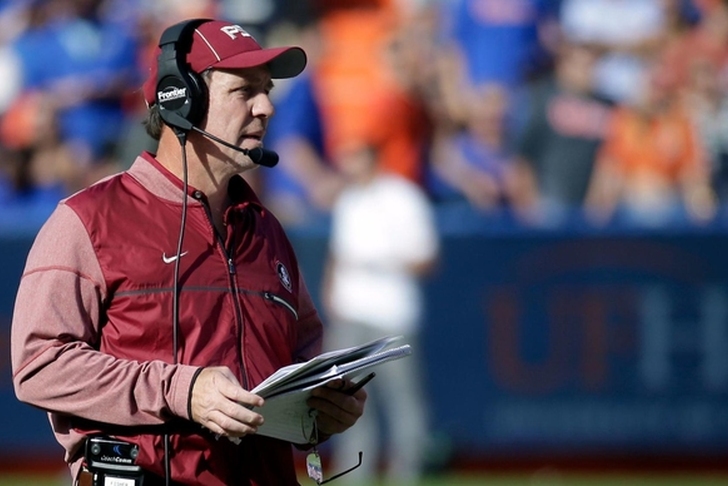 It certainly didn't take long for the college football coaching carousel to get going following the end of the regular season on Saturday. Florida, Mississippi State, Ole Miss, and UCLA have all filled their head coaching vacancies, while major openings are still looming at Arkansas, Nebraska, and Texas A&M. Tennessee is also continuing their coaching search, but it has turned into a complete mess. Here are all the latest coaching news & rumors you need to know:

Tennessee now targeting Dave Doeren
After backing out of their agreement with Ohio State defensive coordinator Greg Schiano and being turned down by Jon Gruden, David Cutcliffe, Mike Gundy, and Jeff Brohm, Tennessee has turned their attention to NC State head coach Dave Doeren, according to Sports Illustrated's Bruce Feldman.

Tennessee’s coaching search has turned its focus eastward. A source told SI that the Volunteers are now targeting NC State head coach Dave Doeren as of Thursday morning, and that in response NC State has offered him a new contract with increases in both compensation and term, as well as an enhanced salary pool for his staff.

Doeren is 33-30 in five seasons with the Wolfpack, posting a winning record each of the last four seasons. However, this year was the first time he led NC State to a winning record in ACC play (6-2).

UPDATE: Doeren has decided to stay at NC State

However, Fisher has refused to address the topic publically, and now FSU is putting pressure on Fisher to make a decision about his future sooner rather than later, according to ESPN's Mark Schlabach.

Florida State officials are urging Jimbo Fisher to decide whether he will remain the school's football coach beyond this season or accept a lucrative offer from Texas A&M, sources told ESPN on Thursday.

ESPN reported last week that several Florida State officials expect Fisher to leave and have been preparing to target his replacement.

Fisher was hoping to wait until after Florida State's game against UL-Monroe on Saturday to make a decision. The game was postponed due to Hurricane Irma earlier this season and was originally canceled, but the Seminoles need the win to become bowl eligible at 5-6, so the game was rescheduled.

Fisher is 83–23 in eight seasons as FSU's head coach, winning at least 10 games for five consecutive years before this season. He also led the Seminoles to three straight ACC titles (2012-14) and the 2013 national championship.

Arizona State to wait to announce coaching hire
The Arizona State Sun Devils had reportedly reached a deal to hire former NFL head coach and current ESPN analyst Herm Edwards to be their next head coach, but Feldman reports that it could be "a few more days" before Arizona State actually makes a hire.

I'm told it could be a few more days before #ASU is ready to announce its new football coach. Nothing imminent, says source.