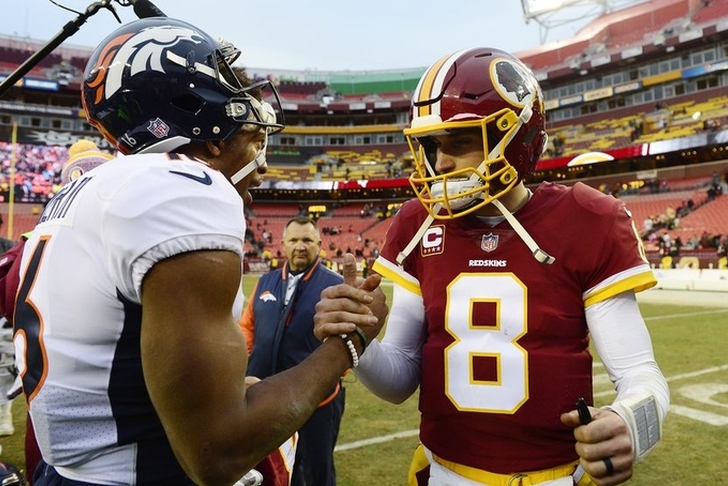 The NFL offseason is in full swing and there are a ton of news and rumors buzzing around the league with the NFL Draft and new league year approaching, especially regarding the futures of a couple of starting-caliber quarterbacks. Here are the latest news & rumors you need to know from around the NFL:

What the Broncos may offer Kirk Cousins
Kirk Cousins is set to hit free agency after the Washington Redskins traded for Alex Smith and a number of teams are planning to pursue him on the open market. The Denver Broncos are expected to be at the forefront of the race to land him, and Charles Robinson of Yahoo! Sports reports what Denver could be willing to offer him.

5. There is going to be strong Kirk Cousins buzz all week as his market takes shape. If #Broncos are willing to pay $25 mil per and $80 mil+ gteed, I believe he ends up there. If not, I think his recruitment gets wild among other suitors.

The New York Jets are reportedly willing to "pay whatever it takes" to sign Cousins and mutual interest exists between him and the Minnesota Vikings.

Cousins passed for 4,093 yards with 27 touchdowns and 13 interceptions this past season. It marked the third straight year in which he has passed for over 4,000 yards since becoming Washington's starting quarterback.

With the March looming and some murkiness around #Vikings QB Teddy Bridgewater’s contract, he is expected to be a free agent, sources say. Minnesota is not planning to assert that his contract tolls and Bridgewater is proceeding as if he’s a free agent.

Bridgewater suffered a gruesome non-contact injury during practice prior to the 2016 season in which he dislocated his knee and tore multiple ligaments in his left leg. He passed for 3,231 yards with 14 touchdowns and nine interceptions in 2015, his last season on the field.

Josh Rosen willing to play for Browns
Former UCLA quarterback Josh Rosen is expected to be a top-five pick in the draft but made headlines this season when he said he'd rather go to the right team later in the draft than to the wrong team higher in the draft.

Many took that as him saying he didn't want to play for the Cleveland Browns, but Rosen says that's absolutely not the case.

“I’ve never said anything about not wanting to play in Cleveland,” Rosen said. “I don’t know where that came from. There’s absolutely no foundation in reality in that [report].”

However, one report suggests that the Browns - who own the No. 1 and No. 4 overall picks in the draft - are not in love with any of the top quarterbacks in the draft.

Rosen passed for 3,576 yards with 26 touchdowns and 10 interceptions in 11 games last season.