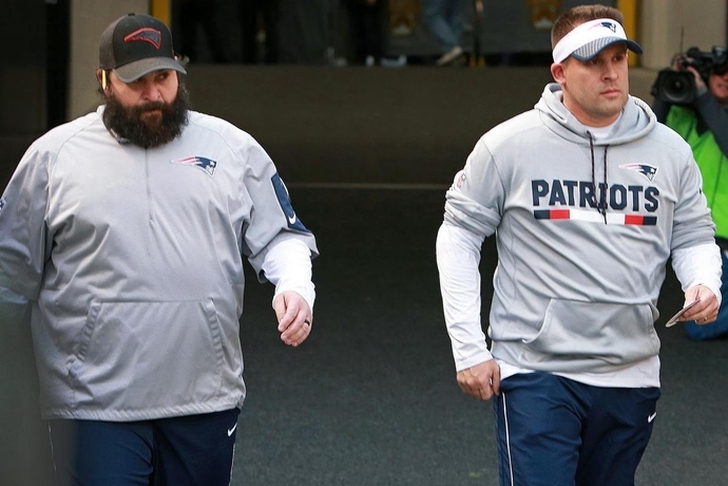 Black Monday didn't disappoint as the Detroit Lions fired head coach Jim Caldwell and the Chicago Bears parted ways with John Fox after both Jack Del Rio and Chuck Pagano were fired on Sunday by the Oakland Raiders and Indianapolis Colts, respectively. There are no Grumors in today's coaching rumors roundup, but plenty of possible coaches landing on new teams for 2018.

Matt Patricia To The Lions
NFL Network’s Ian Rapoport reported that Lions general manager Bob Quinn — a former New England Patriots personnel man  — will hold an open search in looking for his next coach, but Patriots defensive coordinator Matt Patricia’s at the top of the list.

Patricia is 43 years old and has never been a head coach in the NFL. However, he has been learning from one of the greatest NFL minds in Bill Belichick and could get the Lions back on track. The former rocket scientist has done a little bit of everything since joining the Patriots in 2004. He's served as an offensive assistant, offensive line coach, a linebackers coach, a safeties coach and took over as the defensive coordinator in 2012.

McDaniels has rebuilt his reputation while leading the Patriots’ offense for the past five seasons after a less-than-successful head coaching debut in Denver. Perhaps he can bring some of the "Brady Effect" to a Giants team who may be looking for a new franchise quarterback. McDaniels shouldn't have the final say in personnel decisions, especially in the draft. That's what ruined his tenure with Denver.

“You normally just focus on the game at hand,” Reid said of his staff's head coaching interviews. “There’s nothing you can do anyways. You are prepping for your game and that is what you are doing. They have rules in place for all that. That is what I expect from the guys. I have had a number of guys go through this. It has never really been a distraction so that is a good thing.”

At 55 years old, Toub is older than many first-time head coaches but continues to draw interest from teams due to his impact on special teams. Nagy is getting a lot of attention, like most Reid offensive coordinators over the years.