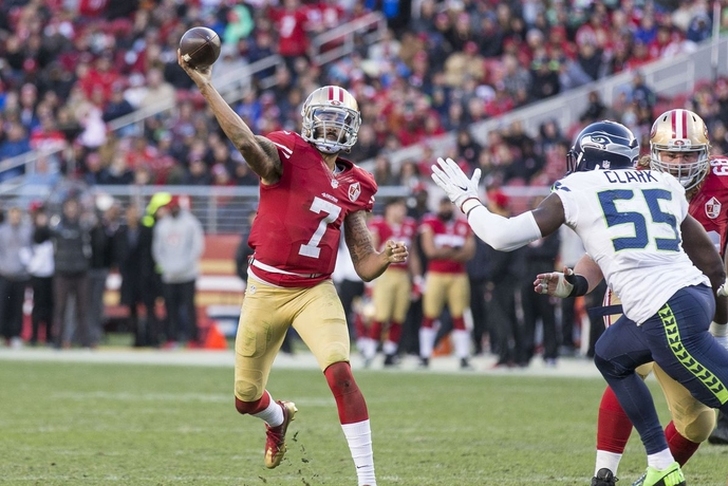 Colin Kaepernick remains unsigned as we're two weeks into the NFL season, and it's looking more and more unlikely that he'll be on a roster at some point this season. However, as we saw with the Miami Dolphins and Jay Cutler, things can change in an instant, and with Kaepernick publicly saying he wants to play, there's at least some chance he gets signed. Here are the five teams that are the most likely to sign Kaepernick at some point this season:

5) Los Angeles Rams
Los Angeles is counting on Jared Goff, last year's No. 1 pick, to step up and become a viable starter this year. He has been better through two games but has still been a below-average quarterback. If he struggles, the Rams don't have any real backup plans with Sean Mannion and Dan Orlovsky behind Goff on the depth chart. Kaepernick would be the best quarterback on LA's roster.

That said, Los Angeles is determined to ride this Goff experiment out. Kaepernick is only an option if Goff gets hurt.

4) New York Jets
Josh McCown is the starter, but he has only played in 26 games over the last three years and two games this season. Once he gets hurt (which history says will happen), it's only going to be a matter of time before the Jets realize that they are doomed with Bryce Petty and Christian Hackenberg (which is a realization they may be coming to already). Both have a long way to go before they are ready to contribute, and with Todd Bowles coaching for his job this year, Kaepernick would appear to give them the best chance to win. The Jets and Kaepernick were already linked last offseason.

3) Seattle Seahawks
Seattle already flirted with the idea of adding Kaepernick before passing over concerns about a potential locker room split over he and Russell Wilson. That said, if Wilson gets hurt, it's hard to believe Seattle will pass again. Kaepernick is a major upgrade over current backup Trevone Boykin and the Seahawks wouldn't have to change their offense. For a team with Super Bowl aspirations, they need the best player available.

2) Cincinnati Bengals
The feeling in Cincinnati's locker room is that they prefer Colin Kaepernick over Andy Dalton given Dalton's massive struggles. However, there are a few things that could keep them from signing Kaepernick. First, Dalton's contract is guaranteed through the 2018 season so they may be inclined to at least let him play a few more weeks. Secondly, backup A.J. McCarron is a player that many around the league feel has starting potential.

If they were to bench Dalton, it's much more likely that they'd bench him for McCarron instead of Kaepernick. But the locker room's high level of interest in Kaepernick puts them high on this list.

1) Baltimore Ravens
Baltimore has shown the most serious interest in Kaepernick and was reportedly close to signing him, but a tweet from Kaepernick's girlfriend is what ultimately changed their mind. Head coach John Harbaugh and general manager Ozzie Newsome were both in favor of adding Kaepernick, keeping this door open. They seem willing to look past that tweet if Flacco were to get injured - or if they aren't happy with backup Ryan Mallett at any point this season.