NFL Rumors: Why Ravens Passed On Kaepernick, Taylor Will Start For Bills & More 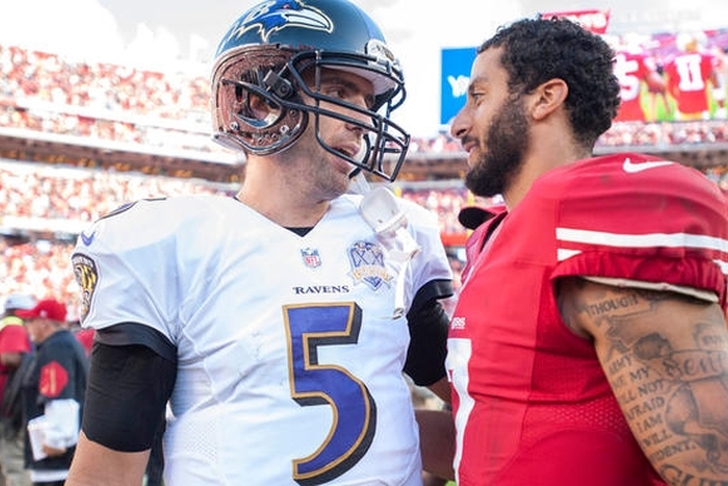 The NFL regular season is set to kick off tomorrow night, but that doesn't mean everything is set in stone for all 32 teams around the league. Injuries are already playing a major role in the season, as a pair of big-name starters are trying to get back on the practice field in preparation to play this weekend. Here are all the latest NFL news and rumors you need to know:

Why the Ravens passed on Colin Kaepernick
The Baltimore Ravens were exploring signing Colin Kaepernick to serve as Joe Flacco's backup earlier this preseason before ultimately passing on him. Apparently, they really wanted him, but former linebacker Ray Lewis told Showtime's "Inside the NFL" said that a tweet from Kaepernick's girlfriend is what ultimately changed their mind.

"Then, his girl [Colin Kaepernick's girlfriend] goes out and put out this racist gesture and doesn't know we are in the back office about to try to get this guy signed," Lewis said. "[Owner] Steve Bisciotti has said it himself, 'How can you crucify Ray Lewis when Ray Lewis is the one calling for Colin Kaepernick?'

"When they (Ravens) called me, it was to say, 'Yes or no?' ... We were going to close the deal to sign him ... Steve Bisciotti said, 'I want to hear Colin Kaeperkick speak to let me know that he wants to play football.' ... And it never happens because that picture comes up the next day."

Here's the tweet from Nessa Diab, Kaepernick's girlfriend, which relates Lewis and Bisciotti to characters played by Samuel L. Jackson and Leonardo DiCaprio in the movie Django Unchained.

Head coach John Harbaugh would not comment on the matter when asked on Wednesday.

"I'm not exactly sure what all was said. But I can tell you this: I'm way past that," Harbaugh said. "I haven't even thought about that for weeks. Our focus is Cincinnati."

"Tyrod Taylor has been cleared from the concussion protocol and we expect him to start on Sunday." #NYJvsBUF pic.twitter.com/XwTkweghrS

Taylor suffered the injury after slamming his head on the turf while getting sacked in the third preseason game. He passed for 3,023 yards with 17 touchdowns and just six interceptions while rushing for a career-high 580 yards and six more scores in 15 games last year.

Demaryius Thomas returns to practice
Thomas practiced on Wednesday for the first time since suffering a groin injury in the Denver Broncos third preseason game, indicating that he will be ready to go for the team's season opener against the Los Angeles Chargers. The team had been holding him out as a precaution and always expected him to play Week 1.

Thomas, who has played in every game each of the last five seasons, caught 90 passes for 1,083 yards and five touchdowns last season.