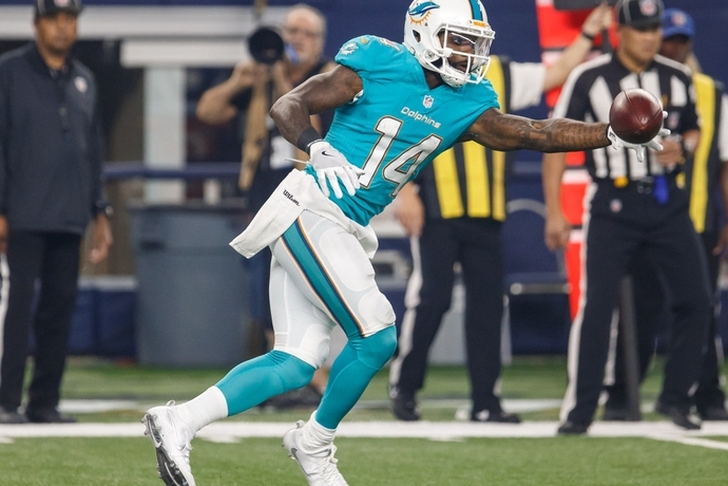 The Miami Dolphins haven't come close to reaching a contract extension with star wide receiver Jarvis Landry, and as he enters the final year of his rookie contract, Miami is expected to "seriously listen" to trade offers.

Landry has been one of the NFL's best receivers during his first three years in the league, catching 288 passes for 3,051 yards and 13 touchdowns in his career. Elite players like Landry rarely become available, but with rosters mostly set at this point of the season, who could possibly land him? Here are the four teams most likely to pull the trigger on a trade:

4) New England Patriots
Couldn't you just picture Bill Belichick sending a first-round pick to Miami for Landry? New England has a need for a slot receiver following Julian Edelman's season-ending injury and Landry is one of the best in league. Of course, the Dolphins would be very hesitant about sending their best offensive player to the Patriots given the way they've dominated the division. Would they want to contribute to the continuation of that?

3) Buffalo Bills
Another division rival, the Bills make sense for a number of reasons. First off, they need a wideout after trading Sammy Watkins and Anquan Boldin's retirement. Secondly, they have assets that would appeal to Miami with multiple draft picks in the first, second and third rounds in the 2018 draft. However, it doesn't seem like Buffalo is willing to part with those and want to rebuild through the draft - though Landry could make them rethink that.

2) Chicago Bears
Chicago also lost a starting receiver for the season this weekend in Cameron Meredith, who suffered a torn ACL against the Titans. They are also rebuilding but need to surround Mike Glennon and Mitchell Trubisky with weapons if they're going to be successful. I know the Bears are hoping that 2015 first-round pick Kevin White can finally stay healthy, but Landry would give them a reliable option and a perfect complement to White's skillset. However, that trade up for Trubisky cost them some picks that could come in handy here.

1) Cleveland Browns
The Browns are easily the most likely option for a Landry trade. Forever in rebuilding mode, Cleveland has stockpiled assets but have shown they're willing to flip them for talented players they want to sign long-term (i.e. Jamie Collins). With one of the worst receiving cores in the league, Cleveland is actively looking to acquire a wideout via trade. The Browns have the assets, desire and motivation to make something happen, which is why they're the most likely to get a deal done.