#1 Villanova vs. #1 Kansas Preview & Prediction: Which One Seed Will Advance To The Title Game? 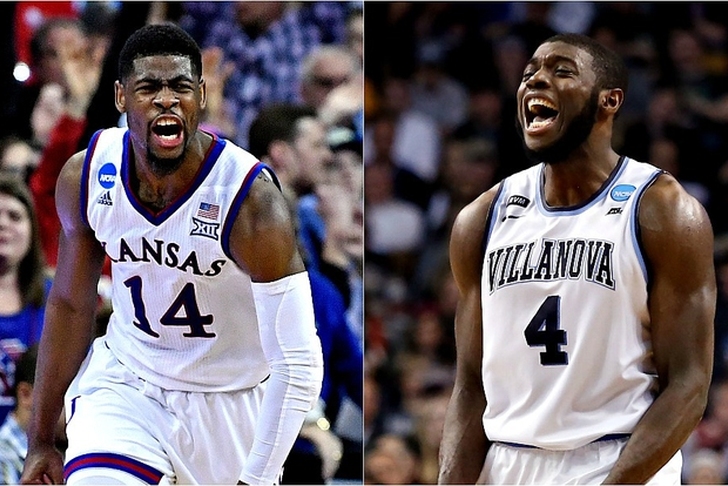 Despite the multitude of upsets and Cinderella runs in this NCAA Tournament, we get a matchup of one seeds and elite programs when the Villanova Wildcats will take on the Kansas Jayhawks. Villanova is rolling, willing every game in the tournament by at least 12 points while Kansas has won three consecutive games by four points, including their overtime thriller against Duke in the Elite Eight.

Which of these teams will get the chance to play for a national championship? Here's our full preview and prediction:

What they're saying about the Villanova Wildcats:
Here Are 5 Reasons Why Villanova Can Win The National Championship (Chat Sports)
Villanova’s Jalen Brunson named AP first team All-American, Mikal Bridges on the third team (VU Hoops)
Three blue bloods, a miracle and the Final Four no one saw coming (ESPN)

What they're saying about the Kansas Jayhawks:
Kansas Basketball News: Malik Newman Rising Up NBA Draft Boards, Considered A "Value Pick" (Chat Sports)
According to Vegas, KU not even second choice at Final Four (Kansas City Star)
How much money is on the line for KU's Bill Self as Jayhawks enter the Final Four? (Wichita Eagle)

Keys to the game:
How does Kansas handle Villanova's bigs?

For as good as Villanova's guards are, their big men present the biggest matchup problems for opponents. Both Eric Paschall and Omari Spellman are very comfortable playing on the perimeter, which pulls the opposing big men out of the paint which opens up driving lanes. And, many times, those opposing big men are uncomfortable defending out there (Udoka Azubuike is one of those big men), which is one area Villanova creates an advantage.

Kansas used Svi Mykhailiuk on Marvin Bagley and doubled him on the catch in their game against Duke, but that strategy won't be useful again because 1) Paschall/Spellman can play on the perimeter and 2) Villanova has no one you can double off of.

I'd bet head coach Bill Self either employs a zone to protect Azubuike from having to defend on the perimeter or to simply rely on Mykhailiuk to go up against Paschall/Spellman one-on-one. Once again, his play on the defensive end and on the glass will be key.

Can Kansas create an advantage on the perimeter?

It's tough to imagine a spot where Villanova is weak, so if Kansas is going to win this game, they're going to have to use their strength - their perimeter game - to outplay the Wildcats.

Malik Newman has made Kansas a very dangerous team of late by taking much of the load off of Big 12 Player of the Year Devonte' Graham. He has led KU in scoring in six of their last seven games (including 32 points against Duke) and has been their best player in the month of March. Can Newman and Graham outplay Jalen Brunson and Mikal Bridges?

Prediction: Villanova wins 85-74
I simply have too much confidence in this Villanova team to pick against them. They have the personnel to matchup against KU's four-guard lineup and I expect their bigs to have success against Azubuike. That, plus Villanova's multi-dimensional offensive attack, will allow them to go on a run to create separation in the second half.