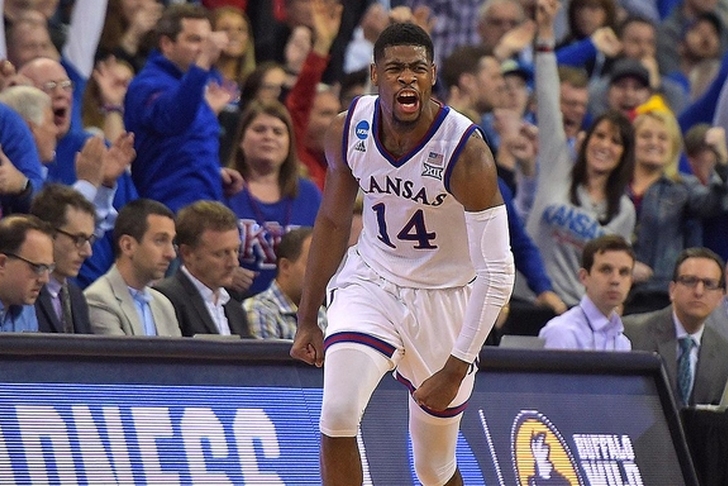 The performance was just the latest in a string of quality games Newman has played since a February loss to Baylor, and uncoincidentally, KU has posted a 12-1 record since that disappointing loss.

“Here of late, Devonte' [Graham] has got a sidekick or you could even say Malik has got a sidekick in Devonté because he has been our best player without question this past month,” Kansas head coach Bill Self said on Monday’s Final Four coaches teleconference.

The fact that Newman is playing well isn't exactly a surprise. He was a five-star recruit in the 2016 class that demonstrated the offensive prowess we've seen from him in recent weeks.

However, he struggled during his freshman season at Mississippi State and ultimately chose to transfer after testing the NBA Draft waters - a move that Self credits for Newman's improvement.

“He was one of the most highly recruited guards in the country coming out of high school and we missed out on him and he went to Mississippi State, obviously,” Self said. “He was nicked up that year (2015-16) and probably didn't have the freshman year that everyone thought he would, and he went through the (NBA) combine, and certainly at the combine the feedback was that he needed to certainly improve in some areas.

“I thought last year he did a great job of doing things that the NBA people said he needed to improve on. But when you're coaching a redshirt, when they're on the scout team and they take a bad shot or don't guard one day as well as they should, it's usually not the same emphasis if you're eligible and playing ample minutes. He probably — although he looked great last year to us — he probably got by with some stuff. Then this year, I felt like he's always been a good offensive player, but I was on his butt pretty hard for not doing some other things, and that probably limited his offense, as well.”

While he may have needed a few months to shake off some of the rust of not playing during his transfer year, NBA scouts are certainly taking note of his play late in the season. Newman was not projected to be drafted earlier this season if he chose to enter the 2018 draft, yet his recent play - including that performance against Duke, has propelled him to being a projected second-round pick.

“He reminds me of Ray Allen in size, personality and shooting ability,” a Western Conference executive told NBA.com's David Aldridge. “He’s on the come so to speak. Value pick.”

Whether or not Newman decides to enter the draft remains another matter entirely. Coming out of high school, he had planned to be a one-and-done prospect and he has always had his eye on the NBA.

People in NBA circles expect him to at least test the draft waters again this offseason but leave the door open for returning to school.