College Hoops Power Rankings: There's Virginia, Then Everyone Else 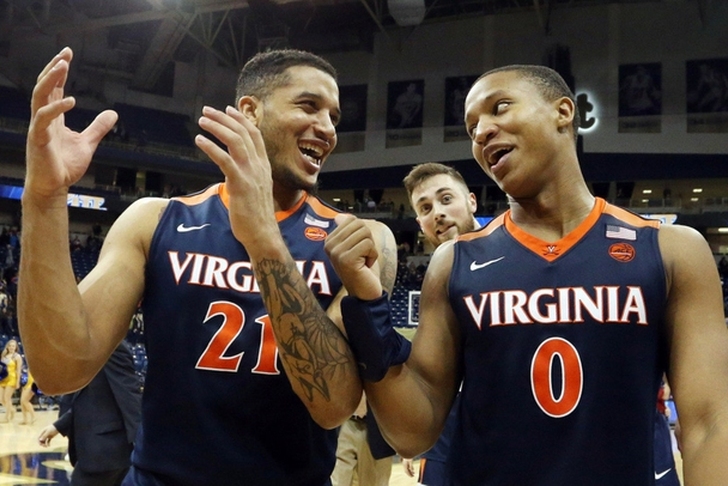 Let's start with the good news. March starts on Thursday! The college basketball regular season is winding down (or already over for some conferences) and the first conference tournaments are starting this week/weekend. That means quality, meaningful basketball games will be on your televisions virtually all day long.

And this weekend's games offered plenty of drama as well. Kansas won at least a share of their 14th consecutive Big 12 title - an NCAA record - thanks to their win over Texas Tech, while Villanova was upset at Creighton.

Now to the bad news.

The on-court excitement was largely overshadowed by all of the latest happenings in the FBI investigation into corruption and bribery in the sport. On Friday, a Yahoo! Sports report detailed a number of former and current players - including Alabama's Collin Sexton, Duke's Wendell Carter Jr., and Michigan State's Miles Bridges - who allegedly received impermissible benefits from former NBA agent Andy Miller, his former associate Christian Dawkins, and ASM Sports. Only two of the active players mentioned in the report (Texas' Eric Davis and San Diego State's Malik Pope) have been held out to this point.

However, things got a bit more serious for Arizona on Friday night after ESPN reported that Wildcats head coach Sean Miller is caught on FBI wiretaps talking with Dawkins about arranging a $100K payment to secure the commitment of star center and projected No. 1 pick Deandre Ayton. Miller did not coach the team in Saturday's 98-93 overtime loss to Oregon, but Ayton played and had a monster night (28 points, 18 rebounds, four blocks).

So, with that has the backdrop, who are the very best teams in the country going into the regular season's final week? Here are my latest Top 25 Power Rankings:

The Gaels closed the regular season with blowout wins over Pepperdine and Santa Clara before this week's WCC Tournament. Expect Jock Landale (21.5 ppg, 10.2 rpg) to be on an All-American team.

Middle Tennessee has won 15 of their last 16 games and three of their five losses on the year have been to quality teams in Auburn, USC, and Miami - and those were all by single digits. Nick King (21.5 ppg, 8.3 rpg) and Giddy Potts (13.1 ppg) lead a talented Blue Raiders team that has won an NCAA Tournament game each of the last two seasons.

Virginia Tech picked up a big win over Clemson this week but followed it up with a disappointing home loss to Louisville. They host Duke on Monday in a game that would give them their sixth Quadrant 1 win.

WVU seems to have gotten back on track with double-digit wins over Baylor and Iowa State this week. Closing games is still an issue with this group, but we know how talented they are.

This will be the third time this year I will have asked if Kentucky has finally figured it out, and though I was wrong the first two times...has Kentucky started to figure this thing out? The Wildcats have finally established their roles, which has led to them playing more consistently on both ends of the court. Unsurprisingly, the wins - three straight over Alabama, Arkansas, and Missouri - have followed.

The Vols rebounded from a tough stretch with back-to-back wins over Florida and Ole Miss this week to re-affirm their place among the top 20 teams in the country.

No one wants to face this NC State team right now. They've won seven of their last nine games - including a 92-72 drubbing of Florida State on Sunday - and are peaking at the right time. The Wolfpack are an incredibly deep team with nine players averaging over 15 minutes per game, and that allows them to maintain their constant pressure on defense.

I don't know how this Arizona team is going to look without Sean Miller moving forward, but I do know they're 0-1 without him and they struggled mightily this week without Allonzo Trier (19.6 ppg), who has been ruled ineligible after his second failed performance-enhancing drug test. If Deandre Ayton is ruled ineligible, this team will be in freefall.

Nevada clinched the Mountain West regular-season championship this weekend with a win over Colorado State. Led by Caleb Martin (19.2 ppg, 5.1 rpg) and Jordan Caroline (17.0 ppg, 8.7 rpg), this is another group no high seed wants to see in the tournament.

Auburn has struggled defensively without Anfernee McLemore (7.4 ppg, 5.3 rpg, 2.7 bpg) who is out for the season, giving up over 70 points in a win over Alabama and loss to Florida. Consistency has been a problem for the Tigers of late - they're 3-3 in their last six games.

The Bearcats don't have a great resume (wins over Houston and Buffalo are the only victories they have over NCAA Tournament teams), but they took care of business this week. Despite having the country's second-best defense, Cincy has offensive questions that continue to show up whenever they play quality competition.

The Zags continue to win (11 in a row) but have games where they look vulnerable against much lesser competition - like their 77-72 comeback win over San Diego this week.

Ohio State heads to Madison Square Garden for Big Ten Tournament following a blowout win over Rutgers and a double-overtime win over Indiana. They can still be overreliant on Keita Bates-Diop (19.2 ppg, 8.9 rpg) offensively, but they have real second-weekend tourney expectations.

Texas Tech has lost three games in a row which, unsurprisingly, has come when star point guard Keenan Evans (17.2 ppg, 3.3 apg) hasn't been healthy due to a toe injury. As good as they are defensively, they need to have a healthy Evans running the show on offense for them to be a top-tier team.

Speaking of unsurprising things, John Beilein's squad is peaking at the right time as they've won seven of their past eight games. They're still a perimeter-oriented team that is deadly from three-point range but are playing better defense (12th in adjusted defensive efficiency) than we've seen in years past and take great care of the ball (second nationally in turnover percentage).

Purdue is heading to MSG on a three-game win streak and got Vincent Edwards back from an ankle injury in Sunday's blowout win over Minnesota. They've shown signs of weakness this month but are one of two teams (Michigan State) that rank in the top 15 in both adjusted offensive and defensive efficiency.

Rhode Island? At No. 9? Yes. I'm really high on the Rams because of their defense - they rank eighth nationally in steals, sixth in three-point defense, and third in turnovers forced. That, plus the fact they've only lost one game in which E.C. Matthews (13.2 ppg, 3.8 rpg) has finished (even though he was playing through an injury in that game), makes them one of my favorites.

The Shockers are doing what a veteran team does by turning it on at the right time, winning six games in a row and eight of their last nine games overall. Their defense isn't as good as we're accustomed to seeing - they struggle to defend the three - but their offense (sixth in adjusted offensive efficiency) has been making up for it.

Marvin Bagley III (21.1 ppg, 11.2 rpg) returned for Duke's 60-44 win over Syracuse on Saturday and should be good to go for the remainder of the season. They've won five games in a row and one of the biggest reasons why has been their defense - the Blue Devils are giving up just 55.6 points per game during this stretch. We'll know how legit this turnaround is this week when they face Virginia Tech in Blacksburg on Monday and when they host UNC on Saturday.

This was the year when Kansas' streak was supposed to end. Instead, they've won seven of their last nine games (and four in a row) thanks to the play of Devonte' Graham (17.9 ppg, 7.1 apg) and their ability to close out close games. The Jayhawks are 9-2 in games decided by six points or less.

NEXT READ: National Player Of The Year Race, Marvin Bagley's Injury, & More Takeaways From The Past Week Of College Basketball

Going small has paid off for UNC as they've won six games in a row thanks to their efficient offense and improved three-point shooting. They'll be tested this week against Miami before facing Duke on Saturday.

Xavier is set to end Villanova's four-year run at the top of the Big East if they can beat both Providence and DePaul this week. Led by Trevon Bluiett (19.2 ppg, 5.6 rpg, 2.7 apg), a legitimate candidate for National Player of the Year, the Musketeers are in line for a one-seed.

On one hand, Michigan State is a team that has been highly ranked all season, has the second-fewest losses of any team in the country and has won 12 games in a row. On the other, they almost lost to Indiana, Iowa, Northwestern, and Wisconsin this month. Which Michigan State team is the real one?

Villanova loses and stays at No. 2. Why? Phil Booth is still working his way back into the rotation and I'm holding firm, for at least one more week, that the Wildcats are the best team in the country when fully healthy. However, going 3-3 in the past three weeks certainly isn't a good look for them.

While other top teams in the country suffer the occasional loss, Virginia has remained consistent, making them the unquestioned No. 1 team in the country. Their dominant defense - on pace to be the best in the analytics era (2002) - was on full display on Saturday when they limited Pitt to seven(!!!) points in the first half. In fact, they haven't given up more than 60 points in a game since Jan. 31.