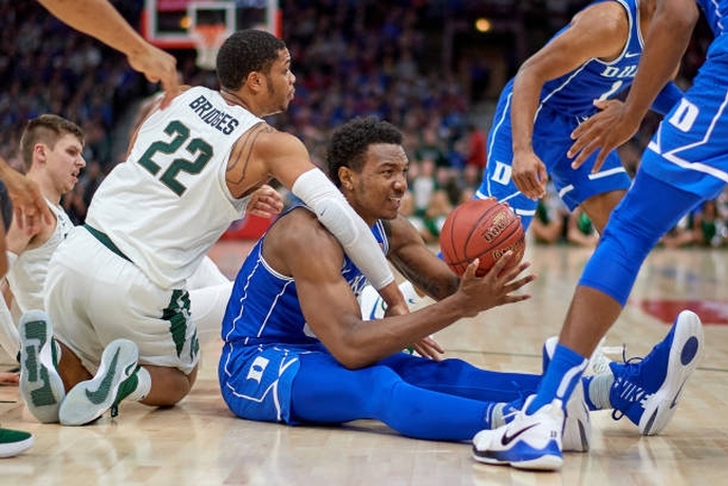 Months after the FBI revealed their initial findings from their investigation into corruption and bribery in college basketball, we may now be understanding just how wide the scope of corruption is in the sport.

According to a report from Pat Forde and Pete Thamel of Yahoo Sports, documents acquired by the FBI from former NBA agent Andy Miller, his former associate Christian Dawkins, and ASM Sports detail impermissible benefits and potential NCAA violations by at least 20 programs and over 25 players.

There’s potential impermissible benefits and preferential treatment for players and families of players at Duke, North Carolina, Texas, Kentucky, Michigan State, USC, Alabama and a host of other schools. The documents link some of the sport’s biggest current stars – Michigan State’s Miles Bridges, Alabama’s Collin Sexton and Duke’s Wendell Carter – to specific potential extra benefits for either the athletes or their family members. The amounts tied to players in the case range from basic meals to tens of thousands of dollars.

Along with Bridges, Sexton, and Carter, Texas guard Eric Davis ($1,500) and USC forwards Bennie Boatwright and Chimezie Metu ($2,000 each) are the other current players known to have received cash payments from ASM Sports. Former Louisville and current South Carolina guard Brian Bowen, the subject of the FBI's initial findings, also received at least $1,500 in plane tickets and $7,000 in benefits.

Michigan State head coach Tom Izzo and "Villanova coaches" are the coaches that are known to have met with Dawkins, according to the documents obtained by Yahoo.

It's unclear if any coaches knew of these payments to players. Xavier head coach Chris Mack is the only one who has released a statement to this point and denied having any contact with Miller or ASM Sports.

“I have no relationship with Andy Miller or any of his associates. He plays no role in the recruitment of potential student-athletes on Xavier’s behalf. Beyond that, our staff has never created a path for him to foster a relationship with any of our student-athletes while enrolled at Xavier. Any suggestion that I or anyone on my staff utilized Andy Miller to provide even the slightest of financial benefits to a Xavier student-athlete is grossly misinformed. We are prepared to cooperate with any and all investigations at any level.”

The NCAA also released the following statement in response to the story:

“These allegations, if true, point to systematic failures that must be fixed and fixed now if we want college sports in America. Simply put, people who engage in this kind of behavior have no place in college sports. They are an affront to all those who play by the rules. Following the Southern District of New York's indictments last year, the NCAA Board of Governors and I formed the independent Commission on College Basketball, chaired by Condoleezza Rice, to provide recommendations on how to clean up the sport. With these latest allegations, it's clear this work is more important now than ever. The Board and I are completely committed to making transformational changes to the game and ensuring all involved in college basketball do so with integrity. We also will continue to cooperate with the efforts of federal prosecutors to identify and punish the unscrupulous parties seeking to exploit the system through criminal acts.”

It's unclear if the current players mentioned in these documents will face any immediate punishment before the NCAA Tournament, which starts on March 13.