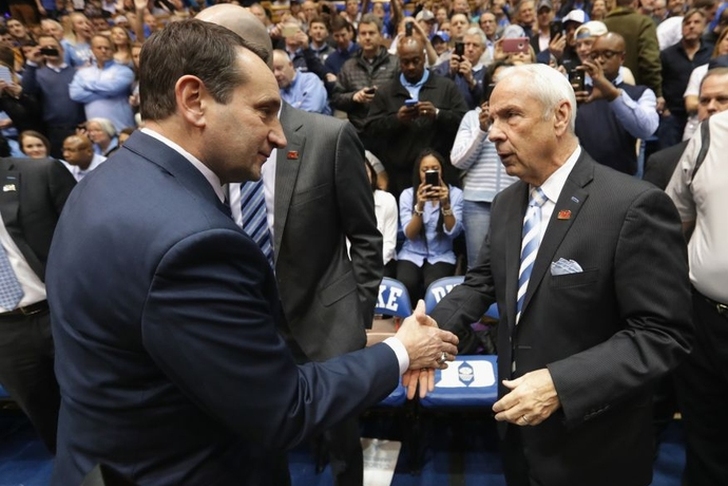 We're just over a month into the college basketball season, and while there haven't been many quality games this week, teams are gearing up for the start of conference play. Last week was full of upsets, creating plenty of questions for many teams around the country. We're going to be posting these every Friday throughout the course of the season to try and help answer those questions. Hit me up on Twitter or Facebook if you want to join the conversation! Now, let's get into it:

Say what you will about Rick Pitino (pretty much all of it warranted), but following someone who had that much on-court success is going to be a tough task for anyone - especially when you have to replace him roughly a month before the season. I think Louisville has reflected that as they didn't look sharp in their losses to Purdue and Seton Hall (or at any point this season, really), but he's doing as good as could be expected given the circumstances.

That said, this team has a lot of talent and they're deep. Once they hit conference play, he'll no longer be a "new" coach. He'll have enough games under his belt to where he should feel comfortable being in charge and will have a better handle on what he wants to do. Picking up a big win would go a long way in solidifying that, too.

It's a tough situation but we won't really know how good he is as a coach for another month or so.

Boring week of college basketball. Let's talk succession planning for head coaches. Who's next in line at UNC, Dook, Cuse, and others? - @Ppuro 31

There figure to be a number of these high-profile coaching changes coming with Mike Krzyzewski, Roy Williams, and Jim Boeheim all getting up there in age. In all three cases, the programs would like to hire someone within or with ties to the program.

We know Duke had planned for current assistant Jeff Capel - who is an excellent recruiter and has previous head coaching experience at both VCU and Oklahoma - to eventually take over for Coach K, which we saw when he served as the interim head coach for a stretch last season. However, the emergence of Arizona State makes Bobby Hurley (who led Duke to two national championships as a point guard) a fantastic candidate as well. Maybe it's recency bias but I'd lean more towards Hurley right now, though it will be one of those two guys either way.

Similarly, UNC has Hubert Davis as the assistant who is expected to take over whenever Ol' Roy steps away. He doesn't have any previous head coaching experience but is the program's best recruiter and has been groomed for the role. Many Tar Heel fans also want them to pursue Wichita State head coach Gregg Marshall (for obvious reasons) even though he has no ties to the program. It's Davis' job if he wants it.

Syracuse is a bit more tricky. Mike Hopkins had been the head-coach-in-waiting before he left for the Washington job this offseason, leaving many to point to assistant and former point guard Gerry McNamara as Boeheim's eventual replacement. Hopkins will still be considered - especially if he has success in Seattle - but it seems like he has had enough of the program. I'd bet the job goes to McNamara now.

NEXT READ: Rauf Report: Trae Young's Excellence, How To Fix Duke's Defense & More Takeaways From The Week Of College Basketball

@brauf33 What are your thoughts on the #cuse basketball team this season so far ?

Speaking of Syracuse, they feel like what they've been the past few years - a bubble team, though they're on the right side of that bubble. Tyus Battle (20.7 ppg) is the real deal and has All-ACC potential but I still need the rest of the roster to prove it on the court. The two-point win over Maryland was nice, yet the loss to Kansas showed that this group still has a ways to go. If they get consistent scoring from Frank Howard and Oshae Brissett in conference play, the Orange will be in good shape.

if ATL gets the 1st or 2nd pick overall, who do u draft

An NBA Draft question! The Hawks are in a position to simply pick the best player available no matter where they are. They're in a full-blown rebuild and don't have any real position set (no, I don't think Dennis Schroder will lead them places and while John Collins has been good, he hasn't been "we don't need to worry about the power forward position" good).

There's definitely a clear-cut top four in this draft class. I'd rank them Marvin Bagley III first, then Luka Doncic, then Deandre Ayton with Michael Porter Jr. fourth right now because of his back surgery. I think Atlanta can follow that board and go with the top guy left whenever they pick - but they should be thrilled if they can get any one of those four.

RELATED: Predicting The Top 10 Picks In The 2018 NBA Draft

Will Minnesota return to the Top 25 at some point this season?

Minnesota's tough. Yes, they'll be back in the top 25 at some point because of the bad teams they'll play in the Big Ten, but I don't view them as a top 25 team. Right now, their only notable win came when they were playing 5-on-3 against Alabama and suffered double-digit losses to both Nebraska and Arkansas - and only beat Drake by one in their last outing. Jordan Murphy (20.3 ppg, 13.0 rpg) is legit even though the rest of the team hasn't progressed as we expected.

Does Chris Mooney survive the season or not?

Will Richmond fire Chris Mooney before or after Feb. 1?

Mooney will make it past Feb. 1, but unless something crazy happens during A-10 play, I expect him to be gone shortly after the season ends. Richmond hasn't made the NCAA Tournament since 2011 and, currently at 2-8, are on pace to finish with their first losing record since the 2006-07 season.