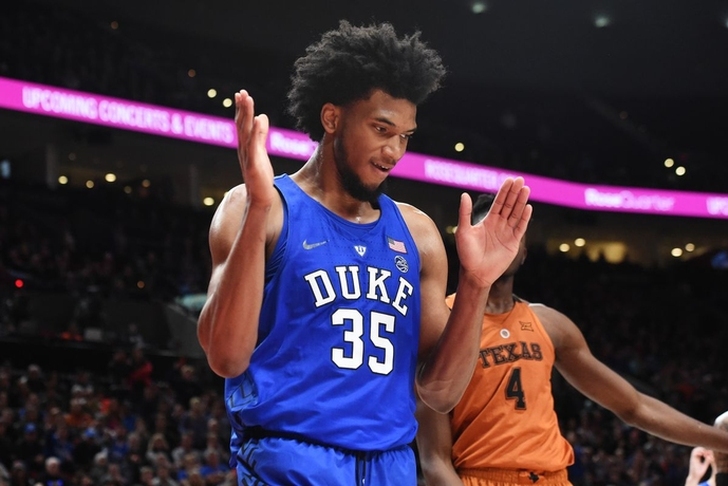 The 2018 NBA Draft is still six months away, but now that we've had a month to evaluate the top prospects in the college basketball, we can start to really project where they'll end up at the next level. Of course, the first quarter of the NBA season has also identified the teams that will likely be selecting at the top of the draft.

Right now, there are four prospects - Marvin Bagley III, Deandre Ayton, Michael Porter Jr., and Luka Doncic - that have separated themselves as top prospects and are the only ones in play (right now) for the No. 1 overall selection. Porter isn't playing for the rest of the season following back surgery while Doncic (who is the only guard of the group) is playing overseas, meaning casual fans will really only have access to Bagley and Ayton during the college basketball season. Both have been absolutely incredible this year and are appointment television.

However, there are a number of quality prospects in the next tier behind them that will round out the lottery. Who are the top 10 picks right now? Here are our early projections (draft order based on NBA standings as of Dec. 11):

The public perception around Bagley has cooled following Duke's loss to Boston College, but make no mistake about it - scouts absolutely love what he brings to the table as a 6-foot-11 forward. He's an elite rebounder with a polished offensive game and isn't afraid to bring the ball up the court. Bagley has shown some defensive deficiencies this year but is an incredibly fluid and elite athlete, meaning he has the ability to turn that into a strength with proper coaching. Chicago would love to build their frontcourt around him and Lauri Markkanen.

There is a real legitimate chance that Doncic goes No. 1 overall because of the numbers he's already putting up against professional players - numbers no European player his age has ever recorded before. His all-around game is sound and has great size and vision for the position. Doncic isn't anything more than a slightly above average athlete, yet he is the most skilled player in this class.

Ayton looked like he was carved out of stone and has the most NBA-ready body in the class. That strength, coupled with his 43.5-inch vertical, give him an extremely rare combination of size and athleticism that is required of the best big men in today's NBA. He also has solid touch on his mid-range jumper to go along with his elite play in the post and on the glass.

Porter was in line to be the No. 1 overall pick before Bagley reclassified to the 2017 class and before he got hurt, which will probably cause him to fall to No. 4 (no college tape/experience will hurt him) - and the Kings (or whoever ends up drafting here) will be ecstatic about it. He's a quality athlete who excels on the perimeter and around the basket with his smooth skill set.

By now, the Grizzlies have to know that they need scoring and more depth on the wing. Enter Knox, who is an extremely gifted scorer and can fill it up both from three and by attacking the rim. Memphis could go with a big here, but with their reluctance to part with Mike Conley or Marc Gasol, they'll likely choose to complement them with a wing - causing them to reach a bit for Knox in this scenario.

Bamba ending up in Phoenix is as good of a fit as there can possibly be in this draft. The Suns continue to be a mess defensively and need a starting-caliber center. Bamba is the defensive standout of this class as a game-changing shot-blocker that will hold down the middle where ever he goes. His athleticism will also allow him to play at the faster pace demanded in the NBA, which is even more crucial for a guard-oriented team like the Suns.

Much like Memphis, Charlotte needs more wing scoring, making Miles Bridges a great fit here. Bridges is a freak athlete who is excellent finishing around the rim and has shown a more consistent jump shot this season, though he hasn't shown the best feel for the game and has lacked aggressiveness at times. Still, those aren't major reasons for concern (yet) given how he played as a freshman.

The Clippers are just starting a rebuild and are in a position where they will end up taking the best player available regardless of position. That is Jackson in this scenario, who has a 7-foot-4 wingspan and is a great athlete, giving him a ton of defensive upside as a shot blocker. He's competitive on the glass, runs the floor well and is a good finisher, yet needs to play stronger and become a more consistent shooter. Jackson's versatility and ability to play either forward position - or even center in smaller lineups - make him even more valuable.

Orlando and Sexton feels like a marriage that will last where ever Orlando ends up picking in the top 10 (outside of the top four, of course) The Magic are desperate to move on from Elfrid Payton at point guard and Sexton is the best one in this class. He's not the biggest and is more of a scorer than playmaker, but is very explosive and extremely competitive. For a Magic team that needs more offensive production from their backcourt, Sexton makes a lot of sense.

If Cleveland ends up keeping this pick rather than trading it for a proven veteran, they'll take the best player available because they don't have any real pressing need, meaning they will go with Williams. The Texas A&M big man is a super athlete and an elite defensive prospect thanks to his shot-blocking ability. Williams is still raw offensively and relies mostly on his athleticism at this point in his career but has all of the physical tools.