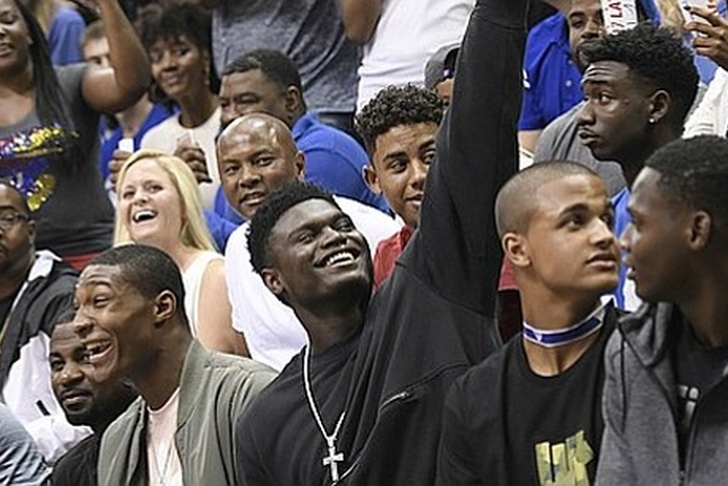 Five-star forward Zion Williamson, the top recruit in the 2018 class, made his official visit to Kansas this weekend for the Jayhawks' "Late Night in the Phog" event.

Several other recruits were also in attendance, but Williamson stole the show. Fans greeted him with “We Want Zion!” chants during the event, which drew a wave from a smiling Williamson.

Leading up to the event, there was some question about whether Williamson would make the trip.

The 6-foot-7, 230-pounder postponed a visit to Kentucky the previous weekend due to a death in the family, and last week, we reported that Adidas reps were trying to influence his recruitment and steer him to Kansas. The Adidas reps involved are the same ones who were arrested in the FBI's college basketball investigation.

Williamson's stepfather, Lee Anderson, denied having any contact with Adidas. “If anyone approached the family without Zion’s best interests in mind we would simply walk away,” Anderson told WSPA News in South Carolina, adding that “no one outside of the immediate family will have any say or sway on Zion’s decision on where he’ll go to school.”

Kansas and Kentucky are the two clear favorites in Williamson's recruitment, but a number of other schools - including Clemson, Duke, North Carolina, South Carolina, and UCLA - are also believed to be in the mix for him.

Fellow five-star prospect Immanuel Quickley has been one of the biggest factors in recruiting him to Kentucky. Williamson and Quickley are good friends and openly discussed wanting to play together in college, but stopped short of saying they were a package deal. Quickley committed to Kentucky on Sept. 22.

The 6-foot-7, 230-pounder has official visits scheduled to Duke on Oct. 20 and UCLA on Oct. 27. He made unofficial visits to both Clemson and South Carolina this summer and could make his official visit to Kentucky on Oct. 13 for their Midnight Madness event.

Williamson has become a YouTube sensation for his high-flying dunks while playing for SC Supreme and his high school, Spartanburg Day School. Check out his highlight film below. Download the Chat Sports app for iPhone or Android for more on this story as it breaks.