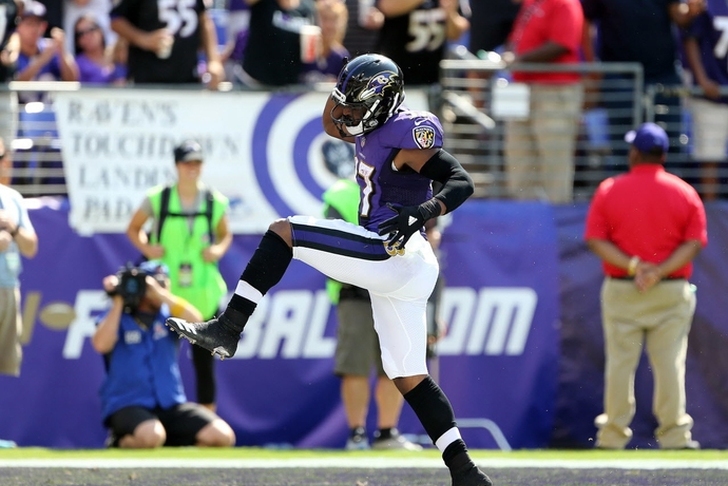 Many people don't like to brag but when it comes to fantasy football I may be a professional bragger. As of my Waiver Wire Week 2 picks, I think I deserve a pat on the back or a twitter follow. Actually, I'd rather have a twitter follow. Let's go with that one.

If you want your fantasy football questions such as waiver wire or start/sit questions asked LIVE on air at 6 pm ET on Tuesday then tweet me  @MitchellRenz365 using the hashtag #AskMitchellLive.

You can now listen to Chat Sports | NFL Daily Podcast which can be found on iTunes and Google Play.

In order to be in this article, the player must have an owned percentage less than 30%. The order of the list determines the level of importance in adding them. So 1 is the most important pickup all the way down to the least important pickup. FAAB (Free Agent Acquisition Budget) is for people who have to bid on players in order to pick them up. The FAAB is based on leagues with a $100 budget.

Javorius Allen
RB | Baltimore Ravens
FAAB: $12
Ja-Ja Javorius is the first man on my waiver wire Week 3 article. Even though he wasn't the starter on Ravens in Week 2 he looked like the most capable running back on the roster. Allen had 14 carries for 66 yards on the ground and added five catches for 35 yards and one touchdown. Allen is clearly the best pass-catching running back on the roster and I think an overall better fit for the Ravens offense.

Samaje Perine
RB | Washington Redskins
FAAB: $10
Rob Kelley was injured in Week 2 and then rookie running back Samaje Perine was given 21 carries. He managed only 67 rushing yards but anytime a running back is given 22 touches in a game that is something I am interested in. I expect the Redskins offense to be able to put up points which should lead to scoring opportunities for Oklahoma's all-time leading rusher.

Chris Carson
RB | Seattle Seahawks
FAAB: $10
The only positive aspect on the offensive side of the ball for Seahawks was Chris Carson. Carson had 20 carries for 93 yards and looks to have a grip on this starting running back situation in Seattle. I'm hesitant to put him higher because the 49ers don't have a good run defense and it worries me how bad the Seahawks have looked on offense.

Nelson Agholor
WR | Philadelphia Eagles
FAAB: $7
Agholor was quiet in Week 2 with only one catch for nine yards. He did, however, score a touchdown. Agholor had a difficult matchup in Week 2 in against the Chiefs in Kansas City. This is the second week where he found the end zone and more importantly, Wentz is looking for Agholor when it matters. He will face a difficult challenge against the Giants in Week 3 but the Giants will be playing on a shorter week.

J.J. Nelson
WR | Arizona Cardinals
FAAB: $7
Carson Palmer and Bruce Arians like to throw the ball downfield. Nelson can run and man is this guy fast. He torched the Colts defense for five catches, 120 yards and one touchdown. Now this performance was against the Colts who may have the worst defense in the NFL. With the question marks surrounding John Brown, Nelson could be the deep threat and player that stretches the field for the Cardinals.

Marquis Lee
WR | Jacksonville Jaguars
FAAB: $3
So I write this article to help you out. Lee's ownership is 30.2%, so technically he shouldn't be in the article.  I'm just going to round down and say he makes the cut. Lee saw 12 targets in Week 2. Now most of those targets were in typical Blake Bortles garbage time but they were still targets. I think he is the most talented wide receiver on the Jaguars which deserves a look on the waiver wire.

Allen Hurns
WR | Jacksonville Jaguars
FAAB: $3
Hurns looks to be the red zone target for the Jaguars. Hurns saw seven targets and brought in six of them for 82 yards and one touchdown. Hurns also scored most of his fantasy points in garbage time but in fantasy, I don't care how I get my points as long as I get them.

Alvin Kamara
RB | New Orleans Saints
FAAB: $2
Kamara played in 52 percent of the Saints snaps in Week 1 and he was a major part of the passing game in Week 2. Kamara had three catches for 51 yards but he saw seven targets. If I can find a running back who will see seven targets in a Drew Brees led offense then I am interested.

Eric Ebron
TE | Detroit Lions
FAAB: $2
Ebron had a nice bounce-back game on Monday Night Football where he saw five targets brought in all five of them for 42 yards and a touchdown. He had a bad week one due to the fact that he played the Cardinals who are the best team in the NFL at stopping tight ends the last two seasons.

Trevor Siemian
QB | Denver Broncos
FAAB: $2
Totally in control. Cooler than the other side of the pillow - RIP Stuart Scott. This describes Siemian in Week 2. He was in total control the entire game against the Cowboys. The Broncos embarrassed the Cowboys winning 42 - 17. To read a more in-depth opinion about Siemian read here: What We Learned from the Broncos 42 -17 Win Over the Cowboys.

Jermaine Kearse
WR | New York Jets
FAAB: $1
Four catches for 64 yards and two touchdowns for Kearse in Week 2. He seems to be a favorite target for McCown which is positive since the Jets will be losing most if not all games. As I stated in my What We Learned from the Raiders 45 - 20 Win Over the Jets, the Jets may lose every game by a large margin which could leave plenty of time for Kearse to rack up some garbage points.

Kendall Wright
WR | Chicago Bears
FAAB: $1
Wright saw 10 targets and brought in seven catches for 69 yards. Wright is the main wide receiver for the Bears. Last week's top waiver wire add is the best pass catcher on the Bears (Tarik Cohen). Wright is a better add in PPR leagues as I expect him to be heavily targeted since the Bears will be in plenty of negative game scripts.

Week 2 was a fun week and fingers crossed Week 3 is as entertaining.