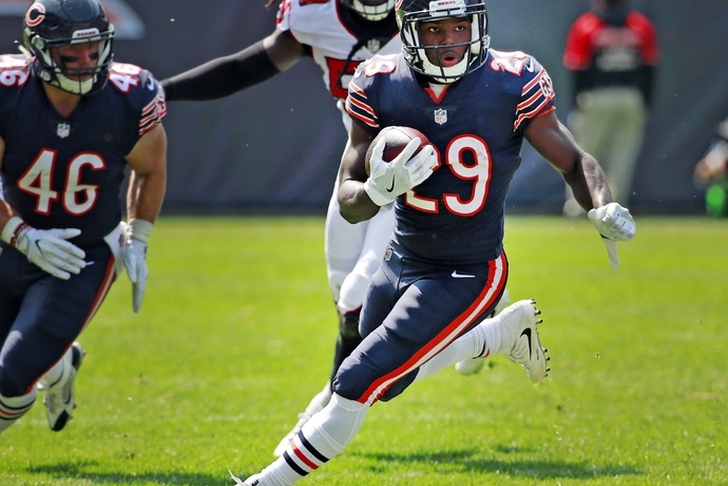 Time to search that Waiver Wire and find some of those gems that were missed in fantasy drafts. There were some major injuries that will impact fantasy teams this week with David Johnson, Allen Robinson, and Kevin White going down. Just kidding about White.  If you are left wondering scratching your head (hopefully the one above your shoulders) on who to pick up. Don't worry I have you covered.

If you want your fantasy football questions or waiver wire questions asked LIVE on air at 6 pm ET on Tuesday then tweet me  @MitchellRenz365 using the hashtag #AskMitchellLive.

In order to be in this article, the player must have an owned percentage less than 30%. The order of the list determines the level of importance in adding them. So 1 is the most important pickup all the way down to the least important pickup. FAAB (Free Agent Acquisition Budget) is for people who have to bid on players in order to pick them up. The FAAB is based on leagues with a $100 budget.

The Bears will be losing most games this season which means Cohen should be on the field more. Personally, I thought the Bears looked like a better offense with him on the field. Cohen rushed for 66 yards on five carries with eight catches for 47 yards and one touchdown. This may be BOLD to say but Cohen will outscore Jordan Howard in PPR leagues this season.

Kupp is the go-to guy for quarterback Jared Goff. He had four catches on six targets for 76 yards and a touchdown. He was Goff's first read and looks to be the leading candidate to lead the Rams in receptions this season. He might also lead all rookie in receptions.

Two touchdowns in his rookie debut for Golladay. The hype has grown around Golladay all offseason and he performed well Week 1 against a tough Cardinals defense.

Happy to see Agholor have a good Week 1 since his career up to this point has been disappointing. The offseason news surrounding him has been positive and he was the reason they let Jordan Matthews go. He was targeted a team high eight times and looked like he had much more confidence on the field.

"Buck" Allen is the next man up for the Ravens who have suffered a ton of injuries this offseason/preseason/regular season. They have had some bad luck thus far. Not crazy about Allen's talent but anytime a running back gets 21 carries I am interested.

David Johnson is out 2-3 months which means Williams is the new "starter". I still believe the Cardinals go with a running back by committee approach and possibly resign Chris Johnson which means his fantasy ceiling isn't too high. Still though finding running backs on top of depth charts isn't easy so he is worth a pickup.

Allen Robinson is done for the season with an ACL tear. Hurns two years ago was a red zone option for the Jaguars and may be leaned on to shoulder a heavy target load now with them dealing with some injuries at the wide receiver position. By heavy target load, I mean six or seven a game.

Wright managed only four targets in Week 1 which isn't anything to get excited about but I expect Wright to lead the Bears receivers in targets this season.

Bradford looked good on Monday Night Football against the Saints. The Vikings offense, in general, looked productive which gives me hope for him this season. The real question is how much of this game is due to a poor Saints defense?

Raise your hand if you projected Alex Smith to lead the NFL in passing yards after Week 1. There are only two types of people who raised their hand with that question. Chiefs fans or liars. Possibly both. We shouldn't overreact on Smith I still would rather have quarterbacks like Kirk Cousins and Eli Manning.

In a game where the Seahawks offense was about as bad as possible, Richardson managed alright stats. His four catches on seven targets is a positive sign. He has the talent and it looks like he has the opportunity, not a bad guy to add or at least keep an eye on.

In his first NFL game, I thought Kizer looked good. He looked like 2015 Kizer and not 2016 Kizer to me. The Steelers have a tough defense and division games are always more difficult (ask Andy Dalton.) I would really only pick up Kizer if you drafted Andrew Luck and need someone for Week 2 or are in a two quarterback league.