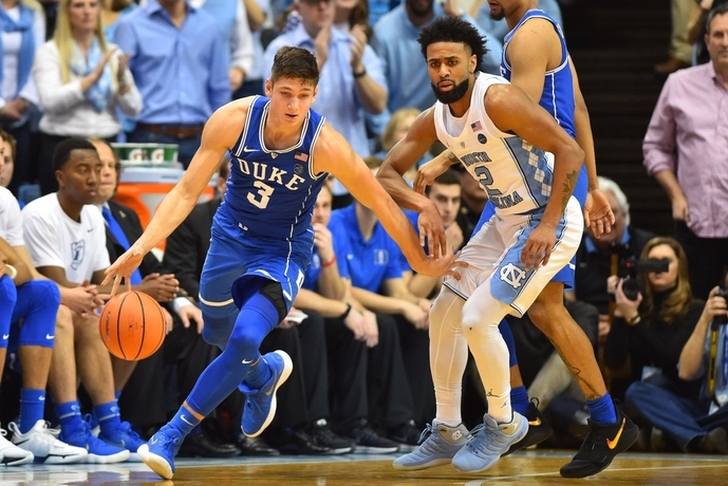 The Duke Blue Devils will host the North Carolina Tar Heels in the final regular-season meeting between the two sides, but this isn't the typical UNC-Duke matchup. While both teams are ranked in the top 10, both are coming off of last-second losses suffered earlier this week. Neither team is accustomed to losing back-to-back games, yet one of these storied programs will be going into the ACC Tournament on a two-game losing streak. Which team will win and avoid that fate? Here's our full preview and prediction:

What they're saying about the Duke Blue Devils:
Here Are The Only 5 College Basketball Teams With A Realistic Shot To Win The National Championship (Chat Sports)
Krzyzewski speaks about senior Grayson Allen (News & Observer)
What does UNC's Roy Williams think about Duke's Cameron Crazies? (News & Observer

Keys to the game:
Who wins the battle inside?

In the first half of the first meeting between these two teams, Bagley and Carter were dominating the glass inside for Duke, and the result was a double-digit lead for the Blue Devils. However, things totally flipped in the second half as UNC held a 28-17 rebounding advantage after the break (15 of which were offensive rebounds). That spearheaded a 16-2 run that turned the tide in UNC's favor, giving them a lead they would never relinquish.

Shortly after the game, Duke revealed that Bagley suffered a knee strain in the first half and it's clear that played a role in Duke's struggles on the inside in the second half.

It's also clear that, in a game like this with two good rebounding teams going at it, whoever controls the glass will control the game. The battle of X-factors will be something key to watch in this game. UNC is 17-2 when Williams scores in double-digits compared to just 5-6 when he does not. Trent has a similar impact for Duke, as the Blue Devils are 18-4 when he has at least 10 points.

Both players can be deadly three-point shooters and are important secondary scoring options for their respective teams, so it shouldn't be a surprise that when they play well, their respective team has success. Whoever has the better game tonight will give their team a major leg up.

Prediction: Duke wins 86-80
Want to know the last time Carolina swept Duke? 2009. And the Blue Devils have only swept the Tar Heels once (2015) since then. Sweeps don't happen very much in this series. Because of that, along with the fact that Duke is playing at home with a healthy Marvin Bagley, I see the Blue Devils winning.