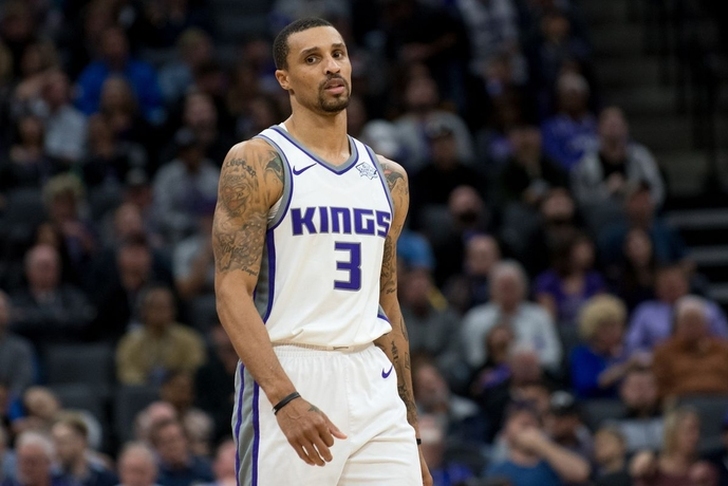 The Cleveland Cavaliers have been more engaged in trade talks that perhaps any other team in the league, leading us to believe that the Cavs could pull off a flurry of moves before the Feb. 8 deadline. They're looking to improve their roster to keep pace and hopefully put themselves ahead of the other title contenders and figure to be going after both DeAndre Jordan and Lou Williams now that the Los Angeles Clippers have placed both back on the trade block. However, there are plenty of others potential deals Cleveland is exploring. Here are the latest Cavs trade rumors you need to know:

Latest on George Hill trade
The Cavs seemingly had a deal in place to acquire George Hill from the Sacramento Kings last week, but talks between the two sides have seemingly stalled. Why? Hill and the Cavs are concerned that LeBron James will leave the team in free agency this summer and Hill won't agree to a potential buyout, according to ESPN's Brian Windhorst.

“The George Hill and Cavs deal is stalled because Hill is unwilling to agree to a preliminary buyout for next year in the event that LeBron were to leave in the offseason,” Windhorst recently said on ESPN Radio.

Clippers planning to pursue LeBron James
One team that is planning to pursue James in free agency is the Clippers, as their decision to trade Blake Griffin to the Detroit Pistons - and plans to part with Jordan and Williams - are part of a bigger scheme to land LeBron, according to Marc Stein of the New York Times.

The Clippers clearly believe they can make it onto LeBron James' free-agent short list come July and, according to league sources, will indeed move DeAndre Jordan and Lou Williams before the Feb. 8 trade deadline if they can find workable deals to help them in that quest.

James, who is averaging 26.8 points, 8.8 assists, and 7.9 rebounds per game this season, reportedly first had some interest in the Clippers when they hired Jerry West to a front office role this offseason.

Will Channing Frye be traded?
Frye was included, along with guard Iman Shumpert, in the original framework of the proposed George Hill trade, and another reason why that deal fell apart was head coach Tyronn Lue's desire to keep Frye. Frye wants to stay and help the Cavs win another title but understands if he is traded, according to ESPN's Dave McMenamin.

One trade scenario that almost came to fruition, as reported by ESPN and other outlets, would have sent Frye and Iman Shumpert to the Sacramento Kings for guard George Hill. Cavs coach Tyronn Lue was against including Frye in the Hill trade, league sources told ESPN, because he deems the stretch-5 too valuable to include in a move that does not result in a clear-cut improvement to Cleveland's championship chances.

"I've been traded before," he said. "What am I going to do? Listen, my checks transfer to Sacramento. I think at the end of the day, we have pretty good communication, and business is business. I want to be here to win. My main goal here, the only goal that everybody should have here, is to win a chip. So your personal feelings of what you think is best for you doesn't matter. At all. If you're not here to win a championship, you need to get the f--- out of here."