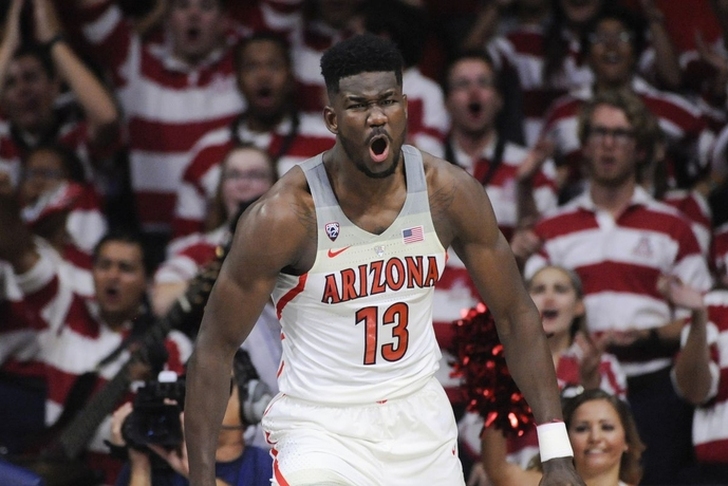 The 2018 NBA Draft class may not be as deep as the stacked 2017 class, but there are a number of star players at the top that all look like franchise players. Oklahoma freshman point guard Trae Young is setting the college basketball world on fire, leading the country in points and assists, and has drawn comparisons to Stephen Curry. Then there's a pair of big men in Arizona's Deandre Ayton and Duke's Marvin Bagley III who are both elite talents. And there's Real Madrid's Luka Doncic, who is doing things in Europe no player his age has ever done before.

Now that we're past the halfway point of the NBA season and are approaching the All-Star break, we are starting to get a sense of which teams will be in great position to land those future superstars. So, without further ado, here is Version 1.0 our 2018 Mock NBA Draft with the order based on the current NBA standings: 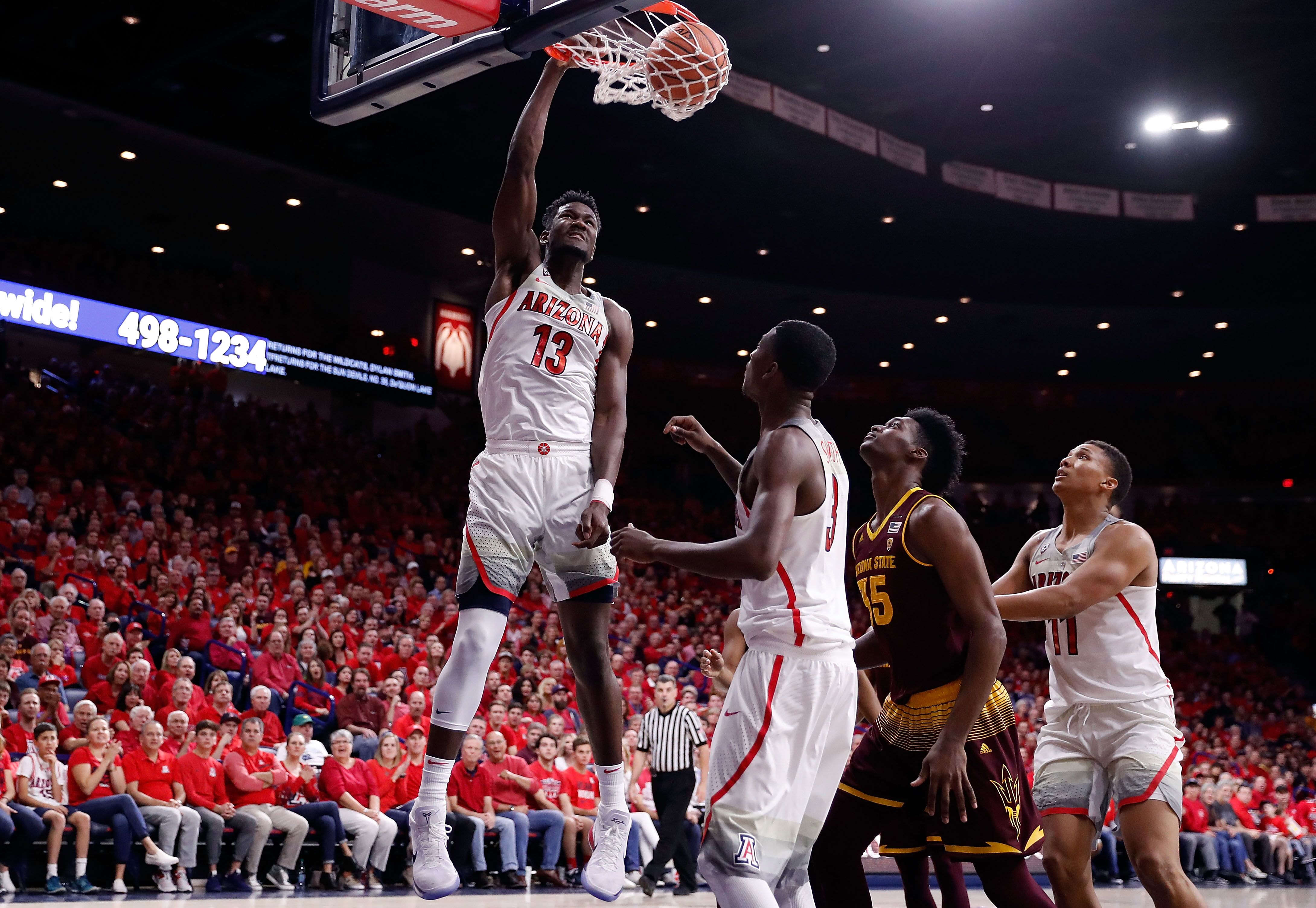 The best true center prospect we've seen in some time, Ayton is a highly skilled big man who still has plenty of upside. He's a physical beast that is dominant in the post and has range stretching out to the three-point line. I rank Bagley as the better player, but given Ayton's physical stature, he may have the highest ceiling of anyone in this class. Because of that, the Magic - who need talent and a true big man to be next to Jonathan Isaac and Aaron Gordon in the frontcourt - go with Ayton over Bagley.

Atlanta is in a position to take the best player available regardless of position, and while they'll also seriously consider Doncic, I think they'll go with Bagley's upside. At 6-11, Bagley is a silky smooth athlete who can bring the ball up the court and shoot from the outside, but he's lethal in the post and a terror on the glass thanks to his quick second and third jumps. There are some questions about his skinny frame but he projects to be the perfect four man - or stretch five - in today's NBA.

Doncic has a legitimate case to be the No. 1 overall pick. His all-around game made him the youngest player to ever record a double-double in ACB history and has great size and vision for the position. There are some questions about his athleticism but he's the most skilled player of this group right now. 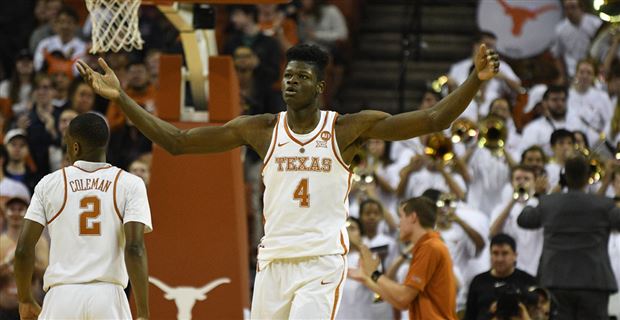 Dallas would be tempted to take Trae Young if they didn't take Dennis Smith Jr. last year, and given how spectacularly the Nerlens Noel experiment failed, they'll go for the elite shot-blocker with offensive upside in Bamba. Phoenix needs a point guard in the post-Eric Bledsoe era in Phoenix and Young is perfect for the up-tempo system the Suns want to play due to his incredible quickness, vision, and ability to create shots for himself. There would be some major defensive questions about having him and Devin Booker in the same backcourt, but the offensive upside is tremendous.

An excellent addition to any NBA team, Jackson has a 7-foot-4 wingspan and is a great athlete, giving him a ton of defensive upside as a shot blocker who can defend every position on the court. He's competitive on the glass, runs the floor well and is a good finisher with a growing offensive skill set, though he needs to improve his shooting. Pairing him with Lauri Markkanen in the frontcourt would be an ideal combination for the Bulls. Porter was in the running for the No. 1 pick in the draft before he suffered a hip injury that required back surgery and ended his season before it really started. He's a good, fluid athlete who excels on the perimeter and around the basket with his smooth skill set - and would be the perfect prospect for the Cavs to build around should LeBron James leave.

There's a reason why Knox was one of the top prospects in the country this year. Despite a lack of aggression and the need to get stronger, Knox can fill it up with the best of them. The Grizzlies need more scoring, and Knox might be the best pure scorer in this class. Sexton could easily go higher than this, but I think he'll fall a bit because of his size. Still, he's a dynamic athlete who is exciting to watch because of his quickness, vision, finishing ability and defensive quality. He's also perhaps the most competitive player in this class. Even though Philadelphia drafted Markelle Fultz last year, they believe he has the size to play in the backcourt alongside another point guard.

The Hornets need to figure out which direction they're going with their future, and without one right now (and a seeming unwillingness to trade Kemba Walker), they'll go with the best player available in Carter. He is big and strong enough to play center, yet is also athletic enough and has enough touch on his jumper to play power forward. Fundamentally sound, he can do everything he wants on the court. If he didn't play alongside Bagley at Duke, we'd be talking about Carter as a potential top-five pick.

Though he plays a lot of power forward for the Wildcats, Bridges' NBA upside is as a defender. He's very quick for someone who is 6-foot-7, and with a wingspan over seven feet, he is an impact player on that end of the floor. Bridges is the ultimate 3-and-D prospect.

The preseason favorite to win National Player of the Year, Bridges was going to be a lottery pick in the 2017 draft before opting to return to school. He hasn't really helped himself with the gamble, but he is a freak athlete who is excellent finishing around the rim and has shown somewhat of an improved jumper. The Knicks need another long-term solution on the wing, which Bridges would provide.

Like Bridges, Williams is a super athlete who may have been a first-round pick if he stayed in the 2017 draft but opted to return to school to work on his consistency. That has also been a failure as he has struggled to find his place in Texas A&M's big lineup, but his game is perfect for the modern NBA. He is an elite athlete, rebounder, and shot blocker who will best utilize those skills in the wide-open NBA game. For a Clippers team that just parted with Blake Griffin and is expected to do so with DeAndre Jordan as well, Williams would be a great replacement.

The Clippers also need a point guard of the future, and Duval is the best one available right now with a good deal of upside. He is an elite athlete with outstanding quickness, vision, and a high basketball IQ, but his skill set is still developing. He has gotten by in his career due to his superior athleticism and needs to improve his shooting and finishing ability.

Philly can gamble a bit with this pick since it's their second pick in the top 15, and while Vanderbilt has only played in a handful of games this season, he's a "jack-of-all-trades" kind of player that would be a valuable asset for them off the bench.

Brown has great size for a wing player and can do a little bit of everything on the court, especially as a smart passer and defender. However, he's just an average athlete and needs to improve his consistency, yet for a Nuggets team that has been looking for a long-term answer and small forward, he's a smart pick.

Gilgeous-Alexander has been the most consistent player for Kentucky this season, and his size and vision give him good upside as an NBA point guard. The Pacers need a point guard and have an undersized shooting guard in Victor Oladipo, making Gilgeous-Alexander a good fit.

Another international prospect who needs to get stronger, Muza has a high basketball IQ and is an aggressive scorer who can fill it up from anywhere on the court. New Orleans needs more wing scoring, making this another good fit.

Robinson is not playing this season due to a weird series of events that ultimately led to him leaving Western Kentucky for a third and final time to spend the year preparing for the NBA Draft. A freak athlete and shot-blocker, Robinson is still very raw at this point in his career - but the upside is obvious. For a team that needs a long-term replacement for Marcin Gortat, the Wizards could be the team that gambles on Robinson.

Damian Lillard met with Blazers owner Paul Allen earlier this month to discuss the direction the team, and they decided they need more wing scoring and shooting. Enter Hutchinson, who's ready to contribute right away as a scorer and shooter thanks to him being an experienced senior.

Walker could very easily find his way into the back end of the lottery, as he has all of the physical tools and athleticism to be a star in the NBA. However, he needs the ball in hands to be effective and can improve his consistency and shooting. He'd be a quality pick at this point in the draft.

Walker's teammate, Brown is small for a shooting guard at 6-foot-3 but makes up for it with a 6-foot-9 wingspan and elite athleticism. He's a very versatile offensive player who would give the Suns an asset for their bench.

The best name in the 2018 draft, Milton has great size and all-around game for a point guard prospect. Minnesota really lacks size at the point guard position and the 6-foot-6 Milton would help fix that.

Simons is the No. 7 overall prospect in the 2018 recruiting class and is contemplating making the jump straight to the NBA since he's in prep school this year. For one of the league's worst teams in Atlanta, they can afford to gamble on a prospect like Simons this late in the first round.

Cleveland may also like to gamble on Simons, but they instead take a homegrown player in Bates-Diop, who is the favorite to win Big Ten Player of the Year. His size, length, and versatility give him a lot of defensive upside at the next level, as does his scoring ability. The Cavs will be hoping they can turn him into a 3-and-D guy at the next level.

Brunson isn't a super athlete but is an extremely smart, skilled player. Essentially, he's the perfect Spur. San Antonio needs to plan for the post-Tony Parker era and Brunson could fit the mold.

Diallo was eligible for the 2017 draft despite not playing a single game at Kentucky because he enrolled early after a semester of prep school, and he reportedly had a draft promise from the Nets, who loved his athleticism. That hasn't changed, and if he's still on the board here, they'll likely look to take him.

Metu is an intriguing athlete for NBA teams due to his quickness, size, and athleticism, though is still raw offensively. I'll be surprised if Boston doesn't trade this pick, but if they keep it, they need more frontcourt help.

If Atlanta gambles on Simons earlier in the draft - or even if they don't - they could use something resembling a sure thing to help their young roster. They also need scoring and shooting, both of which we know Allen (an underrated athlete) will be able to provide.

The Warriors signed backup point guard Shaun Livingston to a three-year deal last offseason, but he's a perfect trade candidate for them this summer if they want to save some on the luxury tax. Enter Shamet, who I think is a shorter version of Livingston (and a better shooter). Both are smart, smooth, have good vision, and are effective scorers when they pick their spots.