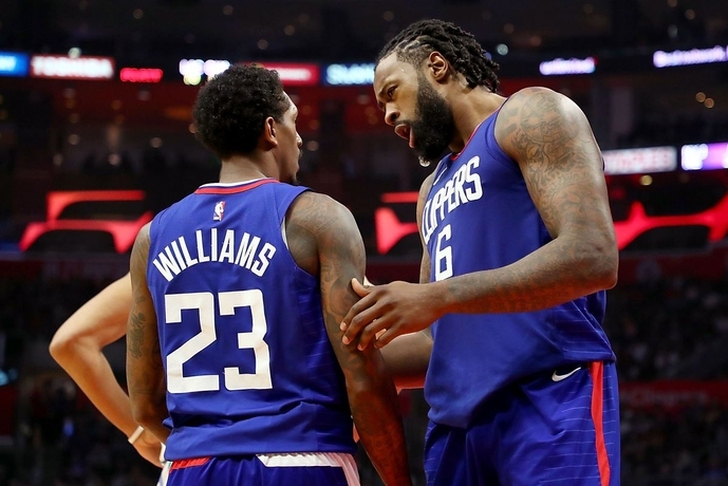 The NBA season saw its first major trade on Monday when the Los Angeles Clippers shockingly sent Blake Griffin to the Detroit Pistons for three players and two draft picks. With the trade deadline just over a week away on Feb. 8, many more deals are expected to take place in the coming days - and both the Clippers and Pistons are continuing to remain active on the trade market. Here are all the latest NBA trade rumors you need to know:

Now, following the Griffin trade, Los Angeles is again fielding offers for both players, according to ESPN's Adrian Wojnarowski.

Sources: Clippers will continue to pursue packages of young players and picks in talks for DeAndre Jordan and Lou Williams.

Clippers will continue to discuss contracts extensions at the right price, while engaging teams in trade talks on DeAndre Jordan and Lou Williams. They'll try to do a hard thing in the NBA: Rebuild on the fly with younger players/picks, without gutting roster.

The Cleveland Cavaliers had been most actively pursuing a trade for Jordan and will likely try to revive talks before the deadline.

Pistons hoping to trade for Rodney Hood
Landing Griffin was a big get for the Pistons, but they're still looking to re-tool their roster. According to Kevin O'Connor of The Ringer, Detroit is also trying to acquire Rodney Hood, who the Utah Jazz have made available for trade.

The Pistons might not be done making moves. Multiple sources say that they are after Jazz guard Rodney Hood and could send out forward Stanley Johnson. Hood is another injury-prone player, but these are the types of calculated risks Van Gundy needs to take to save his job. Griffin obviously offers higher upside than both Bradley and Harris, but his arrival suggests short-term rather than long-term planning.

Kings shopping Skal Labissiere
The Sacramento Kings, who are currently in last place in the Western Conference, are shopping 2016 first-round pick Skal Labissiere, according to ESPN's Brian Windhorst.

“I think they want a first-round pick for Skal." Windhorst told The Hoopshype Podcast. "Even though they aren’t quite the same type of player, I think they’re excited about Harry Giles’ future, so they’re willing to move off one of their bigs if they can get a first-rounder. As I said, there are no first-round picks available that I know of, so I don’t see that happening – at least not right now.”

The Dallas Mavericks are reportedly interested in Labissiere but will not give up a first-round pick for him. Labissiere is averaging 7.9 points and 4.5 rebounds in 18.0 minutes per game this season.