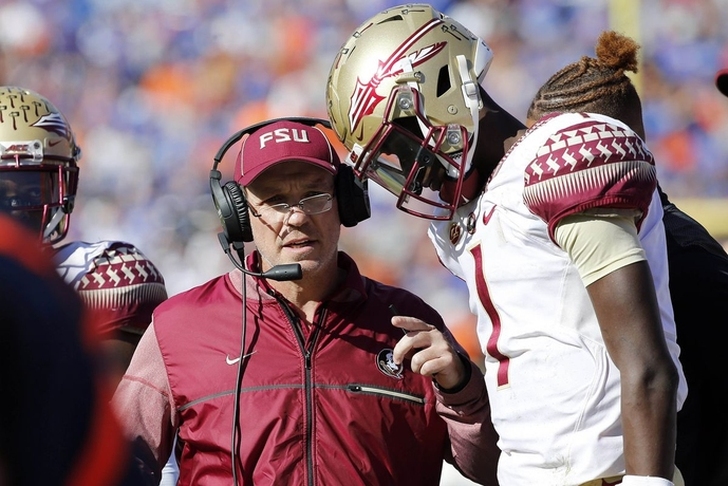 The Texas A&M Aggies fired head coach Kevin Sumlin earlier today, and they already have a deal with his replacement.

According to Randy McIlvoy of KPRC-TV in Houston, Texas A&M will hire Florida State head coach Jimbo Fisher once the Seminoles' season ends on Saturday.

Sources w/knowledge of TAMU search process tell me Jimbo-Fisher has a deal to be next Head Coach @AggieFootball .Fisher will coach 1 final game at FSU but not Bowl game should they become eligible. I'm told his TAMU contract will be at least 5 yrs/7.5 million per year. @KPRC2

Florida State will host UL-Monroe on Saturday as a makeup for the game that was postponed due to Hurricane Irma earlier this season. The game was originally canceled, but the Seminoles need the win to become bowl eligible at 5-6, so the game was rescheduled.

According to Brent Zwerneman of the Houston Chronicle, the Aggies had been plotting to replace Sumlin with Fisher ever since their season-opening loss to UCLA.

In the days after Texas A&M blew a 34-point lead in the Aggies' season opener at UCLA, a longtime A&M insider told the Chronicle, "Remember the name Jimbo Fisher."

In the couple of months since, the insider and eventually others have not wavered in their belief that the sought-after Florida State coach will succeed Kevin Sumlin at A&M.

Fisher has spurned interest from LSU each of the last two seasons but has a good relationship with Texas A&M athletics director Scott Woodward, who held the position at LSU when Fisher was an assistant there.

That relationship, plus the availability of better medical treatment for his youngest son, who has Fanconi anemia (a life-threatening medical condition) played major factors in Fisher's decision. Houston's medical center is considered to be one of the best in the world.

Fisher is 83–23 in eight seasons as FSU's head coach, winning at least 10 games for five consecutive years before this season. He also led the Seminoles to three straight ACC titles (2012-14) and the 2013 national championship.