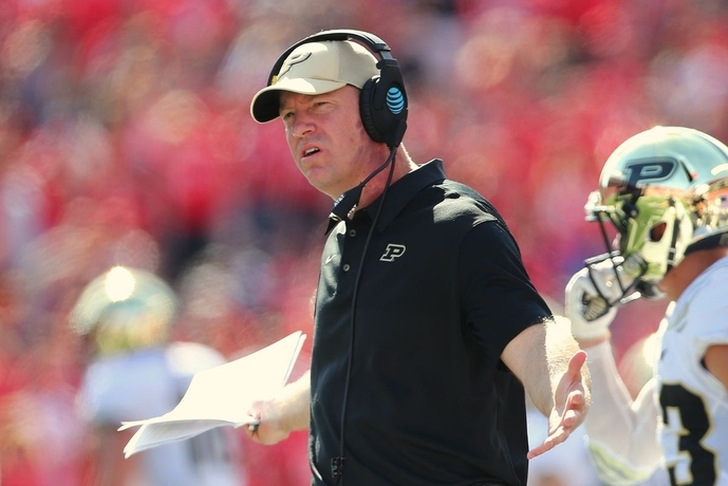 The Tennessee Volunteers were preparing to hire Purdue head coach Jeff Brohm, according to Jimmy Hyams of Sports Radio WNML.

Tennessee will soon announce the hiring of Purdue coach Jeff Brohm after going 6-6 this year. Brohm was 30-10 at Western Kentucky. Buyout is $5 million, drops to $4 million Dec 5. Still owes Purdue about $750k for leaving WKY.

However, Tennessee's negotiations with Brohm have stalled due to a contract disagreement, according to OutkickTheCoverage.com's Clay Travis.

I am told that UT AD John Currie made an offer to Jeff Brohm that Brohm accepted. Currie then asked the chancellor to approve the offer — buyout included — and chancellor said no. So Currie went back to Brohm with lesser offer and Brohm said no. So here we are.

The Tennessee Volunteers were preparing to hire Purdue head coach Jeff Brohm, according to Jimmy Hyams of Sports Radio WNML.

Tennessee reportedly turned their attention to Brohm after being turned down by Oklahoma State head coach Mike Gundy yesterday.

Brohm did wonders at Western Kentucky, leading them to back to back double-digit win seasons and bowl games before getting the Purdue job last offseason. In his first year with the program, Brohm has guided the Boilermakers to a bowl game for the first time since 2012.

Two-star safety Cory Trice, a Purdue commit, posted on Twitter a picture of Brohm visiting him at school this morning and says that Brohm told him he's not leaving the Boilermakers for the Vols.

Earlier this week, the Vols went through more uncertainty regarding their head coaching vacancy after going through the hiring - then un-hiring - fiasco with Ohio State defensive coordinator Greg Schiano.

Brohm is 36-16 in his four years as a head coach, reaching a bowl game every season.