These Are The Top 29 Most Valuable NFL Franchises 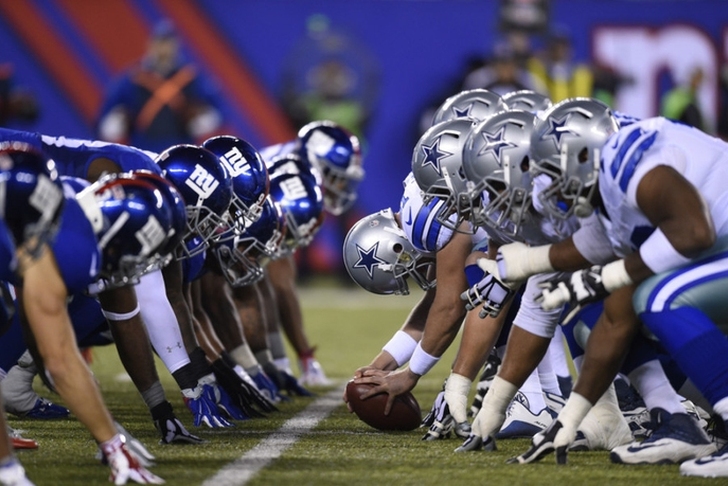 The NFL is the biggest, richest and most powerful sports business in the world, with the TV contracts that other leagues can only dream of. As a result, it's no surprise that on Forbes' list of the 50 most valuable sports franchises in the world, half are NFL teams. It's once again headlined by the Dallas Cowboys, who top the list.

There was a big jump in value for NFL franchises. Last year, being worth $2 billion would have secured a Top 10 spot. This year, it's not enough to make the top 20. The NFL remains the king of sports franchises, as shown by the league tanking 29 of the top 50 spots. Only a few teams missed out on of the top 50 of Forbes' list: the Cincinnati Bengals, Buffalo Bills and the Detroit Lions. Here are all 29 NFL teams that made the list:

29. New Orleans Saints - $1.75 billion
The Saints dropped down this list, checking in at 23rd last year. That comes despite a 16 percent jump in value. They are tied for 50th among all sports teams.

28. Tampa Bay Buccaneers - $1.8 billion
Back-to-back NFC South teams to start the list and both teams that dropped from last year. The Bucs had a 19 percent rise in value, but they were 24th among NFL teams last year.

27. Cleveland Browns - $1.85 billion
Even the Browns are worth well over a billion dollars. Cleveland actually jumped 23 percent in value. And yet, they still rank lower among NFL teams than they did last year. The Browns are 45th among sports franchises.

26. Kansas City Chiefs - $1.88 billion
Here's yet another team that rose in value, but dropped among NFL teams. The Chiefs value increased by 23 percent, but they were 21st last year.

25. Jacksonville Jaguars - $1.95 billion
Here's one of the risers. The Jags were just 27th last year (the last NFL team to make the top 50), but their value increased by 32 percent. That's enough to put them 42nd among all sports franchises.

24. Tennessee Titans - $2 billion
The Titans were big risers, as their value increased by 34 percent this year. They also remain one spot ahead of their AFC South rival, moving up from 26th last year.

23. Arizona Cardinals - $2.03 billion
The Cardinals cracked the top 20 NFL teams last year, but even a 31 percent increase in value wasn't enough to keep that spot.

22. Carolina Panthers - $2.075 billion
The Panthers are almost identical to the Cardinals, just like last year. They dropped three spots, despite a 33 value boost.

21. Los Angeles Chargers - $2.08 billion
The Chargers got a 36 percent boost in value, due at least in part to their move to Los Angeles. However, they still trail a different LA football team by a wide margin.

20. Oakland Raiders - $2.1 billion
The Raiders didn't make the list last year, but now they're in the top 20. Perhaps it's the upcoming move to Las Vegas that helped result in an impressive 47 percent increase. The Raiders are now 34th among all franchises.

19. Atlanta Falcons - $2.13 billion
It's a slight drop for the Falcons, which fall from 17th to 19th. Still a 27 percent jump isn't nothing to be upset about. Plus, they have that fancy new stadium set to open.

18. Indianapolis Colts - $2.18 billion
The Colts fell quite a bit, dropping from 14th to 18th. Several teams had 20 percent value jumps, but the Colts only increased by 16.

17. Minnesota Vikings - $2.2 billion
The Vikings slid up only one spot from last year, despite a 38 percent jump in value. However, they're not far behind the teams in the top 15 now.

16. Seattle Seahawks - $2.23 billion
Seattle just dropped out of the Top 15 this year. And that comes despite a 19 percent rise in value.

15. Pittsburgh Steelers - $2.25 billion
An 18 percent increase in value pushed the Steelers past the $2 billion mark. However, they still dropped from 13th to 15th.

14. Baltimore Ravens - $2.3 billion
The Ravens remain just slightly ahead of their rivals, thanks to a 19 percent value boost.

13. Green Bay Packers - $2.35 billion
The only team on this list publicly owned, the Packers are heading in the right direction for their shareholders. The Packers had a 21 percent increase. However, they're no longer a Top 10 NFL franchise.

12. Miami Dolphins - $2.38 billion
Miami was just 16th last year, but a 28 percent value increase helped them sneak into the top 12 among NFL teams. They're 25th among all sports franchises. Let's just go ahead and give Adam Gase all the credit, because why not?

11. Denver Broncos - $2.4 billion
Denver is exactly where they were last year: 11th among all NFL teams. They rose by 24 percent, good enough for 24th all among franchises.

10. Philadelphia Eagles - $2.5 billion
The Eagles stay in the top 10, but they were ninth last year. A limited rise in value is to blame. The Eagles only jumped by four percent.

9. Houston Texans - $2.6 billion
The lowest of the two Texas teams, the Texans actually dropped two spots. Much like the Eagles, they only rose by four percent.

8. Chicago Bears - $2.7 billion
The Bears were the highest ranked Chicago team, ahead of the Bulls, Cubs and White Sox among all sports franchises. It's no surprise the NFL one comes out ahead, since football is still king in America. A 10 percent jump kept the Bears in eighth place among NFL teams, they same spot they held last year.

7. New York Jets - $2.75 billion
This is one of two New York football franchises in the top 10. The Jets actually dropped a spot, thanks to an NFL team that skyrocketed in value.

6. Los Angeles Rams - $2.9 billion
This is why the NFL wanted a franchise (or two) in Los Angeles. The Rams DOUBLED in value this year and are now among the Top 10 teams. With a stadium that's still not finished, the Rams could keep rising up the rankings. Last year, the Rams didn't even make the list. That's an absurd jump.

5. Washington Redskins - $2.95 billion
Only a four percent rise in value resulted in the Redskins falling from third to fifth. They still crack the top five, but the minimal rise in value (relative to the rest of the NFL), holds them back.

4. San Francisco 49ers - $3 billion
Despite being in the midst of a long-term rebuild and the 49ers fans not always being happy with ownership, the Niners jumped in value this year. They rose by 11 percent, vaulting into fourth. The jump wasn't as massive as last year's, as the completion of Levi's Stadium boosted the value, but the Niners remain headed in the right direction.

3. New York Giants - $3.1 billion
As is the case with many of these teams, market matters. The Giants remain a really good football team, but playing in New York is why they're third on this list. They were actually behind the Redskins on this list last year, but jumped by 11 percent in value and pushed past their NFC East rival.

2. New England Patriots - $3.4 billion
The Pats jump in value wasn't as steep as it was last year (when NFL teams saw upwards of 20 percent growth in value). But, another Super Bowl title doesn't hurt the Patriots. Despite being worth $3.4 billion, they're still nearly a full billion behind the top NFL team. They're the third most valuable American sports team.

1. Dallas Cowboys - $4.2 billion
The Cowboys jumped by 5 percent this year and remain the only team worth at least $4 billion. There's still no Super Bowl title in the past 20 years for Dallas, but they remain most valuable franchise not just in football, but in all of sports.

Check out our NFL page for all the latest NFL rumors or Download the Chat Sports App!