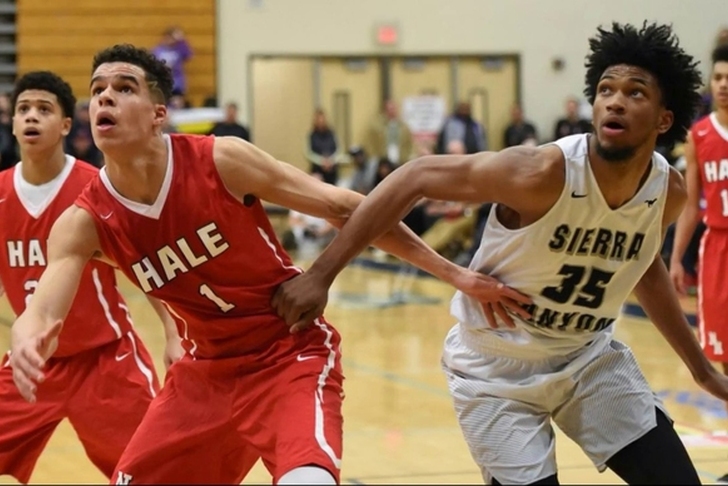 Freshmen seem to rule the college basketball world now, as all of the top high schoolers can often determine a college program's success for the next season before they move to the NBA. The incoming freshman class is not as deep as last year's loaded group, but there are a couple of franchise-caliber players in Missouri's Michael Porter Jr. and Duke's Marvin Bagley III. Those two stars figure to own the headlines all season, but a number of other freshmen will also have a major impact on the national stage. Here are the top 10 freshmen that you need to know about now:

Oregon figures to take a step back this season following the loss of stars Dillon Brooks, Jordan Bell, and Tyler Dorsey, but they're counting on Troy Brown Jr., the five-star guard from Las Vegas, to step up and play a major role for them. Brown has great size for a guard and can do a little bit of everything on the court, especially as a smart passer and defender. However, he's just an average athlete and needs to improve his consistency. Look for Oregon to use him in a variety of ways.

Duke brought in another top recruiting class this year, but outside of Bagley, Trevon Duval is the most important to their success this season. Duval is an elite athlete with outstanding quickness, vision, and a high basketball IQ, but his skill set is still developing. A lack of quality point guard play has plagued the Blue Devils for the last two years and they recruited Duval to fill that void, yet there are still major questions about his play. He has gotten by in his career due to his superior athleticism and needs to improve his shooting and finishing ability to make the real impact Duke is expecting him to have.

The first real marquee prospect to play for Jim Larranaga at Miami, Walker has all of the physical tools and athleticism to be a star in both college and the NBA. However, he suffered a torn meniscus in July, and while the Canes expect him back for the start of the season, they need him to be at 100 percent if they're going to compete with Duke, Louisville, and North Carolina at the top of the ACC.

Sexton doesn't have the size of an elite point guard prospect, but he's a dynamic athlete who is exciting to watch because of his quickness, vision, finishing ability, and defensive quality. Perhaps the most competitive player in this class, Sexton is expected to make Alabama one of the best teams in the SEC this season.

*Editor's Note: After the writing of this article, Sexton has been declared ineligible by the NCAA due to ongoing concerns stemming from the FBI investigation into college basketball.*

Every major player from last year's team returns for the Spartans, but Jackson is the biggest reason why many have Michigan State as a top three team in the preseason. Jackson has a 7-foot-4 wingspan and is a great athlete, giving him a ton of defensive upside as a shot blocker. He's competitive on the glass, runs the floor well and is a good finisher, yet needs to play stronger and improve his shooting. Jackson looks to be the perfect complement to star Miles Bridges.

This Kentucky team will be the youngest in the country thanks to seven incoming freshmen and Hamidou Diallo, who enrolled at Kentucky for the spring semester last year. However, out of all of them, Knox figures to be the player who will have the biggest impact one way or another. He has great size for a combo forward and is a good athlete, but needs to get stronger and improve his basketball IQ.

When things are going well, Knox will be a major problem for whoever Kentucky faces. However, if he stops being aggressive and makes poor decisions, he could be a liability.

Bamba will really benefit from Texas' weight program as he really needs to get stronger, but is a game-changing shot-blocker that will hold down the middle in the way Jarrett Allen was supposed to last season. His athleticism will also allow him to have the same impact at the faster pace Shaka Smart prefers.

The best true center prospect we've seen in some time, Ayton is a highly skilled big man who still has plenty of upside. Though he's not a super athlete, he's a good athlete with reliable post moves - and someone Sean Miller will utilize on every single possession. He's smart, a good passer, and a quality defensive presence. If the Wildcats are going to make the Final Four for the first time since 2001, Ayton will be the biggest reason why.

Porter is a dream prospect for whoever gets a top three pick in the draft. He's a good, fluid athlete who excels on the perimeter and around the basket with his smooth skill set. Unfortunately for college basketball fans, he may turn into this year's Ben Simmons or Markelle Fultz because of the team he plays on (the Tigers largely lack talent outside of him and his brother, fellow freshman Jontay). Missouri is expected to be a ranked team throughout the season due to Porter's presence. Can he deliver?

The conversation all season will be about whether Bagley or Porter will be the top pick in the 2018 NBA Draft, but there really shouldn't be much of a debate - Bagley is the better player and many scouts say he would've been the top pick had he been eligible for the 2017 draft. In fact, he shouldn't even be eligible for the 2018 draft. He reclassified and skipped his senior year in high school in order to play for Duke this year.

Bagley is an extremely versatile forward and a gamechanger in every sense of the word. He can handle the ball and attack the rim like a guard while having the rebounding and shot-blocking abilities of a true big man. Those skills, coupled with his fluid athleticism, make him a matchup nightmare. Don't be shocked if he becomes the third freshman to win National Player of the Year.