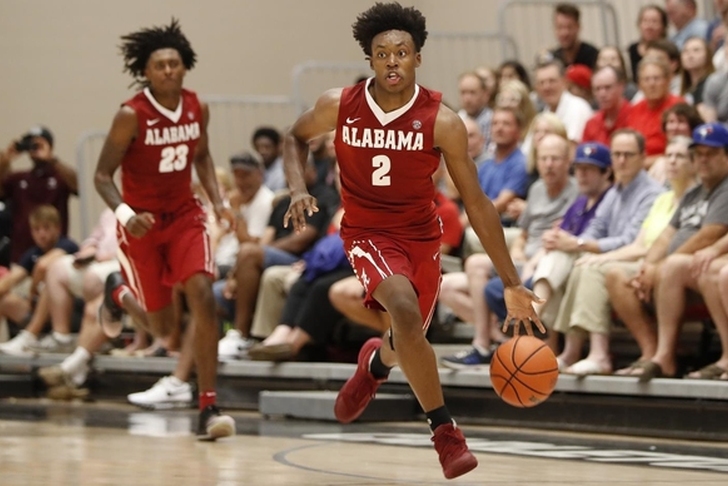 *Editor's Note: After the writing of this article, Sexton has been suspended one game for violating NCAA rules and Braxton Key, Alabama's leading scorer last season, suffered a torn meniscus in their final exhibition game.*

The Alabama Crimson Tide are in the middle of dominating another season of college football, but they're not the only team creating buzz on campus.

For Alabama's basketball team, this is the year they're expected to make the leap from being the middle-of-the-road SEC team to a legitimate player on the national stage.

"My excitement level is at an all-time high," Alabama head coach Avery Johnson said following the team's first practice. "This is our third year here in rebuilding our program and the energy and enthusiasm around our program is something that is definitely warranted. I'm so happy to be a part of the coaching staff that's leading this team into the season."

Much of the excitement surrounding the Tide has been overlooked thanks to the hype surrounding another SEC team in Missouri and superstar freshman Michael Porter Jr. - but don't get tricked into skipping past this Alabama team.

They return six of their top seven scorers from last season's NIT squad and welcome the nation's No. 6 recruiting class, headlined by five-star guards Collin Sexton and John Petty. Braxton Key, a member of the All-SEC freshman team last year, bypassed the NBA Draft to stay with this group, giving the Tide another go-to scorer with experience.

Sexton, in a sense, is the perfect metaphor for Alabama. He's not as hyped as the freshmen that will headline college basketball all season long, but he's a five-star recruit that outshined many his fellow top prospects during the spring's All-Star games. The 6-foot-2, 175-pounder plays with a giant chip on his shoulder and is looking to prove himself at all times.

For Johnson, he doesn't need to - he's everything he wants in a point guard.

“Collin is outstanding as far as his talent level and he’s gifted athletically," Johnson said. "At our Pro Day, his measurements... in the shuttle run, vertical jump, I mean, he’s off the charts for somebody that’s 6-2. This guy is as fast as anybody I’ve ever seen, collegiate or pro level.

“He’s talented but the great thing about him is he loves to win. He’s not beating his own chest. He wants Alabama to be good, and he’s very unselfish in the way he plays the game.”

Of course, this isn't going to just be the Collin Sexton show. Four starters and seven of the team's top eight scorers (73 percent of their total scoring) return from last season's 19-15 team, giving them plenty of experience.

That experience, coupled with this new influx of young NBA talent should allow Alabama to truly compete with the top teams in the country - and they'll find out exactly where they stand on the national stage early thanks to perhaps the most challenging non-conference schedule in the country. Along with participating in the Barclays Center Classic (where they will face BYU and Minnesota), the Tide will host UT-Arlington, UCF, Rhode Island, Oklahoma, and Texas - and have a road game against Arizona thrown in there.

Johnson doesn't see those tests being overly difficult for the Tide.

"That's the only thing I'm concerned about right now."

Just last month, like much of the rest of the college basketball world, Johnson had more to be concerned about with the FBI's investigation into the sport.

Kobie Baker resigned as Alabama's associate athletics director one day after news of the investigation broke after an internal investigation discovered that he may be involved in a corruption scheme involving the recruitment of a prospect believed to be Sexton. He reportedly accepted payment from Atlanta-based financial advisor Rashan Michel - a longtime friend of Baker's - in order to attempt to steer a prospect to him once that prospect declared for the NBA Draft.

However, the school concluded that Baker's actions did not extend past that and that the rest of the program was clean.

"Our review has not identified any NCAA or SEC rules violations, nor the involvement of any other coach or staff member," athletic director Greg Byrne said in a statement following Baker's resignation.

With that chapter believed to be closed, Johnson and the Tide have been looking forward to what the season hold on the court. Alabama was picked to finish fourth in the SEC with Sexton being tabbed as a preseason second-team All-SEC selection, yet both expect to finish higher than that.

"As you can tell by some of the preseason rankings and even within the SEC, there are a lot of people on the outside that's excited with our team and we want that to continue," Johnson said. "Our fans are excited as they have been in years, and we want to continue to seize that momentum."

“My first year we were picked 13th. Last year we were picked seventh. So we understand that there is going to be more responsibility when you get more attention. That’s what our players want. They want to be on the big stage. They want to have that type of excitement around our program. I like the additional pressure because it’s on the coach and our staff. Hopefully, we will play well.”

Alabama opens the season on Nov. 10 against Memphis as part of the 2017 Veterans Classic in Annapolis, MD. Tip-off is set for 6:30 pm ET on the CBS Sports Network.