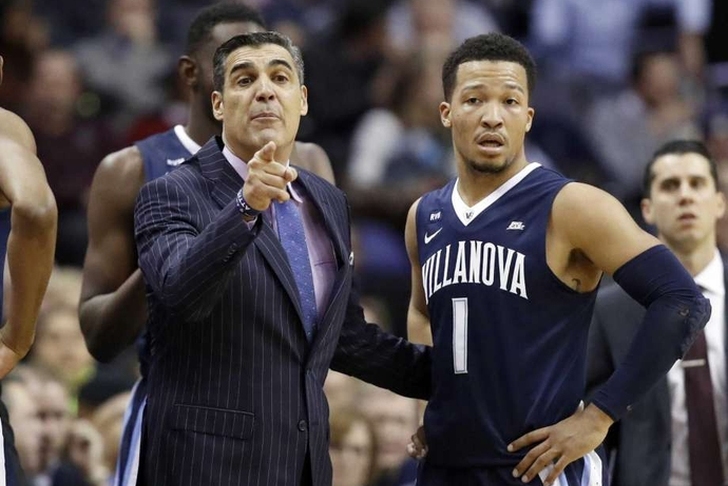 If you feel like more ranked teams are losing than ever before this college basketball season, that's because it's what's actually happening. There have been more unranked-over-ranked upsets to this point in the season than in any other season in the sport's history, and this week offered a clear picture of that pandemonium.

On the flip side of all of these upsets are a few teams that simply continue to win and have cemented themselves as the elite tier of teams. Villanova has been No. 1 for most of the season and continues to prove they deserve that ranking every week, while Virginia and Purdue continue to knock away all challengers.

There's also another tier slightly below that group of talented teams who, while they are flawed, are starting to round into form. Duke keeps winning (thanks to their offense) despite their defensive struggles as Kansas and Arizona are proving to be the class of their respective conferences (again).

How will all of the past week's games shake up these rankings? Here are my latest Top 25 Power Rankings:

The Sun Devils' struggles continued this week with a loss at Stanford, but they rebounded with a road win over Cal. They're only 3-4 in Pac-12 play after going undefeated through their non-conference slate, but five of those games have been on the road.

It was an absolutely disastrous week for the Wildcats as they fell to South Carolina on the road on Tuesday, lost to Florida on Saturday, and struck out on Zion Williamson (who committed to Duke). They've now lost three of their last five games due to their offensive struggles (failed to score more than 68 points in any of the three losses) and inability to shoot the three.

The Zags dropped their first test in a month against Saint Mary's at The Kennel as their defense was somewhat exposed - Gonzaga allowed the Gaels to shoot 56.6 percent from the field

Speaking of the Saint Mary's, they're back in the rankings thanks to that win over Gonzaga. They've now won 13 consecutive games and lead the nation in field goal shooting at 52.4 percent. Jock Landale (22.4 ppg, 10.2 rpg) is a legitimate All-American favorite.

Seton Hall suffered losses at Creighton and at home to Xavier this week and both games showed the Pirates' limitations. They have virtually no bench scoring, which other top teams have taken advantage of. Stars Angel Delgado, Desi Rodriguez, Myles Powell, and Khadeem Carrington account for over 75 percent of their offensive production.

Another mid-major on the list, Nevada is 7-0 in a tough Mountain West that is expected to get two or three teams into the NCAA Tournament. Their win over Boise State on Saturday was one of the most impressive of the weekend. Caleb Martin (19.7 ppg, 5.4 rpg) is the current favorite to win MWC Player of the Year.

Rhode Island, perhaps the best mid-major in the country, has ripped off 10 consecutive wins thanks to the nation's 23rd most efficient defense and a pair of stars in Jared Terrell (18.3 ppg) and E.C. Matthews (13.9 ppg, 4.4 rpg). They're also incredibly deep with six players averaging at least 6.5 points per game and may very well run the table in a down year for the A-10.

What happened to Wichita State? Their seven-game win streak was snapped with back-to-back losses to SMU and Houston, and the Shockers looked remarkably average in both games. Their usually-stingy defense was shredded by both backcourts and their offense was stagnant and sluggish. However, they shouldn't be tested again until their first showdown with Cincinnati on Feb. 18.

The Gators picked up two impressive wins this week at home over Arkansas and at Kentucky, putting them all alone in first place in the SEC with a 6-1 record. Point guard Chris Chiozza (12.3 ppg, 6.1 apg, 4.3 rpg) might be the most valuable player in the conference and is the engine that drives Florida's attack on both ends of the floor.

Hey, look who's back! Louisville has won four straight games to move to 5-1 in the ACC as it appears they're finally starting to figure it out under new head coach Dave Padgett. Their defense has been stingy all year (14th in adjusted defensive efficiency) but their offense is starting to find their groove, averaging 81.5 points during this win streak.

The Red Raiders suffered a pair of road losses to Texas and Iowa State last week. They've now lost three straight games on the road as their offense has struggled with star point guard Keenan Evans having off games. He shot a combined 5-20 inthose two losses, averaging nine games per game. They aren't good enough offensively to win when he struggles like that.

Auburn had their 14-game win streak snapped by Alabama this week, but rebounded with a big win over Georgia on Saturday. Their well-balanced attack (six players average at least 7.5 points per game) and dominant transition game have keyed their success this season.

Ohio State has won 12 of their last 13 games and is a perfect 8-0 in Big Ten play. They are an elite defensive team (11th in adjusted defensive efficiency) and have yet to lose on the road. Keita Bates-Diop (19.7 ppg, 8.9 rpg) may very well win Big Ten Player of the Year.

Is everyone panicking about Oklahoma yet? Following road losses to Kansas State and Oklahoma State in which Trae Young struggled (22/60 shooting with 19 turnovers in those two games combined), the lack of overall talent on the roster and over-reliance on Young has been abundantly clear. Still, all of the overrated talk can be quieted if they can beat Kansas in Norman on Tuesday.

Cincinnati has flexed their defensive muscle during their current 10-game win streak, never giving up more than 63 points while limiting seven teams to 56 points or less. That's why they have the No. 2 defense in the country, according to KenPom.com.

UNC still has some question marks but they continue to win, and in this climate, that's enough for their huge jump up these standings. Led by Luke Maye (17.8 ppg, 10.5 rpg) and Joel Berry II (17.3 ppg), the Heels have recorded notable victories over Notre Dame and Clemson during their four-game win streak.

WVU snapped a two-game losing streak with a dominant 35-point win over Texas, putting them back on the right track as they continue to try and work Esa Ahmad (13.7 ppg, 6.0 rpg) back into the fold following his suspension. The Mountaineers also have a tough week ahead of them with a road test against TCU tonight before hosting Kentucky on Saturday.

Xavier picked up their first road win over a ranked team on Saturday against Seton Hall as Trevon Bluiett (19.1 ppg, 5.5 rpg) and J.P. Macura (13.4 ppg, 4.2 rpg) continue to show that they're one of the best one-two punches in the country.

The Spartans grabbed a 28-point win over Indiana on Friday and, thanks to the wacky Big Ten schedule, have three games this week, which will be capped by Sunday's test against Maryland. They're one of only two teams in the country and rank in the top 10 in both adjusted offensive and defensive efficiency (Purdue).

Two weeks ago, Kansas looked extremely vulnerable and many were thinking this would be the year their reign at the top of the Big 12 came to an end. HA! All the Jayhawks have done since then is win five straight games - including a road victory over West Virginia - as they seem to have found themselves (thanks to Devonte' Graham emerging as a true leader). They tend to play up or down to their competition as all five of those wins have come by five points or less, but they have been able to make enough plays when they need to.

Duke's defense has not improved, but they still have the best offense in the country - which has been enough for them. Marvin Bagley III (21.9 ppg, 11.5 rpg) is playing like a first-team All-American and leads this potent group with all five starters averaging at least 12.1 points per game. Saturday's showdown against Virginia will be a must-watch game.

Speaking of Virginia, the Cavaliers are clicking on all cylinders right now with a 10-game win streak in which they haven't allowed more than 61 points. As such, it's no surprise that they have the nation's No. 1 defense in virtually every major metric. But do they have enough offense? We'll find out during this three-game stretch against Clemson, Duke, and Louisville.

Purdue hasn't lost since Thanksgiving and is the only team that ranks in the top five in both adjusted offensive and defensive efficiency - and also rank fifth nationally in both effective field goal percentage and effective field goal percentage defense. They'll face two tough tests this week against Michigan on Thursday and at Indiana on Sunday.

Villanova continues to prove that they're the best and most consistent team in the country with blowout wins over Georgetown and UConn this week. However, they'll be tested in the coming weeks with each of their next four opponents ranked in the top 44 of the RPI. Jalen Brunson (19.0 ppg, 5.2 apg) and Mikal Bridges (17.0 ppg, 6.0 rpg) should find themselves on All-American teams at the end of the year.