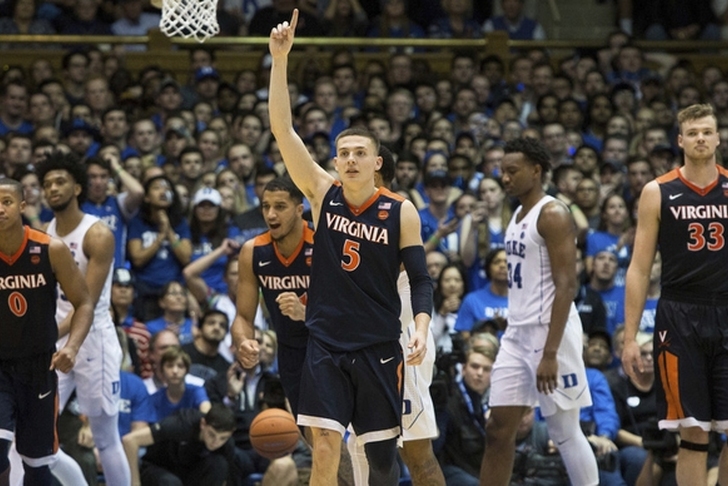 Upsets have ruled the college basketball season to this point, and while we're still a number of big ones over the past few days, this weekend was headlined by a number of statement wins.

The biggest statement was made by Virginia, who won in Cameron Indoor Stadium for the first time since 1995 by limiting Duke, who has the nation's highest-scoring offense, to just 63 points. It was a win that validated UVA as one of the truly elite teams in the country, and for me, it propelled them past Villanova (who is now limited due to the Phil Booth injury) for the No. 1 spot in the rankings.

Elsewhere, Kansas played their best game of 2018 with a dominant win over Texas A&M and Florida re-asserted themselves as one of the better teams in the country with a 21-point win over Baylor, but that wasn't the most impressive win of the Big 12/SEC Challenge. That belonged to Kentucky, who overcame two 17-point deficits to knock off West Virginia on the road thanks to a career-high 34 points from Kevin Knox.

Unfortunately, the biggest news of the week was the disgusting reports coming out of Michigan State involving both the football and men's basketball programs. If you're not up-to-date on all of that information, you can find everything here.

As we turn our attention back to the on-court happenings of the past week, here are my latest Top 25 Power Rankings:

Nevada had their seven-game win streak snapped in a 104-103 double OT loss at Wyoming, a place where San Diego State and Boise State have also already lost. It was their only game of the week, but they stay ranked because of the losses of other teams.

Tennessee returns to the rankings following wins over Vanderbilt and Iowa State last week thanks to a top-10 defense that has given up over 65 points just one time in the last seven games.

The Zags have rebounded from their loss to Saint Mary's with three consecutive wins, though all have come against much lesser competition. Gonzaga's offense has proven to be elite with six players averaging at least 10.5 points per game.

What a terrible week for UNC, losing to a pair of bubble teams in Virginia Tech and NC State. In both games, UNC's defensive struggles - and over-reliance on Luke Maye and Joel Berry II - were on full display. I break down those struggles in more detail here.

The Gaels have won 16 consecutive games since dropping back-to-back games to Washington State and Georgia during Thanksgiving week, including double-digit wins over BYU and Portland this week. I'd like to see their defense improve (though their lack of athleticism may keep that from happening) even though their offense (fourth nationally in adjusted offensive efficiency) is good enough to carry them, led by All-American candidate Jock Landale (22.1 ppg, 10.4 rpg).

Big man Angel Delgado (13.2 ppg, 12.0 rpg) set the Big East record for most career rebounds in the Pirates' win over DePaul on Saturday. That's another achievement in a great career for Delgado, but Seton Hall doesn't have any time to celebrate - they have one of their toughest weeks of the season upcoming. They host Providence on Wednesday before facing Villanova in Philadelphia on Saturday.

The Cardinals stay in the top 20 despite an overtime loss on the road to Miami this week. It was the third overtime game Louisville has already played in this calendar year, which is more than anyone else in the country. They'll have a chance to make a big statement on Wednesday when they face Virginia in a battle between the top two teams in the ACC.

The Gators were upset by South Carolina this week but looked awfully impressive in that win over Baylor. Chris Chiozza (12.6 ppg, 6.1 apg, 4.3 rpg) continues to be among the favorites for SEC Player of the Year.

Rhode Island, perhaps the best mid-major in the country, has ripped off 12 consecutive wins thanks to the nation's 19th most efficient defense, a pair of stars in Jared Terrell (17.9 ppg) and E.C. Matthews (14.0 ppg, 4.3 rpg), and Stan Robinson's buzzer-beater to beat Duquesne on Saturday.

The Shockers bounced back from a two-loss week with 19-point victories over UCF and Tulsa. However, they shouldn't be tested again until their first showdown with Cincinnati on Feb. 18.

WVU has lost four of their last five games since rising to No. 2 in the country and have blown big leads in all of those losses due to stretches where they simply can't score. Figuring out their half-court offense will be key to their turnaround (or continued downslide) in February.

No one may have had a better week than Kentucky, as they beat a game Mississippi State team on Tuesday before pulling off a 17-point comeback against WVU on Saturday. I called that game a "grow-up game" for the young Wildcats, as they showed a grittiness and toughness we hadn't seen from them this season. It also served as the breakout game for Knox, who finally played like the lottery pick he is projected to be.

Ohio State suffered their first Big Ten loss on this half-court buzzer-beater to Penn State, so I can't downgrade OSU too much - especially with all the other teams that lost. If anything, Keita Bates-Diop (19.9 ppg, 8.6 rpg) solidified himself has Big Ten Player of the Year frontrunner with the three huge three-pointers he hit down the stretch.

Another team that lost but stays in the same spot is Oklahoma thanks to their win over Kansas on Monday. OU's defense needs to improve and Trae Young (29.6 ppg, 9.6 apg) is going through a bit of a slump, but the Sooners will only go as far as the supporting cast takes them. We know Young is going to produce while defenses are trying to limit him - it's on everyone else to make their opponents pay for that.

The Red Raiders snapped a two-game losing streak with a home win over Oklahoma State and then went on the road to beat a quality South Carolina team that was coming off of recent wins over Kentucky and Florida. When Keenan Evans (17.7 ppg, 3.4 apg) plays well offensively, Texas Tech is extremely tough to beat. However, when he struggles to score, they lose.

Auburn continues to win and cracks the top 10 for the first time all season following double-digit wins over Missouri and LSU. They have a well-balanced attack with an explosive offense (10th in adjusted offensive efficiency) that is lethal in transition.

Cincinnati continues to win on the strength of a defense that hasn't given up more than 60 points since Christmas, including holding three opponents under 50. However, they'll face their first real test since Jan. 7's win over SMU on Wednesday against Houston.

Xavier has won four consecutive games and was dominant in a 19-point win over Marquette on Wednesday. Trevon Bluiett (18.9 ppg, 5.7 rpg) and J.P. Macura (13.0 ppg, 4.3 rpg) lead the nation's eighth-best offense, according to KenPom.com.

The Jayhawks had their best performance of the month in Saturday's win over Texas A&M, but the Aggies aren't exactly a tough test given the way they're playing right now. They'll try to build on that tonight against Kansas State. Remember, they only beat the Wildcats by one in Allen Fieldhouse earlier this season.

The Spartans continue to win despite the off-court scandal at the school, beating Illinois and Wisconsin at home before coming back to beat Maryland in College Park on Sunday. A road game at Indiana is looming large on Saturday.

I'm not going to knock Duke too much for that loss to Virginia given how good the Cavaliers are and the other wins the Blue Devils have on the year. Marvin Bagley III (22.0 ppg, 11.6 rpg) will try and lead Duke to a bounce-back win over Notre Dame on Monday - with their first matchup against UNC (in Chapel Hill) looming next week.

Purdue hasn't lost since Thanksgiving and is the only team that ranks in the top seven in both adjusted offensive and defensive efficiency - and they also rank in the top nine nationally in both effective field goal percentage and effective field goal percentage defense. However, they've only beaten one ranked team (Michigan) since December. They now enter their toughest stretch of the season with their next four games coming against Maryland, at Rutgers, vs. Ohio State, and at Michigan State.

Villanova drops to No. 2 through no fault of their own as they beat Providence and Marquette this week. However, the injury to Phil Booth (11.6 ppg, 3.3 rpg), who is out indefinitely with a broken hand, gives me questions about their depth, which is why they fall one spot (for now). Even though Donte DiVincenzo (13.7 ppg, 4.4 rpg) has stepped into the starting role and will keep that group rolling, Dhamir Cosby-Roundtree (3.7 ppg, 2.5 rpg) is the only other bench player who has appeared in every game.

Following the win over Duke, Virginia has now won 12 straight games. In fact, their only loss this season came at West Virginia, giving them the strongest resume in the country. They have the nation's best defense, have never given up more than 68 points in a game this season, and have kept six of their last 11 opponents below 50 points.

However, we also saw their ability to produce on offense in that game against Duke with Kyle Guy (15.2 ppg), Devon Hall (12.7 ppg, 4.3 rpg) and Ty Jerome (9.5 ppg, 3.4 apg) all hitting big shots. They're playing as well as anyone right now, and given new questions about Villanova, they take the No. 1 spot.